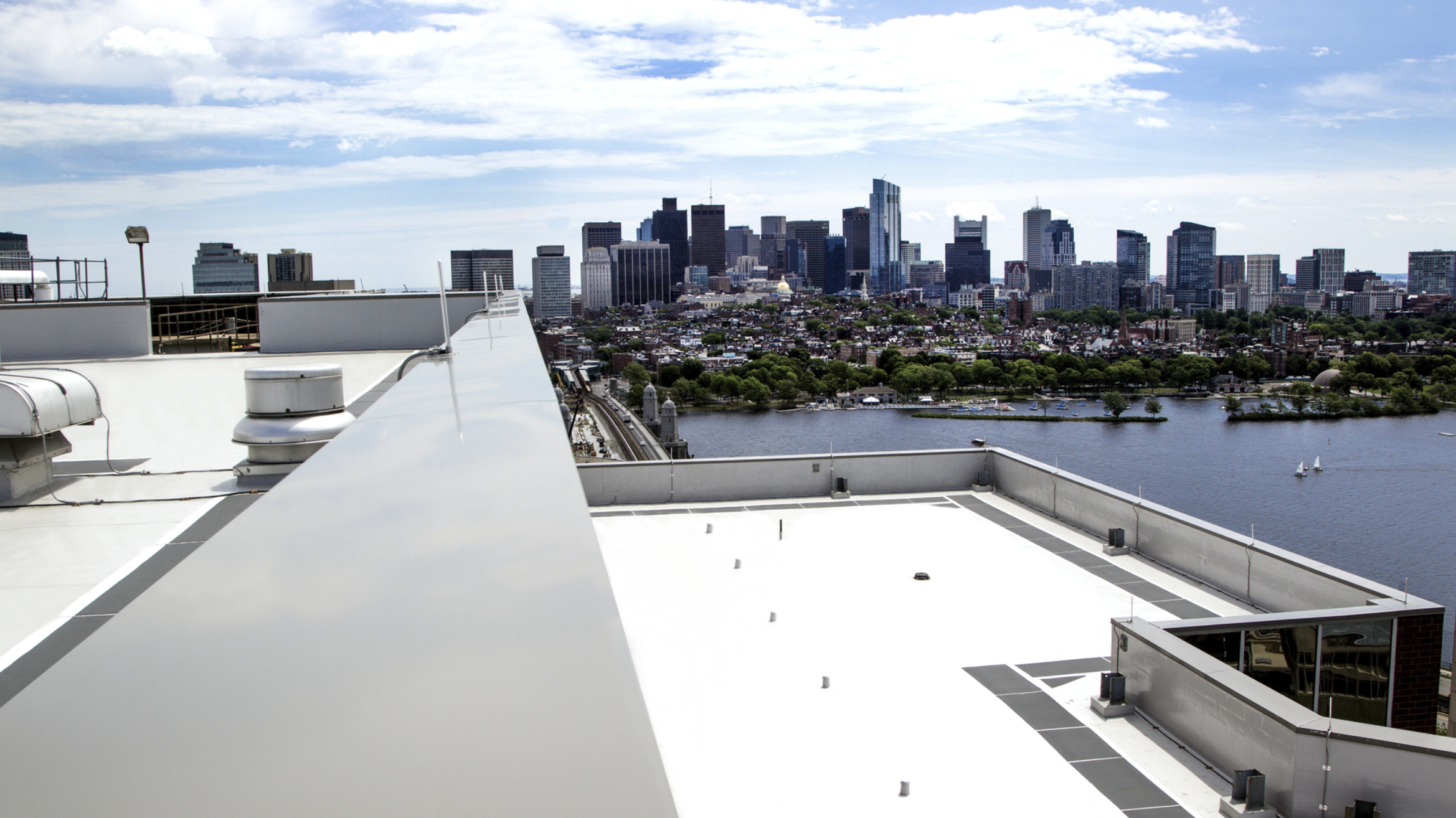 Replacing the roof on an occupied building with multiple tenants means not only meeting the needs of the building owner but several other businesses as well. When the roof is high above a busy metro area, the job can be even more demanding, but when the failing roof on a CBRE Group high-rise in Cambridge, Massachusetts, needed to be replaced, Commonwealth Building Systems was up to the challenge.

Located near the Longfellow bridge across the Charles River from downtown Boston, the building houses a variety of business and retail tenants. RMX Northeast Inc., the consultant on the project, specified the use of a PVC roofing system from Duro-Last to replace the existing stone-ballasted system and invited local contractors to bid on the project. Commonwealth Building Systems of Rockland, Massachusetts was awarded the job.

Commonwealth is a commercial roofing and sheet metal contractor that focuses on the Boston and Cambridge area. Daniel Hulverson, principal at Commonwealth Building Systems, knew the logistics on the project would be a challenge. Due to construction taking place on the Longfellow Bridge at the time of the project, traffic in the area was diverted around the building, and use of a crane was limited to Saturdays. The Commonwealth team commissioned the use of a 300-ton crane on two consecutive weekends to remove the stone ballast, pavers, and existing EPDM membrane from the 180-foot-tall, multi-level roof.

“The ballast removal was probably the hardest part of the project,” Hulverson recalls. “We couldn’t do any work doing the week because of the tenants for one, because of the noise, and the Longfellow Bridge was under construction at the time. It was actually closed, so traffic was pretty much a nightmare.”

R.K. Hydrovac was called in to remove the stone ballast. The crane was used to hoist the vacuum hoses to the roof. “It was quite an undertaking on their end,” Hulverson says. “We got the stone ballast off and got all of the stock up there on two consecutive weekends. Actually, after the first weekend we were able to get started roofing. We stockpiled all of the trash and got most of the trash off on the second weekend. We had a couple more crane days to get trash out at the end, so we had maybe four of five crane setups in all.”

The new roofing system was designed to stand up to the area’s high winds. Leaving the existing insulation in place, the Commonwealth crew covered each roof area with 2 additional inches of Duro-Guard ISO II insulation, which was mechanically attached. The upper roof was above a steel deck, and the lower roof covered a concrete deck, so different fasters were used, but the fastening patterns were identical.

After the insulation was in place, the Duro-Last PVC membrane was attached using the Duro-Bond induction welding system. The membrane is delivered custom fabricated to fit the site. “Duro-Last comes out and pre-measures the job with our assistance, and then the sheets are made,” Hulverson says. “They give you a map and tell you where the sheets go. They measure around all of the penetrations, and everything is pre-cut. It’s pretty cool how it comes out. The rolls are listed A, B, C, D, and so on, and you just kick out the rolls and weld them in place. The sheets are pre-welded at any laps, so it reduces the amount of welding you are doing on the job and saves time.”

The Duro-Bond system uses specially coated plates that are screwed down to the deck before the membrane is put in place. The membrane is adhered to the plates using an induction welder.

Work began on the upper level and moved down to the lower level. “We went from side to side, working our way toward where the crane setup was going to be,” Hulverson explains

The upper roof was constructed over a mechanical room, so crews could work any time without fear of disrupting the tenants. Work hours were restricted on the lower level because it covered occupied business space. “We had to switch to very early hours in the morning because of the noise,” Hulverson notes. “We were starting at three in the morning so we didn’t disrupt the tenants.”

Staging areas were moved as the project progressed to limit the possibility of damage to the completed sections of the roof. On the last day, the roof membrane was protected by tarps and plywood as the final loads of debris were removed.

The safety concerns were straightforward. “There was a parapet wall that was above 42 inches high around the whole perimeter of the building, so safety-wise, this job was fairly easy for us,” Hulverson says.

Custom-fabricated curbs and stacks were utilized to help reduce rooftop labor. “All of Duro-Last’s curbs and pipe seals come pre-made, and they are all listed on that diagram,” Hulverson says. “You just unfold them and weld them. The corners are already pre-done. It’s a very nice system.”

Commonwealth’s sheet metal division installed all of the edge metal, which was custom fabricated by EXCEPTIONAL Metals. “Again, Duro-Last measures everything along with our superintendent, and it’s all sent out prefabrication,” Hulverson says. “The pre-assembled wall cap was installed on top of the walls.”

During the last phase of the project, Walkway pads were welded down in high-traffic areas.

Luckily, weather wasn’t a key factor. “There were some challenging windy days, as there always are in Boston, but nothing I can really remember that slowed us down to the point we couldn’t work,” says Hulverson. “The weekend crane setups and the size of the crane were unusual, but other than that it was a pretty smooth job. And the views are beautiful — you’re looking across the Charles River into Boston, so it was pretty nice.”

Commonwealth’s dedication attention to detail on this project earned the company Duro-Last’s 2018 Edge-to-Edge & Deck-to-Sky Award, which was presented in 2019. “Duro-Last was impressed by the neatness of the job, especially the wall flashing,” Hulverson says. “They were impressed with our workmanship. If there were any challenges or changes, we just met them head on and moved forward, like we typically do. The customer is always first.”

Hulverson believes the key to ensuring quality workmanship is dedicated employees, from top to bottom. “Our foremen are well trained, as are our superintendents, and I actually look over the jobs in the field as one of four owners,” he says. “We make sure the quality and craftsmanship are done the right way.”