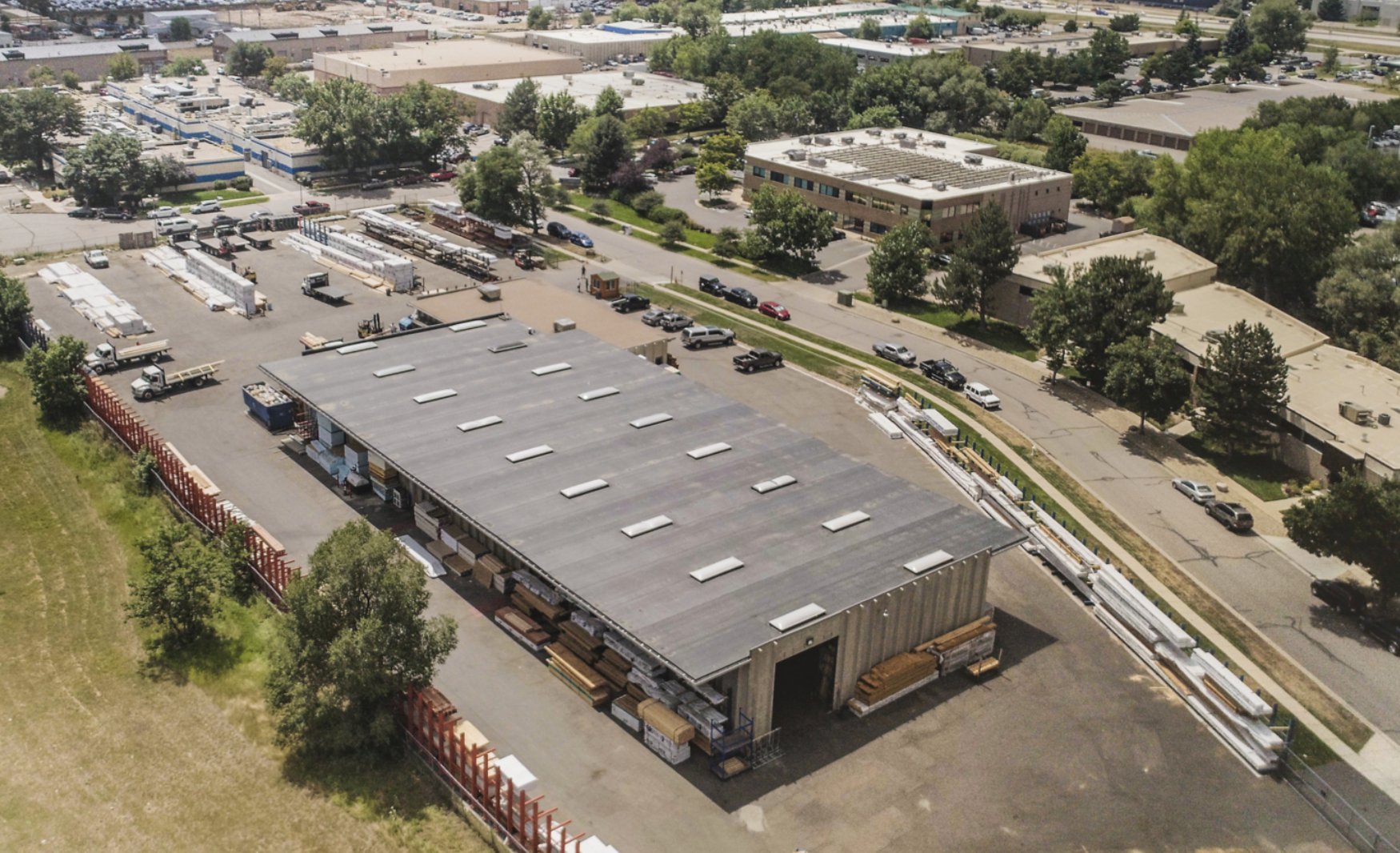 Since 1927, Boulder Lumber has served the building contractors of Boulder, Colorado, providing lumber, millwork, doors, windows, decking, and other building materials. In 2019, Boulder Lumber’s built-up tar and gravel roof needed to be replaced, largely because of damage caused by wind events. The wood nailer at the perimeter had become dislodged and the built-up system had begun to peel back from the concrete deck.

The city of Boulder is located in the Boulder Valley where the Rocky Mountains meet the Great Plains. Wind uplift is a major concern for buildings in this area, as high winds come off the canyons from the Rocky Mountains. The wind intensifies as it travels over buildings, which creates high pressure at roof perimeters. Winter conditions in Boulder range from mild to bitterly cold, with an average of 88 inches of snow per season.

The unpredictable weather in northern Colorado shortens their roofing season compared to other areas in the country. Winters can be very cold, and the Boulder area receives an average of 88 inches of snowfall per season.

When selecting a new roof for the 19,512-square-foot warehouse, Boulder Lumber was looking for something with excellent wind uplift resistance to avoid the problems they’d experienced in the past. They also wanted a system that could be installed quickly in a variety of temperatures, since the weather in Boulder can be very unpredictable and the labor market is tight. Lastly, they wanted to work with a skilled, dependable roofer who would get the job right the first time around.

Boulder Lumber enlisted Black Roofing to install a tough, durable roofing system that would be able to withstand the high wind uplift pressures at the perimeter of the roof. Black Roofing suggested Versico’s RapidLock Roofing System due to the ability of this roofing system to perform well in this environment.

The RapidLock Roofing System uses Velcro Brand Securable Solutions’ hook and loop attachment method to provide a fully adhered system without adhesives. The backing on the VersiFleece membrane attaches to a specialized facer on the insulation boards.

The 20-year-old existing built-up roof system had to be torn off to the structural concrete deck, including scraping residual asphalt.

Because of the damage to the concrete deck, the existing wood nailer was deteriorating. Black Roofing decided to use Metal-Era’s Eliminailer to provide a strong connection on the perimeter and protect the roof against high winds.

Black Roofing used CAV-GRIP 3V to prime the deck. The product promotes adhesion and can be used in temperatures as low as 15 degrees Fahrenheit when used as a primer.

Flexible DASH Adhesive was used to adhere a layer of 1-inch SecurShield Polyiso insulation to the concrete deck. Alan Nedelea with Black Roofing says, “We used Flexible DASH to eliminate any of the fasteners that would have been needed to penetrate into the concrete deck, and also to provide a good adhesion for the wind uplift required for this system.”

A layer of 6-inch SecurShield HD RL was then adhered to the base layer. The product has a specialized facer that allows for membrane attachment without using adhesives.

VersiFleece RL EPDM was attached to the SecurShield HD RL. Black Roofing simply positioned the RapidLock EPDM sheets, removed the release liners, then broomed and rolled the membrane into place. Once the job was complete, a 15-year, 55-mph wind speed warranty was issued.

Nedelea cited the roof system’s wind uplift resistance and the lack of temperature restrictions for installation as the key reasons it was chosen for this project. He also pointed to RapidLock’s labor-saving benefits, which allow the roofing system to be installed in far less time than a traditional roofing system.

“This is the first RapidLock roofing system that Black Roofing has installed,” Nedelea says. “We really enjoyed doing this project.”

Re-Roofing a Planetarium Under the Stars