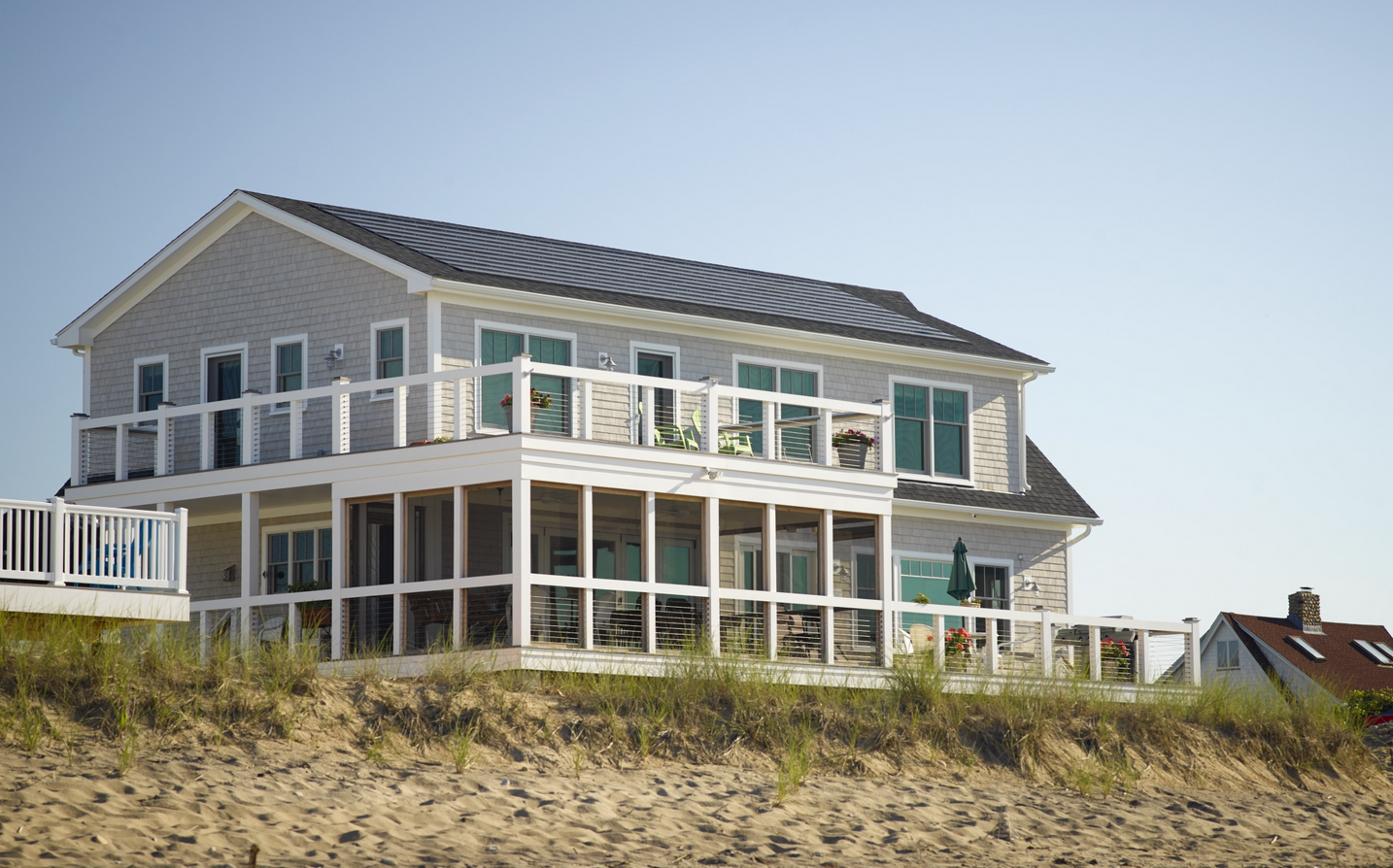 Dave Caldwell doesn’t have to travel into the future to see how a sustainable beach house—a complete rebuild of a home destroyed by Hurricane Sandy—in Westerly, R.I., will survive the next major storm. Half an hour northeast along the coastline, on the ocean side of Narragansett Bay, stands a testament to resiliency, another new home that Caldwell built in October 2012, just two weeks before Sandy swept in. 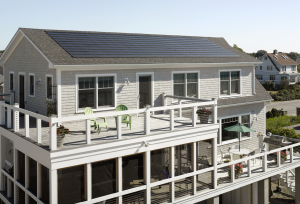 Featuring the same asphalt laminate shingle and integrated solar shingle roofing system, the Narragansett Bay home weathered the worst storm to hit the Ocean State in more than half a century, emerging unscathed while 1,000 other coastal Rhode Island properties incurred a combined $35 million in damage. The home’s survival demonstrated the power of construction techniques used to protect against the forces of nature—techniques that Caldwell repeated in the re-creation of the Westerly home.

For Caldwell, the second-generation owner of North Kingstown, R.I.-based Caldwell & Johnson, a design-build firm founded in 1968, the construction industry’s response to Hurricane Sandy only validates an approach to sustainable building that emphasizes long-term value over one-time costs. He says the owners of the Westerly home, a retired couple from South Carolina, were not afraid to put a little money into making the building stout and durable after their previous home was destroyed by the storm. “The goal,” he says, “was to sit and watch the next category 5 hurricane blow through.”

HURRICANE DESTRUCTION AND ITS AFTERMATH

It’s a good thing nobody was at the Westerly home in late October 2012 when 15-foot waves carrying softball-sized stones and tons of sand crashed onto Misquamicut State Beach. The structure there at the time was a bedrock of family tradition, an annual summer destination for the owners and their children and grandchildren. But without insulation to even keep out cold air in winter, it was no match for flooding and gale-force winds. Caldwell describes the storm’s impact in neat and peaceful terms. “After the tidal surge, not much of the house was left,” he says. “Where the living room used to be, there was a 4-foot pile of sand.”

Commissioned to rebuild using the maximum footprint allowed by regulatory agencies, Caldwell designed a flood-resistant foundation using concrete footings and pilings reinforced with rebar and breakaway walls at ground level so the rest of the house will not be compromised by the next big storm. The whole house received airtight insulation, efficient heating and cooling systems, and a third-party-verified air quality measurement that combined to achieve a silver rating by the National Green Building Standard, which is maintained by the National Association of Home Builders, Washington, D.C.

Caldwell gets a lot of customer requests to add rooftop solar panels. Many times he says no because of shading impacts or suboptimal roof orientation that can limit energy production. When site conditions allow for solar, Caldwell usually brings in a subcontractor for the installation. For high-end projects with an aesthetic that requires preserving the architectural integrity of the roofline, Caldwell has his own construction crew, led by foreman Dwayne Smith, install solar shingles that integrate with traditional shingles to form a seam- less roof system. Smith went through a manufacturer’s training program to become a certified roof shingle and solar shingle installer, making Caldwell & Johnson eligible for warranty protection from the supplier and demonstrating to customers that the firm is serious about the product.

Traditional solar panels would not have been suitable for the Westerly beach home, because durability was a principal concern for the client, a retired physicist. 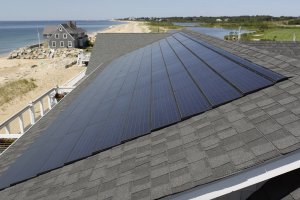 Traditional solar panels would not have been suitable for the Westerly beach home, because durability was a principal concern.

“Durability is a key component of sustainable green building,” Caldwell explains. “Oceanfront homes in our region are exposed to some pretty harsh elements throughout the year, including high winds, ice, salt and more. Fortunately, the individual components of the integrated solar system are up to task, and the fastening system allows the entire array to be secured directly to the roof deck as an integral unit.”

Caldwell was able to easily dispel the concern by referring to the Narragansett Bay project that survived Hurricane Sandy, where his team had installed solar shingles for the first time. “That home came through the storm with no problem at all. The solar energy system turned on and hasn’t had a problem since,” he says.

If the conditions in Rhode Island don’t provide enough assurance that solar shingles can withstand the worst that Mother Nature has to offer, Caldwell can also point to an installation he’s put on his own ski house in the White Mountains of New Hampshire, about 4,000 feet above sea level. “If you wanted to test this stuff, that’s getting on the outer edge of the bell curve,” he says. “I wouldn’t put traditional solar panels there. It would be too dangerous. But in pretty harsh conditions, the solar shingles work great.”

IBHS and FEMA Prepare Homes and Businesses for Natural Disasters