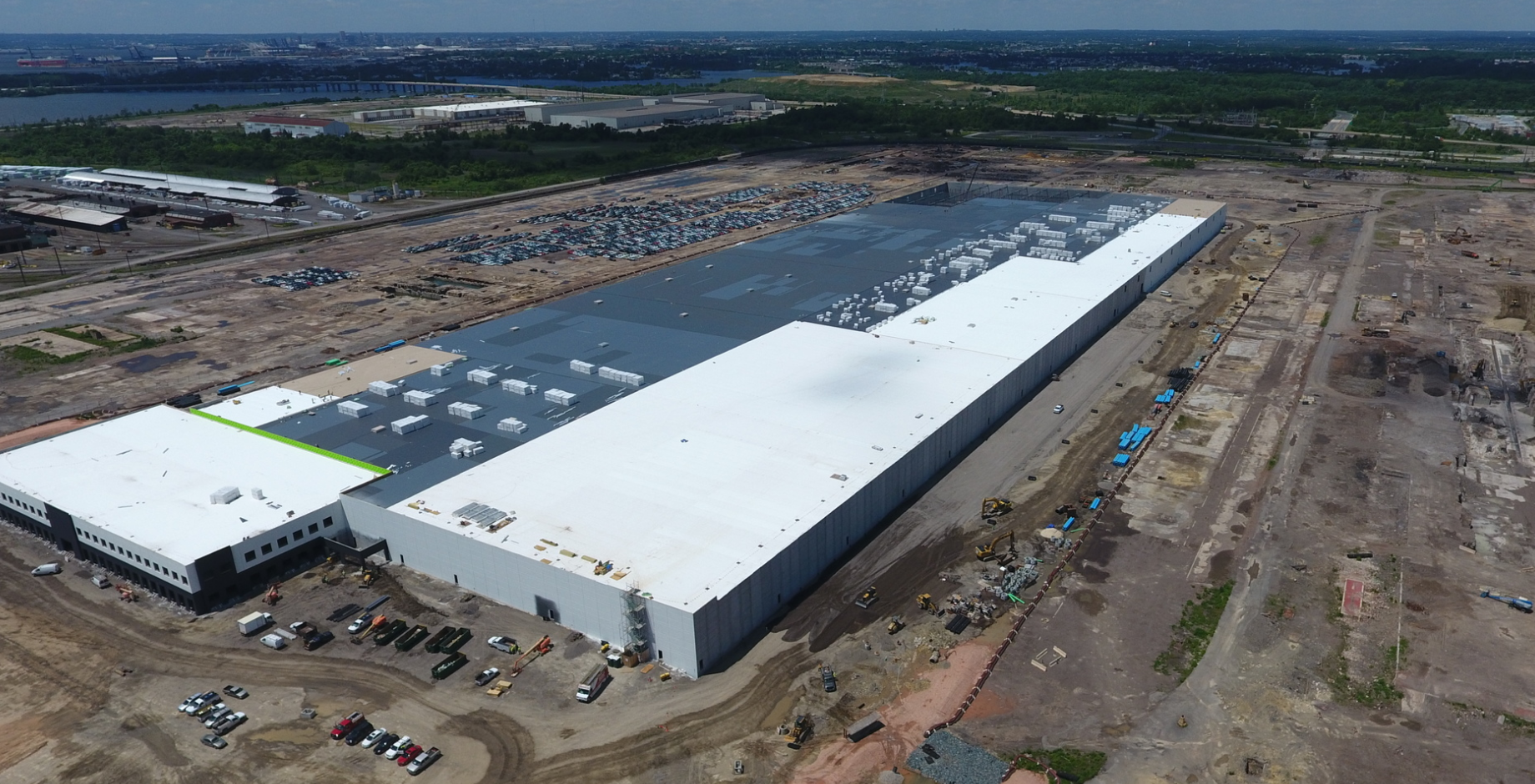 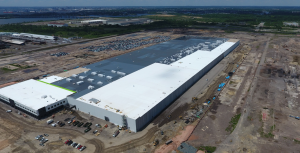 Industrial projects exceeding one million square feet of roofing might give some contractors pause, but at Orndorff & Spaid Roofing Inc., it’s just another day at the office.

The third-generation family run roofing contractor has been in business since 1953. Orndorff & Spaid services the Baltimore-Washington metro area, as well as parts of Virginia, Pennsylvania, and Delaware. It focuses primarily on large-scale commercial projects, including warehouses, distribution centers, retail businesses, schools and data centers.

Orndorff & Spaid routinely tackles roofing projects up to 1.5 million square feet. The company strives to keep as much work as possible under its own control, and the necessary supplies and equipment are always on hand at its 13-acre headquarters in Beltsville, Maryland.

“We’re a little bit unique as a roofing company in that we self-perform almost everything,” says Richard Harville, vice president of estimating. “We have our own cranes, all our own lifts. We do our own trucking. We have an in-house mechanic’s shop that repairs all of the equipment. All fuel servicing is done from our yard here. We also warehouse a fair share of material here because the logistics of running a job.” 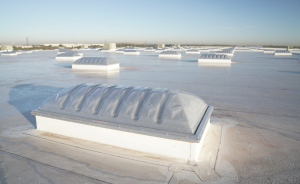 A recent new construction project at the former location of a Bethlehem Steel factory in Tradepoint St. John’s was right up their alley. “This was a new construction project, fairly conventional in most regards except for one, and that had to do with the site,” notes Harville. “Most of the site had been infilled over the years, and there was a lot of slag and other materials on this site, so it is not bedrock, for sure.” Due to the potential for movement, seismic expansion joints were specified. The gaps in the deck were as wide as 9 inches.

The owner of the complex was kept under wraps during construction phase, but the completed Under Armour distribution warehouse is now an area landmark. The roof encompasses 1,286,000 square feet, and the project had to be completed under a very tight schedule.

The general contractor on the project, FCL, reached out to Orndorff & Spaid during the design phase, and they recommended a TPO roof system manufactured by Johns Manville.

The Clock Is Ticking

Work began in April 2017 with a deadline to finish by the end of July. “The schedule was what made this project difficult,” notes Harville. “They had an end user set to come in and they were in an extreme hurry to get this thing done.” 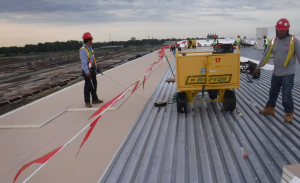 Harville and Spraker were confident the experienced team would be up to the task. “Once we got our bearings, we rock and rolled this job,” Spraker says. “We had up to 40 employees on the site and worked six days a week.”

The roof system installed over the structure’s metal deck included two layers of 2.5-inch polyiso and a 60-mil TPO membrane. “This job was mechanically attached at 6 inches on center, with perimeter and corner enhancements as required by FM,” notes Grudzien.

The roof installation began with a 10-man crew, and crews were added as the work ramped up. “We ended up with four 10-man crews, with the foreman on the first crew in charge the team,” Spraker recalls. “We just did as much as we could every day and kept track of everything. We averaged 700 squares a day. One day we did 1,000 squares.”

Crews worked on half of the building at a time, with falling back as needed to install flashings or strip in the gravel stop. “We started on one side of the building and went from end to end, following the steel contractor,” says Spraker. “When we finished one side, we came all the way back to the end where they started and followed them down the opposite side.” 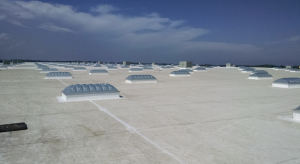 The roof also incorporated 276 VELUX skylights to illuminate key areas of the facility. Logistics Lighting delivered them all in one shipment, as Orndorff & Spaid requested. The 4-foot-by-8-foot skylights were stored on site and loaded to the roof with a crane for installation after a plasma cutter was used to cut holes in the deck. Prefabricated curbs were installed and flashed. “I had a separate crew designated just to install skylights,” Spraker notes

Safety precautions included perimeter warning lines, and workers outside that area were tied off 100 percent of the time, as they were when the skylights were installed. AES Raptor TriRex Safety Carts were used as anchor points.

Safety is always crucial, notes Harville, and the company makes it a priority on every project. “Our safety parameters go above and beyond standard state or federal mandating,” he notes.

The scope of work included large external gutters, downspouts and edge metal. According to McKinney, the sheet metal application was pretty straightforward. “There was just a lot of it — long, straight runs down two sides,” he says. “The coping was installed on the parapets on the shorter ends.” 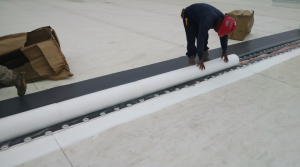 Gutters were installed after the roof system was in place. “The roof wasn’t 100 percent complete, but once areas of the roof were installed and the walls were painted white, we could begin to install the gutters,” says McKinney. “After work was completed on one side, crews moved to the other side.”

The large gutter featured internal and external hangers, alternating 36 inches on center. All the metal was fabricated in house, and the exterior hangers were powder coated to match the steel. 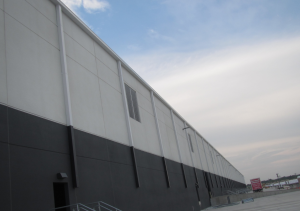 Installation of the downspouts had to wait until the walls were painted. One wrinkle was the change in color of the downspouts. About two-thirds of the way up the wall, the paint scheme went from black to white, and the building owner wanted the downspouts to change colors to match. “We reverse-engineered it,” notes McKinney. “We measured from the paint line up and put in a 30-foot section of downspouts there, because we put our bands at the joints and we didn’t want to have the bands too close together in the middle of the wall.”

The project was completed on budget — and a month early. FCL hosted a barbecue to celebrate. “FCL had a big cookout for the contractors with a steak dinner for everyone,” notes Harville. “They really went over and above on that.”

The Orndorff & Spaid team credits the effort of all companies involved for the success of the project. “The steel contractor was phenomenal, and FCL did an excellent job of coordinating everything,” Spraker says. 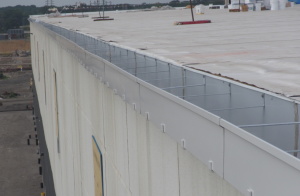 The manufacturer also did an excellent job, notes Harville, who commended the work of Melissa Duvall, the JM sales rep on the project, and Barney Conway, the field rep, who visited the site at least once a week. “JM did a good job keeping us well stocked with material and getting us deliveries when we needed them,” Harville notes.

The team members at Orndorff & Spaid believe their confidence comes from experience and knowing that most of the variables are under control. “A lot of that has to do with the equipment we can bring to bear when we need to,” Harville states. “We control the logistics all the way through. Most companies are going to rent a crane or hire trucking — we do all of that. We have our own lifts, we have our own cranes, we do all of our flatbed trucking. We bring a unique process to the table. Beyond that, and our project managers are well versed at doing this. It’s not our first rodeo.”

Seal and Flag Breaches During Inspection

Be the first to comment on "Commercial Roofing Contractor Flexes Its Muscles on 1.3 Million-Square-Foot Project"