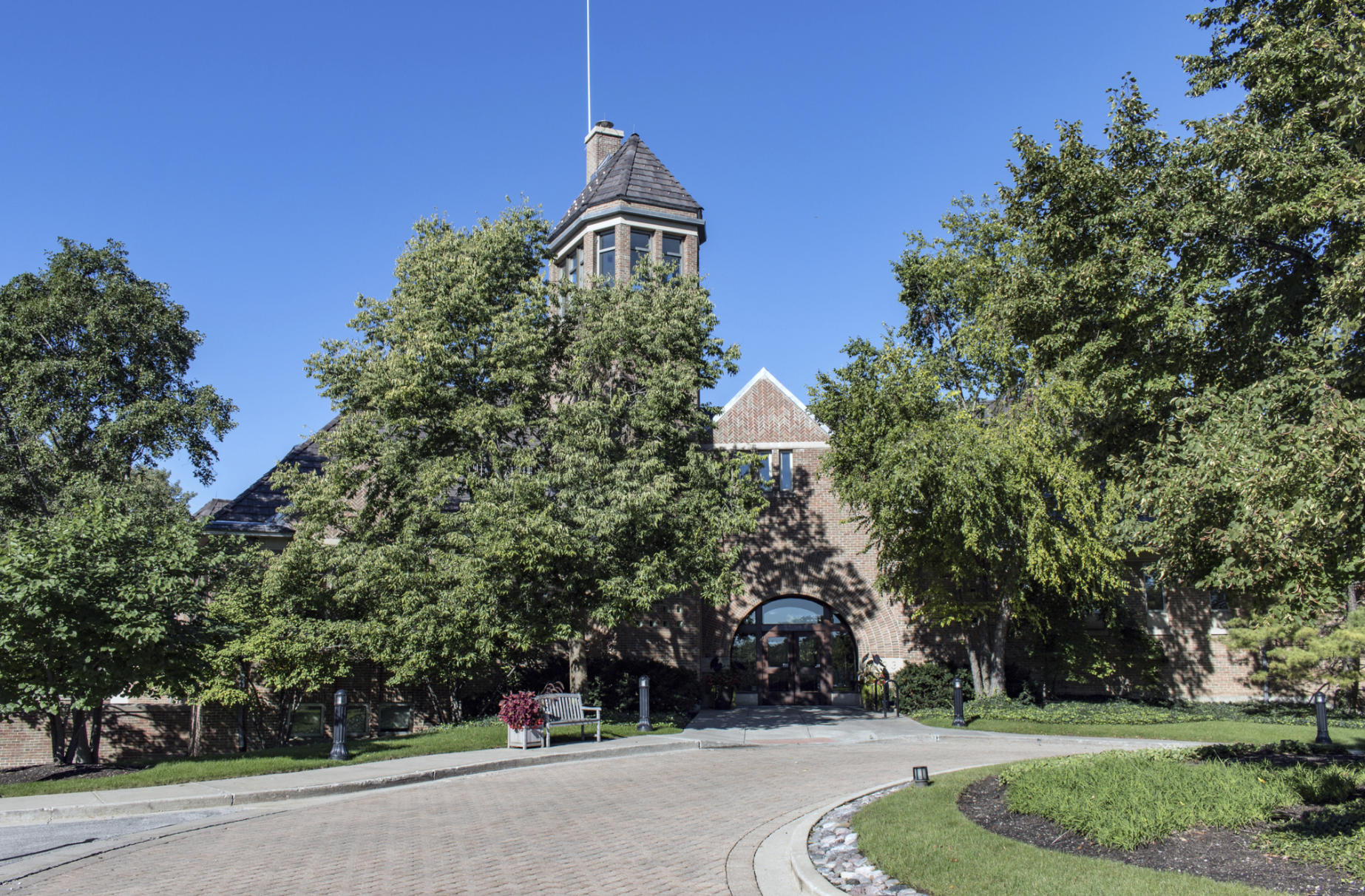 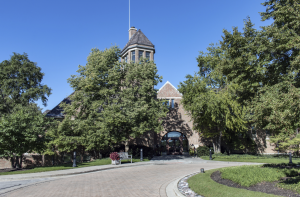 The Lincolnshire Village Hall, located in Lincolnshire, Illinois, houses city departments and the offices of elected officials, as well as the Lincolnshire Police Station. When its natural cedar shake roof and inlaid gutter system began to fail, city officials looked for a solution that would provide the desired aesthetics but last longer and require less maintenance.

Dale Pole of All American Exterior Solutions, a full-service union roofing contractor headquartered in Lake Zurich, Illinois, thought he had the answer. Pole, a 32-year industry veteran who is now the company’s vice president of operations, dropped off samples of a synthetic shake roofing tile manufactured by DaVinci Roofscapes and asked if city officials wanted to give it a try.

All American was awarded the job in 2016. The scope of work consisted of a complete re-roof of the complex, including the steep-slope roof system on the hall and tower. The project also included five sections of flat roofing and replacement of the copper gutter system. The job was complex, but All American was up to the challenge. The company worked in conjunction with Illinois Roof Consulting Associates, located in McHenry, Illinois.

The building’s signature feature is the observatory tower over the main entrance, which extends approximately 45 feet in the air. The main roof features a pitch change at the rear of the building, where the roof goes from 4:12 to 12:12. All 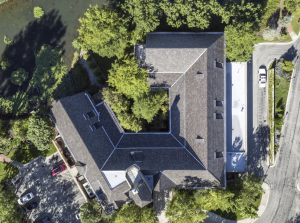 The complex is located right next to a large pond and bordered by mature trees, so the jobsite limited access to sections of the roof. Photos: DaVinci Roofscapes

Work began in late spring, and the 23-year-old existing roof was torn off in sections. GAF Weather Watch Water & Ice Shield was applied as a leak barrier, followed by Proof Synthetic Underlayment from ABC Supply. “We couldn’t install the tiles until the inlaid gutter was in place, so we used a synthetic underlayment to keep everything watertight during the tear-off process,” says Pole.

Gutters were installed in an 8-inch-by-8-inch trough. “There was a course or two of the DaVinci, and then the inlaid gutters were set into the roof, and the roof starts again,” notes Pole. “The trough area was also layered with ice and water shield before the copper gutters were put in.”

Transitions and flashings were also made of copper. “Everything on this job was 20-ounce lead-coated copper,” notes Pole. “All of the valleys, transition flashing, and the gutters were all lead-coated copper.”

The DaVinci synthetic shake tiles were easy to install, according to Pole. “They are nailed in place,” he says. “You can use stainless steel nails or hot-dip galvanized nails. In this case, we used 1-1/2-inch stainless steel ring shank nails.”

The low-slope roofs were covered with a GAF two-ply modified bitumen system. Michael McCory, project manager, headed up the crews on the five low-slope sections, which totaled approximately 2,700 square feet. 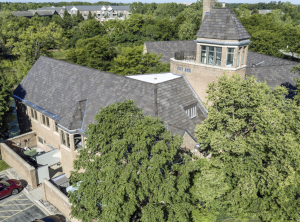 The observatory tower over the main entrance features a walk-out area with a modified bitumen roof system. Photos: DaVinci Roofscapes

The low-slope sections had different substrates. Two balconies had concrete decks, while two canopies and an area over the garage had wooden decks. Some of the flat roofs had paver systems, which had to be removed and replaced after the new system was installed.

Half-inch DensDeck Prime cover board from Georgia-Pacific was installed over the wood and concrete decks. The GAF mod bit system consisted of a Ruberoid 20 base sheet and Ruberoid Granular FR cap sheet in white. “It was applied in a cold-process adhesive,” says McCory. “No torches were used. A manufacturer’s inspection was part of the process for a 20-year warranty.”

The upper level of the tower features a small walk-out balcony. “That was probably the most difficult area,” notes McCory. “It was covered with pavers and difficult to reach. We had to remove the pavers and store them in the stairwell during the installation.”

Logistics at the jobsite posed a few problems. “The hardest part was the observatory tower by the front entry,” Pole recalls, noting an 80-foot man lift was used to remove the existing cedar and install the synthetic shake. “On the tower, it was all lift work. For other parts of the project, workers on both the steep-slope and the low-slope portions of the roof were tied off at all times.” 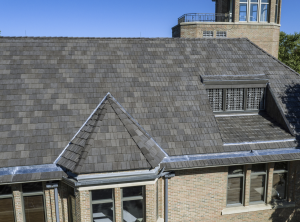 The building is bordered by mature trees and a large pond, limiting roof access. “On the west side of the structure, the pond comes right up against the building,” Pole says. “We had to use a lift that could stretch over that pond to get that end of the roof.”

An Equipter mechanized debris hauler was used to get around narrow grassy areas near the building. “We used an Equipter, which is like a gas-powered, mobile dumpster, to drive around the building and enter the courtyard for our debris,” Pole says. “We have two of those pieces of equipment, which we use on a lot of our jobs to get the shingles out. They don’t damage lawns and help protect the landscaping.”

The building was occupied during the installation, so care had to be taken to ensure business was not disrupted and passers-by would be safe. “The village offices were open for business while we were working, and the police station was open as well,” notes McCory. “The tower and front entryway had to be completed on the weekend, as that was the only walkway for the public to get in.”

The police station had several doors, so crews had to coordinate with officers while replacing the roof on that section and let them know where they were setting up the crane. The courtyard area was also restricted at times.

“We obviously had to keep everything neat and organized and make sure we cleaned up every day to make sure nothing would bother the people working in the building and the residents who came in to the village hall to get permits or whatever the case may be,” McCory says. “You don’t want police cars getting flat tires.”

Communication is the key to meeting customers’ needs, especially with an occupied building. “Whoever the building owner is, I give him my cell number and make sure I have his,” Pole notes. “I try to stay in contact with them and let them know if anything is changing. I ask them if they have any questions or issues, or if their schedule is changing. On this project, they said it was like we were never even there, and that’s what we like to hear.”

Feedback from the city has been positive, according to Pole. “They are very happy with it,” he says. “The system has the look they wanted. It looks like shake, they had a lot of colors to choose from, and they won’t have the maintenance issues that they did with the cedar. And it will last a lot longer. They will save a whole roof replacement phase in the life of the DaVinci product.”

Pole believes his company’s diverse portfolio gives it an edge. “We’re one of very few union companies that have their own shinglers, flat roofing crews, and sheet metal workers in house. We also do waterproofing, metal wall panels and insulation,” he says.

“This project shows our strength — we can do it all.”

GAF Begins Next Round of ‘Enter for an Experience’ Sweepstakes