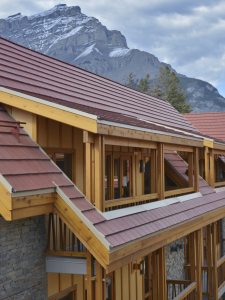 The Moose Hotel & Suites is located in Banff, Alberta, Canada. The resort sits at an elevation of 4,600 to 5,300 feet in the Canadian Rocky Mountains, about 80 miles west of Calgary.

Banff, Alberta, Canada, sits at an elevation of 4,600 to 5,300 feet in the Canadian Rocky Mountains, about 80 miles west of Calgary. The small community (around 8,000 permanent residents) was established as a resort town almost immediately after its hot springs were discovered by Canadian Pacific Railway workers in 1883. The town, which is built in a valley surrounded by mountains, has been a popular tourist destination for more than a century and is known for skiing and, of course, the Banff Upper Hot Springs.

Because of its history of tourism, Banff offers comfortable lodging at every price point. Among the town’s options for accommodations are nine hotels owned and operated by Banff Lodging Co.; the company also has seven restaurants, two spas, and a ski school and rental shop. The Moose Hotel & Suites is the lodging company’s newest four-star property, having opened in July 2016.

Because Banff is a national park, the Moose Hotel & Suites project is significant because it is one of the largest hotel developments (174 rooms) since the Canadian federal government’s 1998 commercial growth cap, which has prevented many hospitality developments from being built. Despite being approved, the Moose Hotel & Suites still was required to adhere to Banff’s design guidelines. The guidelines state they were enacted “to prevent any monstrosities being put there to destroy the general beauty of the park.”

In fact, the guidelines require that all developments, particularly hotels, enhance views to the mountains surrounding Banff. “They want visitors to realize they’re really in the mountains and not just anywhere in a hotel room,” explains Ted Darch, owner of Calgary-based E.J. Darch Architect Ltd., the architect on the Moose Hotel & Suites project. “We wanted to take advantage of the views, so designing the hotel to resemble a village with a courtyard in the middle allowed us to capture the drama of the mountains. You’ll see the reviews on TripAdvisor mention this.”

“We’ve done work with Banff Lodging for about 10 years on most all its other facilities,” explains Brock Hanson, president and CEO of Banff-based Rocky Mountain Sundeck & Roof. “This was a pinnacle Banff job that doesn’t occur often due to the building guidelines. Having this project in our backyard was just fantastic to be a part of.”

Constructed to Withstand the Elements

The new hotel had to meet Banff’s strict design guidelines. It also had to withstand the subarctic climate (winters as cold as -40 F and short and cool summers, as well as 15 to 40 inches of precipitation, typically snow, per year). The Moose Hotel & Suites features spray foam at R-20 in the walls and R-40 in the roof. The spray-foam insulation not only keeps guests and staff warm during Banff ’s long winters, but also protects the building against air and moisture infiltration. 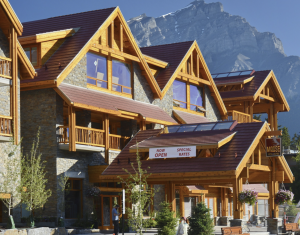 The Moose Hotel & Suites was required to adhere to Banff’s design guidelines, which were developed “to prevent any monstrosities being put there to destroy the general beauty of the park.”

Darch had specified concrete tile roofing on a Banff Lodging hotel previously, but Hanson recommended a new supplier with whom he had previously worked. Darch met with a salesperson from the roofing manufacturer to discuss its concrete tile product. After he checked some samples, Darch was convinced this was the right product for the project.

The distinctive concrete tile was chosen for its energy efficiency and durability. It resembles natural slate to complement the design of the rustic mountain lodge. Because it is concrete, the tile is able to withstand the subarctic region’s extreme weather and withstands flying embers in case of forest fires. “We learned a big lesson about fire recently in Fort McMurray, north of Edmonton, Alberta,” Darch notes. “They had a terrible fire last summer that destroyed something like 2,000 houses. They’re in the forest and Banff is in the forest, so fire resistance was important.”

The tiles’ aesthetic also appealed to Darch; he especially liked that he was able to choose a bright red (Mission Red) for the roof. “From the architectural perspective, what is really nice is the color possibilities and to make the roof color part of the overall scheme of things is great,” he says. “Other roofing options were nice but they didn’t have the snap that the red tile does.”