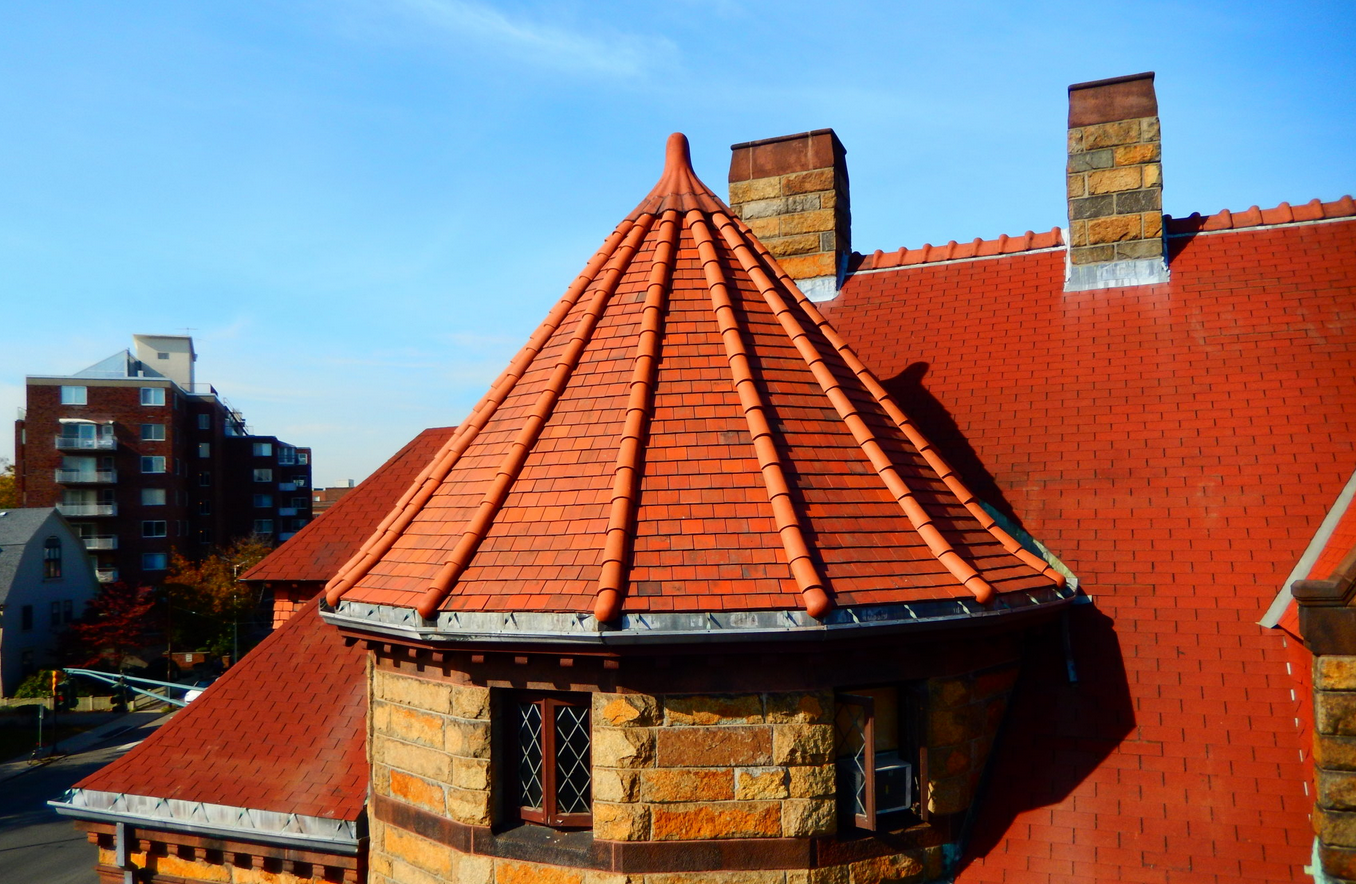 In my capacity as a historic preservation contractor and consultant, I am often afforded the opportunity to become involved in exciting and challenging projects. Recently, my firm was awarded the contract to restore the clay tile roof turrets at Boston’s Longy School of Music’s Zabriskie House. Now part of Bard College, Longy School’s Zabriskie House is actually the historic Edwin H. Abbot House with a sympathetically designed addition built in the 1980s. The deteriorated condition of the original house’s turrets, as well as lead-coated copper gutter linings and masonry dormers, had attracted the attention of the Cambridge Historic Commission, and a commitment to the proper restoration of these systems was struck between the commission, building owner and a private donor. 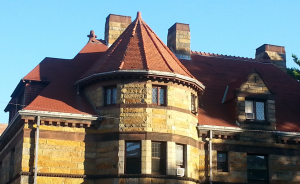 The hipped roof turret on the building’s primary façade was in need of serious attention.

Before I can specify historically appropriate treatments, I need to don my consultant’s cap and dig into the history of a building to best understand its evolution. Developing the background story will typically answer questions and fill in the blanks when examining traditional building systems. An 1890 newspaper clipping held by the Cambridge Historic Commission re- ports that “[t]he stately home of Mr. Abbot, with its walled-in grounds, on the site of the old Arsenal, promises to be the most costly private dwelling in the city.” An examination of records held by the Massachusetts Historical Commission and from the Library of Congress’ Historic American Buildings Survey reveals that the firm of Longfellow, Alden & Harlow designed the Richardsonian Romanesque portion of the building and that Norcross Brothers Contractors and Builders was the builder of record.

Alexander Wadsworth Longfellow Jr. (of Longfellow, Alden & Harlow) was the nephew of the famous poet Henry Wadsworth Longfellow and an important figure in U.S. architectural history. After graduating from Harvard University in 1876, he studied architecture at the Massachusetts Institute of Technology and the École des Beaux-Arts in Paris, after which he worked as a senior draftsman in Henry Hobson Richardson’s office. After Richardson’s death in 1886, Longfellow partnered with Frank Ellis Alden and Alfred Branch Harlow to found the firm of Longfellow, Alden & Harlow. With offices in Boston and Pittsburgh, the firm designed many important buildings, including the Carnegie Library in Pittsburgh and the City Hall in Cambridge.

Norcross Brothers Contractors and Builders was a prominent 19th century American construction company, especially noted for its work, mostly in stone, for the architectural firms of Henry Hobson Richardson and McKim, Mead & White. Much of the value of the Norcross Brothers to architectural firms derived from Orlando Norcross’ engineering skill. Although largely self- taught, he had developed the skills needed to solve the vast engineering problems brought to him by his clients. For example, the size of the dome at the Rhode Island Capitol was expanded very late in the design process, perhaps even after construction had begun, so that it would be larger than the one just completed by Cass Gilbert for the Minnesota Capitol. Norcross was able to execute the new design.

The Edwin Abbot House is an interesting interpretation of the Richardsonian Romanesque style. Whereas the great majority of such buildings feature rusticated, pink Milford granite in an ashlar pattern, trimmed with East Longmeadow brownstone, Longfellow created a unique spin for Mr. Abbot. Although the building is trimmed with brownstone, the field of the walls features coursed Weymouth granite of slightly varying heights. The motif of orange, brown and golden hues of the stone is continued in the brick wall surrounding the property. 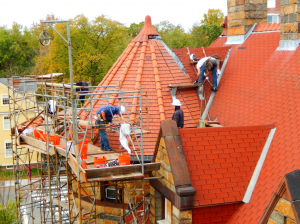 Scaffolding was erected that would make the otherwise dangerous, heavy nature of the work safe and manageable.

The roof is covered in a flat, square orange-red clay tile. Richardsonian Romanesque buildings are almost exclusively roofed in clay tile; Monson black slate; Granville, N.Y., red slate; or some combination thereof. It should be noted that because their need for stone was outpacing the supply, Norcross Brothers eventually acquired its own quarries in Connecticut, Georgia, Maine, Massachusetts and New York.

The roof framing system of steel and terra-cotta blocks is relatively rare but makes perfect sense when considered in context with the latest flooring technologies of the era. A network of steel beams was bolted together to form the rafters, hips and ridges of the frame. Across each is welded rows of double angle irons (or inverted T beams). Within these channels, in beds of Portland cement, the terra-cotta block was laid. The tile was then fastened directly to the blocks with steel nails. Because of the ferrous nature of the fasteners, the normal passage of moisture vapor caused the nails to rust and expand slightly, anchoring them securely in place. Whether this element of the design was intentional or simply fortunate happenstance, the result made for a long-lasting roof.

What doesn’t last forever in traditional slate and clay tile roofing systems is the sheet-metal flashing assemblies. Over the years, there must have been numerous failures, which led to the decision to remove the clay tiles from the broad fields of the roof and replace them with red asphalt shingles in the 1980s. Confronted with the dilemma of securing the shingles to the terra-cotta substrate, a decision was made to sheathe the roof with plywood. Holes were punched through the blocks and toggles used to fasten the plywood to the roof. In an area where the asphalt shingles were removed, more than 50 percent of the plywood exhibited varying degrees of rot caused by the normal passage of vapor from the interior spaces.

Fortunately, the turrets had survived the renovations from 30 years before. A conical turret in the rear and an eight-sided hip-roofed turret on the north side needed only repairs which, while extensive, did not require addressing issues with the substrate. The 16-sided turret on the primary façade of the building was in poor condition. Over the years, prior “repairs” included the use of non-matching tiles, red roofing cement, tar, caulk and even red slate. A scaffold was erected to allow safe, unfettered access to the entire turret and the process of removing the tile began. Care was taken to conserve as many tiles as possible for use in repairing the previously described turrets. 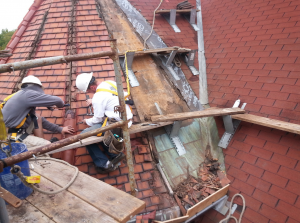 As the clay-tile roof covering was removed, the materials of the substrate were revealed and conditions were assessed.

The substrate was examined closely and, save for thousands of tiny craters created by the original nails, found to be sound. A new system had to be devised that could be attached to the terra-cotta blocks and allow for the replacement tiles to be securely fastened, as well as resist the damaging forces of escaping moisture vapor. Cement board, comprised of 90 percent Portland cement and ground sand, was fastened to the blocks with ceramic-coated masonry screws. The entire turret was then covered with a self-adhering membrane. The replacement tiles were carefully matched and sourced from a salvage deal- er in Illinois and secured with stain- less-steel fasteners. The flat tiles, no longer manufactured new, are referred to as “Cambridge” tiles for their prevalence on the roofs of great homes and institutional buildings in and around Cambridge.

Although I typically advocate for the retainage of all historic fabric when preserving and restoring traditional building systems, there are exceptions. In the case of the Abbot House roof, we encountered “modern” technologies that pointed us toward contemporary means and methods. Rusting steel nails in the terra-cotta block were brilliant for initial installation but seemed ill conceived for a second-go-round. Instead, using non-ferrous fasteners and a new substrate that is impervious to moisture infiltration will guarantee the turret’s new service life for the next 125 years or more.

Ward Hamilton has provided historic-preservation consulting and contracting services for more than 100 buildings in Boston, New York and throughout the New England states through his company Olde Mohawk Historic Preservation, Melrose, Mass.

Composite Slate Tops Mansard Roof at The Chateau at Nemacolin