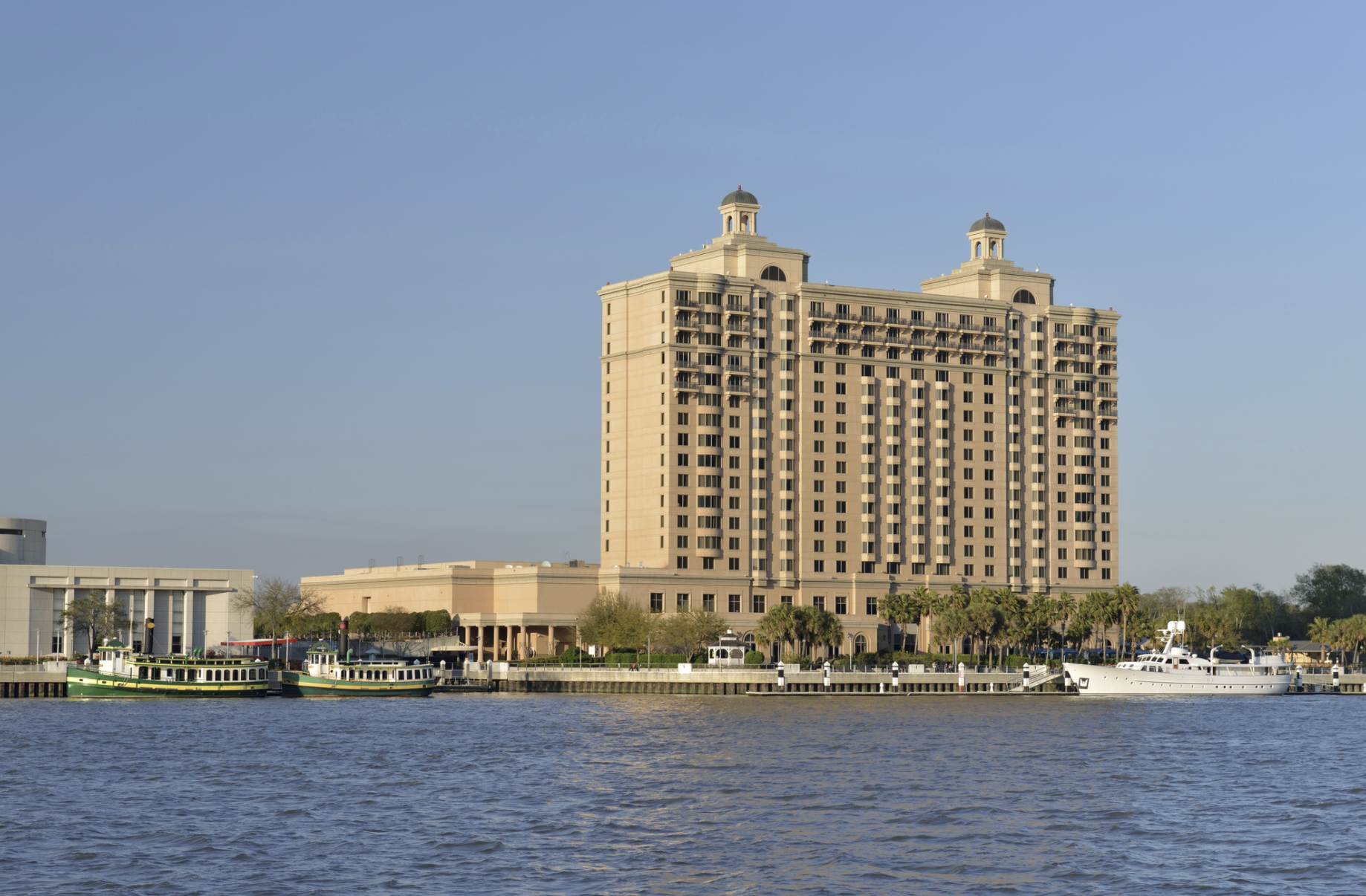 Were you to visit Savannah, Georgia, the Westin Savannah Harbor Golf Resort and Spa would be tough to miss. This landmark property, known for its 18-hole PGA golf course, secluded beach access and on-site spa, is the tallest building in the city at 16 stories. The aura of luxury surrounding the building was threatened, however, when Hurricane Matthew moved through the region, inundating the city with rainwater and causing the aging Westin Savannah roof to fail. With leaks resulting in the closure of a major portion of the hotel’s upper floor, it was clear the building owners would need to move quickly to restore a waterproof seal atop their building.

The job would not be easy. The Westin Savannah is surrounded by the Savannah River on one side, a canal on another and the Savannah Convention Center on a third. The only feasible area left to stage and load the roofing material onto a crane was the front parking loop and valet area — an area that would typically be avoided with any other roofing project. “We only had one spot where we could set up, and that was the biggest challenge,” says Larry Hoffman, the superintendent who oversaw the installation of the roof at the Westin Savannah on behalf of Whitco Roofing, the Westin’s chosen contractor. “We were very limited with regard to any mobility around that hotel, not to mention the fact that we had to get materials onto a roof that was 270 feet from the ground.”

The Whitco Roofing team also had to deal with challenging application conditions, given that the roof had many penetrations due to the presence of air conditioning units, towers, exhaust vents, lighting, walkways, ladders, staircases and other equipment. Special care would have to be given to the installation of the flashing to ensure no opportunities for leak formation remained after the roofing job was done. Recognizing that the use of a liquid flashing material was the best bet to keep the roofing layer monolithic despite all the penetrations, the Whitco Roofing team set about selecting the right compatible materials for the job.

“SOPREMA’s SENTINEL P150 60-mil PVC-based roofing membrane was selected for the projectbecause we wanted a durable roofing product that was compatible with a liquid flashing material for difficult base flashings encountered during this project,” explains Henri Brickey, director of business development for Whitco Roofing. “We recommended the SOPREMA PVC membrane for several reasons, the first of which is the superior chemical and UV resistance PVC offers over TPO. Since we also intended to wrap the large quantity of concrete and metal support column bases with SOPREMA’s ALSAN RS 230 Flash polymethyl methacrylate (PMMA) liquid resin, we made sure the PVC membrane was compatible and that we could include those areas under the roof’s warranty.”

The complex coordination required for a successful roofing installation began on the ground. One week’s worth of material was staged at a time, then a crane was brought in to upload materials to the roof on the same day trash was being downloaded from the old roof tear-off process. All debris had to be carefully bagged and secured with tarps to avoid pollution in the nearby Savannah River, and the delivery and removal of four dumpsters at a time had to be carefully coordinated so that no dumpster was left on the premises overnight, blocking entry to the building. “You had to be out of there by five o’clock with everything, and it had to be done in a particular sequence, further complicating matters,” explains Hoffman.

On the rooftop, existing asphalt-based roofing materials were stripped down to the concrete deck. SOPREMA SOPRA-ISO3.5-inch polyisocyanurate insulation was adhered using SOPREMA DUOTACK 365 foam adhesive to provide improved R-value to the building. Next, the PVC membrane was bonded onto the insulation, providing both a reliable waterproofing layer and a reflective white finish that would help diminish heat absorption compared to the older materials. The liquid resin coating was then applied to prevent water intrusion at all exposed concrete column bases — extending up and coating metal base plates — and at vertical flashing points where air handling units tied into the building’s walls. New tapered crickets were also installed between drains, improving the overall flow of water on the roof and reducing the opportunity for ponding water.

Throughout the project, OSHA guidelines had to be followed carefully on the rooftop and on the ground to ensure both workers and bystanders entering and exiting the hotel were safe. Flagging and ground guides were used around the staging area, and strict adherence to timelines for deliveries and mobilizations were also critical to the safe execution of the project. The Whitco Roofing team worked closely with the hotel management throughout the process to prevent interference with hotel operations and to minimize risks to guests.

The building now benefits from a superior roofing membrane that is Energy Star-compliant, upgraded insulation, a strong foam adhesive that helps resist uplift pressure during storms and a monolithic waterproofing layer thanks to the liquid flashing installed around all penetrations. “SOPREMA’s single-ply membranes have a reputation for strength and durability,” notes Brickey, “and especially with the inclusion of the liquid flashing system to deal with difficult flashing details, we were able to provide a long-lasting, warranted waterproofing solution for the Westin.”

In all, more than 14,000 square feet of roofing material was replaced over the course of roughly a month by a large team of installers. In part because the hotel staff was so pleased with the way the job was planned, managed and executed, Whitco Roofing was brought back to install a new roof on a lower section of the building as well. That project was recently completed, positioning the Westin Savannah to resist the elements while serving as a relaxing getaway for the foreseeable future.