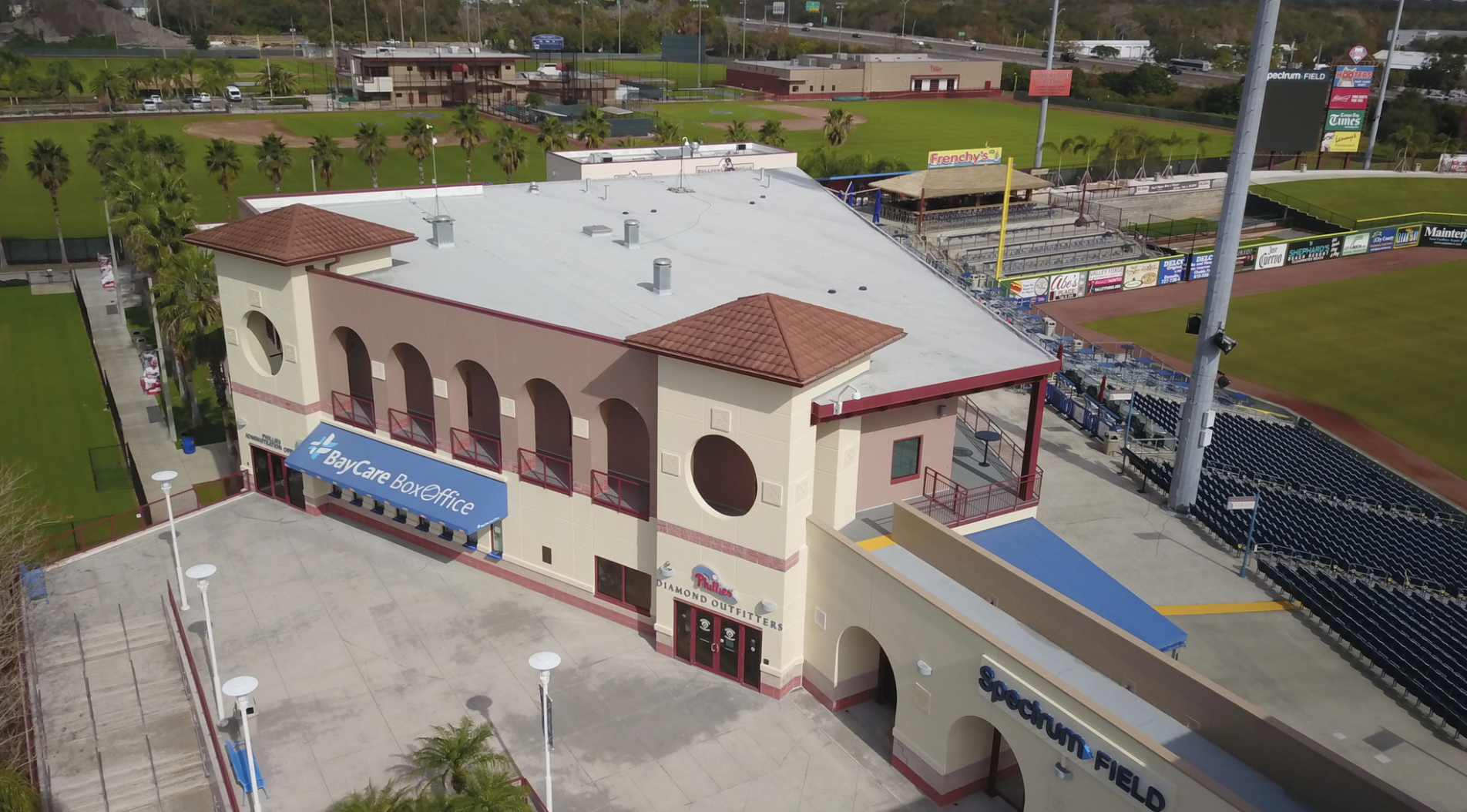 TarHeel Corporation was founded as TarHeel Roofing in 1981. Headquartered in St. Petersburg, Florida, the company specializes in commercial work including roofing, waterproofing, cladding, damp proofing, exterior renovations, lightning protection and sheet metal. According to John Looney, president and owner of TarHeel Corporation, the company’s name was changed to better reflect its ability to work on the entire building envelope, including above- and below-grade waterproofing.

When nearby Spectrum Field needed roofing and waterproofing work, Looney saw the project as a perfect opportunity to show off the company’s versatility. The stadium is home to the Philadelphia Phillies during spring training, and it also serves as the home field for the team’s minor league affiliate, the Clearwater Threshers. “We’ve done a lot of sports complexes in the past,” notes Looney.

TarHeel Roofing restored the roof two years ago, and this year the company waterproofed the walls. The scopes of work included cold-applied roofing, waterproofing, caulking, and glazing, as well as repairing the tie-ins to pedestrian deck areas. “There were a lot of little pieces here that were right in our wheelhouse,” Looney says.

When the stadium’s existing modified bitumen roof reached the end of its service life, the decision was made to restore it with Garland’s Energizer K Plus FR. “We used Garland’s Energizer system, a cold-applied system with polyester mesh and granule surfacing on it,” Looney notes.

Some perimeter areas of the roof were removed and repaired after an infrared scan was used to detect any moisture, and then the entire roof surface was cleaned and primed. The fluid-applied system is installed in two coats with a polyester or fiberglass scrim sheet fully adhered into it. Immediately after the second coat, granules are broadcast over the entire surface. “The finished product is very good-looking,” says Looney.

Work on the vertical surfaces began in September 2018. The complex features walls clad in an exterior insulation and finish system (EIFS), as well as concrete and concrete masonry unit (CMU) walls. “The EIFS, concrete, and CMU walls each required a different application, but the basic scope of work is the same for each, with some variations,” Looney says.

The walls were first cleaned and repaired. After the walls were pressure washed, crews repaired and replaced caulking at windows, doors and other penetrations. Cracks were filled using Garland’s Green-Lock Sealant XL, a polyether joint sealant with no VOCs. “We took care of cracks in the concrete and any breaks, including damage from baseballs hitting it,” Looney says. “Once the surface was repaired, we moved on the coating application.”

Crews applied Garland’s Tuff-Coat acrylic architectural wall coating. The coating can be applied with either a sprayer or rollers. Both methods were used on the project, but the majority of the work was done with rollers. The tan color was a crucial concern for the owners, and up-front testing ensured the tint would match up perfectly on the various substrates. “There was also some striping involved for aesthetics,” notes Looney. “We put on a band of a darker accent color.”

The schedule was sometimes adjusted to accommodate concerts and other events. “The most unusual thing is the actual use of the building, obviously, being a baseball park with a lot of public access,” he says. “It takes a beating from all of the use and people there.”

Accessing some of the wall areas on the site was the biggest challenge on the project, according to Looney. “If you can picture the typical ballfield, you’ve got anything from ground-level vertical walls up to walls tucked behind seating up in the grandstand,” he explains. “Logistically, the challenge was getting access to all of the areas, extending from public concourses all the way up to the owner’s boxes and suites. A lot of that work was done from ground level, actually out on the field, reaching up with big Hi-Los that extended over two or three sections of seating.”

When figuring out the best approach, safety is always the primary concern. “Safety is a big part of any project, beginning with preparation and layout,” Looney says. “Once we were awarded the job, we weighed working from ladders, swing stages, and man lifts. In this project, we opted to do most of it from man lifts because of the safety concerns inherent in working from ladders, swing stages, or even scaffolding in some of these areas.”

Major-league workmanship is the key to earning repeat business, says Looney. “We don’t do much advertising,” he says. “To us, that means every job has to be done well enough to be asked back. We pay a lot of attention to the details, including safety and the setup. To us, the finished product has to be great — that’s a given — but also the journey, from the start to the completion, is important as well. We do a lot of work on hospitals, health care areas, and industrial sites where us being in the way really isn’t an option. We are very familiar with working around the needs of businesses. So from a logistics and detail point of view, we are very sensitive to making sure the ride is as good as it can be.”