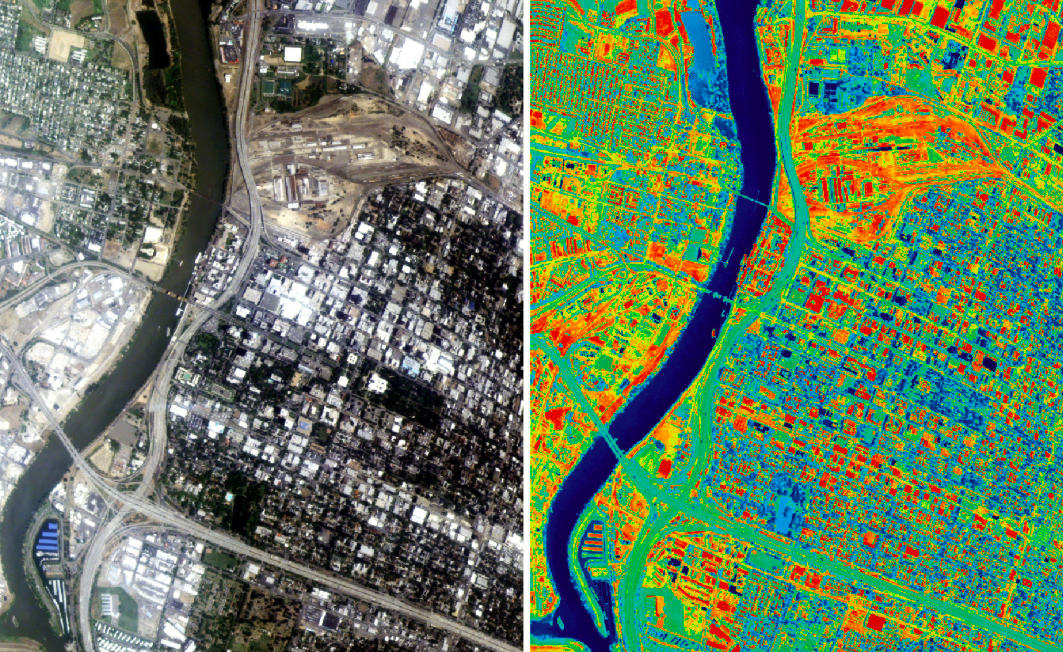 An infrared scan of Sacramento, Calif., shows the range of surface temperatures in the area. Source: Lawrence Berkeley National Laboratories. 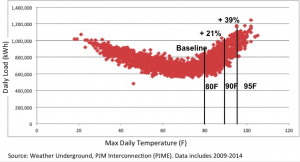 The energy savings from cool, reflective, roofs have long made them the go-to roof choice in warmer and temperate climates here in the United States. Both ASHRAE and the International Energy Conservation Code have included roof surface reflectivity requirements for a number of years. About half of all new flat roofs installed in the country are highly reflective and in some product categories white options outsell dark ones by a substantial margin. It is hard to argue with the notion that, where it is warm, the roofs should be white. While the building-level impacts of cool roofs in cool climates has been covered in the past, very little has been written about the broader economic benefits of cooler buildings and cities. When we include the economic impacts of factors like improved health, air quality, and energy savings, the case for cool roofs in cool climates looks even better.

The Benefits of Cool Roofs Go Way Beyond the Building

The building-level impacts of cool roofs are a central part of the discussion about whether they should be used in cold climates. However, it is also important to recognize the substantial co-benefits that come from installing cool roofs in terms of healthier and more comfortable people, improved productivity, better air quality, and increased economic prosperity. While the economic benefits of cool roofs are substantial, they may not always be fully included in a building owner’s roof buying decision.

How much cooler could our cities become if we added more reflective roofs? In a comprehensive review on this topic, Santamouris 2012 found that when a global increase of the city’s albedo is considered, the expected mean decrease of the average ambient temperature is close to 0.5°F (0.3°C) per 0.1 increase in reflectivity, while the corresponding average decrease of the peak ambient temperature is close to 1.6°F (0.9°C). The cooling impact of reflective roofs in certain neighborhoods could be significantly better, though. A study of Chicago by Notre Dame University found that installing reflective roofs cooled city surfaces by around 3.5 to 5.5°F (2-3°C), but surfaces in the downtown core cooled by 12.5 to 14.5°F (7-8°C).

We have started to better understand and quantify the impact in cities that are able to get a degree or two of cooling. The most obvious benefit is that cooler cities demand less energy on hot days. The graph in Figure 1 plots electricity demand in 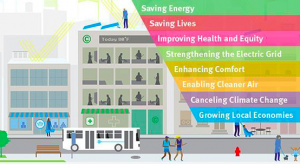 Washington, D.C., against the maximum temperature every day for 5 years (2010–2015). The graph’s shape looks very similar to plots from other cities with high penetrations of air conditioning units. Demand for electricity climbs rapidly above about 80°F. When the maximum temperature is 90°F, the city requires 21 percent more electricity, on average, than on 80°F days. At 95°F, demand has spiked by nearly 40 percent over the 80°F baseline. Charges for peak electricity demand are a major expense for commercial and industrial building operators and, in seventeen states, for homeowners as well. Further, peaking demand is often met by less efficient, more expensive, and dirtier power plants that worsen air quality. At worst, peak demand can cause productivity-killing service interruptions or brownouts.

Heat is a potent but silent killer. On average, heat kills more people than any other natural disaster, and heat-related deaths tend to be underreported. In 2015, Scientific American reported that 9 out of the 10 deadliest heat events in history have occurred since 2000 and have led to nearly 130,000 deaths. Cities on dangerously hot days experience 7 percent to 14 percent spikes in mortality from all causes.

Heat stress and stroke are only the tip of the pyramid of heat health impacts. Heat puts significant additional stress on people already suffering from diseases of the heart, lungs, kidneys, and/or diabetes. A recent study finds that every 1.5°F increase in temperatures will kill 5.4 more people per 100,000 people every year.

Installing cool roofs or vegetation can lead to a meaningful reduction in heat deaths by making the daytime weather conditions more tolerable. There are a number of studies estimating the impact of increasing urban reflectivity and vegetative cover on weather conditions. Kalkstein 2012 and Vanos 2013 looked at past heat waves in 4 U.S. cities and modeled the impact of increasing reflectivity by 0.1 (the estimated equivalent of switching about 25 percent of roofs from dark to light colors) and vegetative cover by 10 percent. Though the sample sizes are too small to draw sweeping conclusions, the studies found that cities making these modest changes could shift weather into less dangerous conditions and reduce mortality by 6 percent to 7 percent.

The health, air quality, and energy benefits of modest increases in urban roof reflectivity could generate billions of dollars of 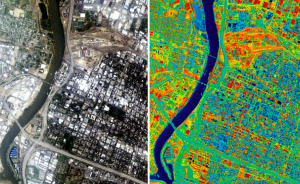 economic prosperity for our cities. A study of 1,700 cities published in the Journal Nature Climate Change found that changing only 20 percent of a city’s roofs and half of its pavement to cool options could save up to 12 times what they cost to install and maintain, and reduce air temperatures by about 1.5°F (0.8°C). For the average city, such an outcome would generate over a $1 billion in net economic benefits. Best of all, adding cool roofs to between 20 and 30 percent of urban buildings is a very realistic target if existing urban heat island mitigation policy best practices are adopted.

As positive as cool roofs are for cities in cool climates, they first have to be a high-performing choice for the building itself. What do we know about net energy savings in cool climates with higher heating load? This question was the subject of “There is Evidence Cool Roofs Provide Benefits to Buildings in Climate Zones 4-8” in the November/December 2016 issue of Roofing that summarized the newest science and field studies that show that reflective roofs provide net energy benefits and favorable heat flux impacts on roofs in cold climates. In short, the newest research from Columbia, Princeton and others demonstrates that the size of the “winter heating penalty” is significantly less than many had thought and shows net reductions in annual energy use when cool roofs are used, even with roof insulation levels as high as R48.

It is not just the science that supports the use of reflective roofs in cold climates. The strong and steady growth of cool roofing in northern markets over the last decade or two is also a good indication that reflective roofs are a high-performance option in those areas. For almost 20 years, Target Corporation has installed reflective PVC membranes on nearly all of its stores in the 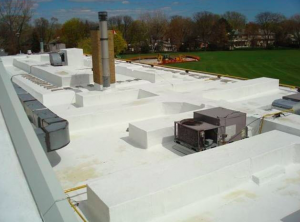 Studies estimate that modest increases in urban roof reflectivity could generate billions of dollars of economic prosperity for cities. Pictured here is the roof on the Cricket Club in Toronto. Photo: Steve Pataki

United States and Canada. The membranes are usually installed over a steel deck with no vapor retarder. Target and manufacturer Sika Corporation undertook a field study of 26 roofs on randomly chosen stores located in ASHRAE Climate Zones 4-6 including Connecticut, Illinois, Massachusetts, Michigan, Minnesota, New York, Washington, and Wisconsin. The roofs were 10-14 years old at the time of the survey. None of the 51 total roof sample cuts were made across these roofs showed signs of condensation damage. A more detailed accounting of the study by representatives of Target Corporation and Sika Sarnafil published in Building Enclosure includes this important paragraph from authors Michael Fenner, Michael DiPietro and Stanley Graveline:

“Specific operational and other costs are confidential information and cannot be disclosed. However, it can be stated unequivocally that although the magnitude varies, Target has experienced net energy savings from the use of cool roofs in all but the most extreme climates. Although the savings in northern states are clearly less than those achieved in southern locations, experience over approximately two decades has validated the ongoing use of cool roofs across the entire real estate portfolio. Even in climates with lengthy heating seasons, overall cooling costs exceed heating costs in Target’s facilities.”

It is increasingly clear that installing cool roofs is the definition of “doing well by doing good.” Even in cold areas, a properly built roof system with a reflective surface is a high-performance option that delivers value for building owners while making hugely positive contributions to the neighborhoods and cities they occupy.