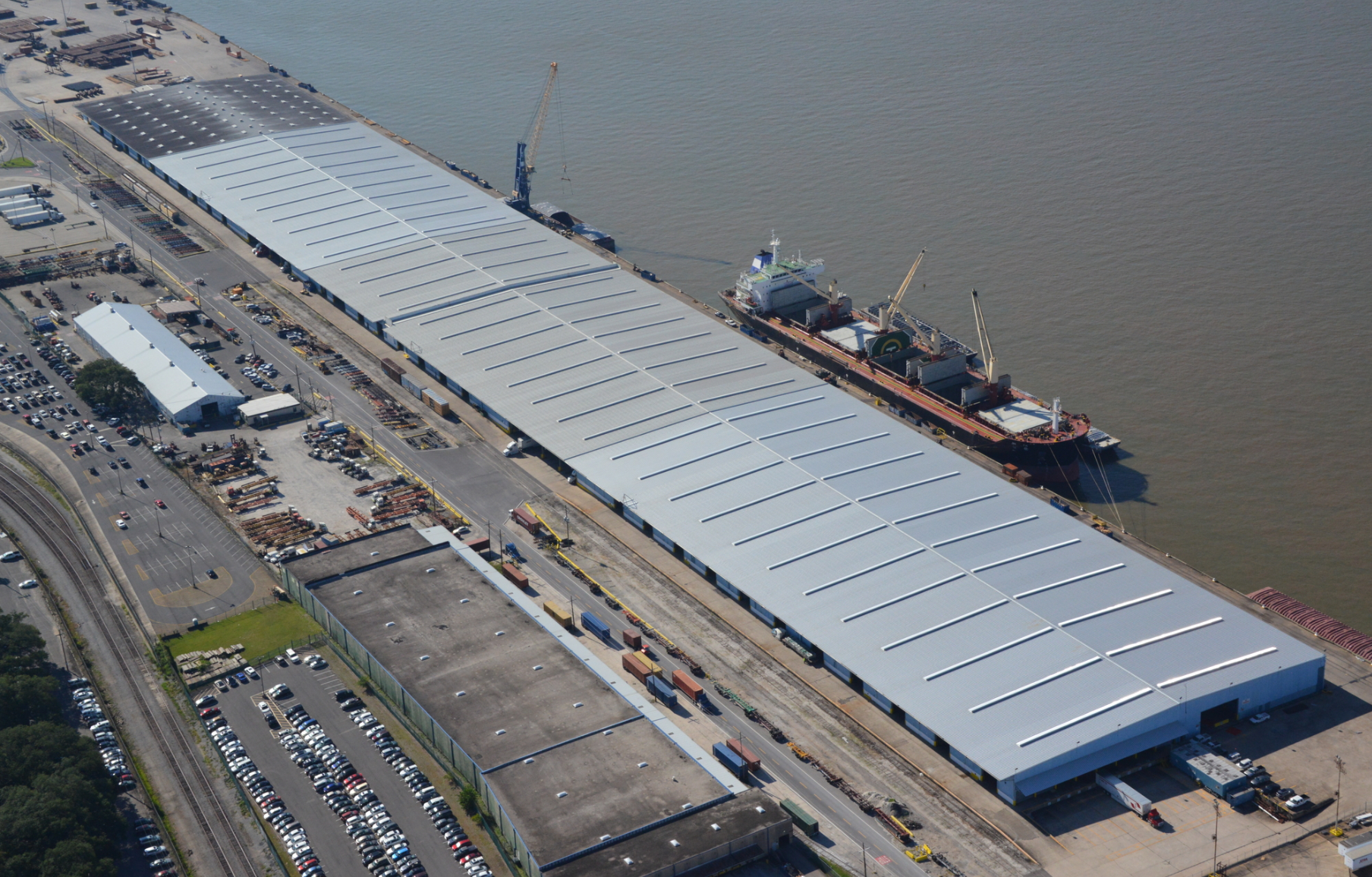 Owned by the Port of New Orleans, the Nashville Ave. Terminal Complex offers more than a million square feet of cargo space. When the structure's original built-up roof reached the end of its service life, a standing seam metal roof was manufactured and installed by Ray Bros. Inc. on the vast majority of the building. Photo: Aero Photo. 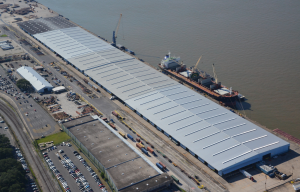 Owned by the Port of New Orleans, the Nashville Ave. Terminal Complex offers more than a million square feet of cargo space. When the structure’s original built-up roof reached the end of its service life, a standing seam metal roof was manufactured and installed by Ray Bros. Inc. on the vast majority of the building. Photo: Aero Photo.

Construction projects on active jobsites can mean coordinating a lot of moving parts. Projects don’t get much more complicated than the recent roof replacement at the Nashville Ave. Terminal Complex, owned by the Port of New Orleans. The scope of work was multifaceted, the schedule was daunting, and everyone entering the facility had to have the proper security credentials. All of the work was performed next to the Mississippi River on top of an active wharf building, with cargo coming in and going out on trucks and forklifts as ships were loaded and unloaded. Materials housed inside the building were sensitive to moisture, dust and debris — and often had to be moved as work progressed.

Gino Ray Sr., president of Ray Bros. Inc., the roofing contractor on the project, likened it to a giant, three-dimensional puzzle. “It was almost like a Rubik’s Cube,” he says. “They had to move a section of material, and then when we finished a section, they slid the material over there so we could move on the next one. The whole time, the port was in operation. There was a lot of dancing involved.”

The Nashville Ave. Terminal Complex, operated by Ports America Louisiana Inc., offers more than 1 million square feet of storage space. Built in the 1960s, the structure was a rigid-frame, iron building with a ballasted tar and gravel roof over a heavy tongue-and-groove wooden deck. Decades of problems had seriously deteriorated the wooden deck, as well as the four-by-four wood nailers that were bolted to the rafters and purlins. 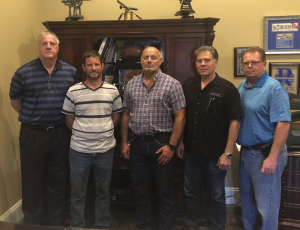 The structure’s failing roof was replaced in three phases. During Phase 1, undertaken about a decade ago, a new built-up roof system was installed on one end of the building. When that section experienced performance issues, the owners looked for other options. Ray Bros. had the answer: an architectural metal roof.

Ray Bros. has been in business in New Orleans since 1996, when it was founded by Gino Ray Sr. The company has always focused primarily on metal roofing, and in the late ’90s it began roll forming and manufacturing its own panels and systems. “Today we manufacture everything we install,” Ray notes. “We’re kind of a hybrid — a manufacturer/contractor.”

The company’s metal panel system had been installed on several other port buildings, and the owners specified it for Phase 2 of the project, which covered a 230,000-square-foot section near the center of the building on either side of the firewall. Phase 2 was completed in 2014. Phase 3 encompassed 420,000 square feet to complete the sections on either side of Phase 2. Work began in August of 2016 and completed in May of 2017.

Ray Bros. manufactured and installed all of the metal roofing on the building — a total of 650,000 square feet — and served as both the prime contractor and the roofing contractor on the third phase of the project. Ray credits his dedicated team, the cooperation of all of the companies involved, and an innovative strategy for coping with the project’s many hurdles as the keys to a successful outcome.

Beefing Up the Structure

The standing seam metal roof system recommended by Ray Bros. was specified for its durability and low maintenance. The new system would give the port the long lifespan the owners desired, but it would necessitate some structural changes.

“Before we put the metal roof on, we had to beef up the existing trusses and reinforce the existing structure because it was such a light building now,” Ray notes. “There was an enormous amount of welding to the exiting trusses and existing purlins that had to be done before we could begin to put the roof on.” 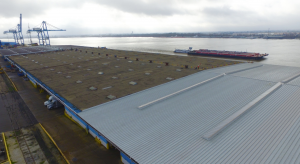 Metal panels were roll formed directly onto the roof for installation. The panels on one side of the roof were 180 feet long. Photo: Ray Bros. Inc.

The plan was to beef up the structure from the inside and install the new gutters. Then the old roof could then be torn off and the new metal roof installed. The roof installation would be completed in sections, with crews moving from one area to the next in sequence.

Gulf Coast Service Group served as the structural steel and demolition contractor. Crews on man lifts set up inside the building reinforced the existing steel structure. New angle irons were welded to the bottom of the purlins. The existing sprinkler system had to be reconfigured, as it was attached to the four-by-four wood nailers that had to be removed. Work on the sprinklers was performed in conjunction with S & S Sprinkler Company. “We didn’t have to dismantle the sprinkler system, just move it,” Ray explains. “New hangers were mounted to the steel. We had to put a hanger on, take a hanger off. That was part of the tango dance as well.”

After the welders completed their work, crews from RK Hydrovac vacuumed the ballast off the roof. Prior to the demolition work, approximately 4,100 linear feet of gutters were installed. Oversized gutters were manufactured from 16-gauge stainless steel in the Ray Bros. metal shop, and all of the joints were welded together. Gutter sections were raised into place with a lift and secured with stainless steel brackets and hangers. “That gutter weighed about 11 pounds per running foot, and we made it in 21-foot lengths,” Ray notes.

The demolition crews and installation crews then swung into action. After sections of the deck were removed, metal panels were roll-formed on the site and installed. “The demo people would tear out a bay — which is a 20-foot section — all the way up to the ridge,” Ray explains. “On one side of the roof, the panels were 180 feet long. So, they would tear out a 20-foot-by-180-foot section, and we would come in right after that and put a 20-foot section of 180-foot panels down.” 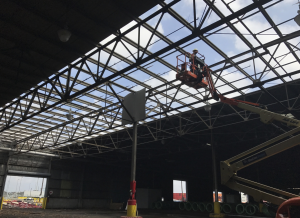 Panels were made from 22-gauge galvalume. Zimmerman Metals supplied roll forming machines to Ray Bros. Inc. so the company could manufacture its proprietary product. The RBI MT-240 panels were 18 inches wide and interlock using continuous clips. A batten cap was installed over the top and then mechanically seamed using a machine manufactured by D.I. Roof Seamers.

Every third bay had a skylight system to light the interior. Skylights used on the project were manufactured by CPI Daylighting Systems and installed by Glendale Industries. Custom-made curbs and crickets were fashioned by Ray Bros.

When skylights could not be installed right away, the openings were covered with plywood and felt to eliminate safety hazards and keep the interior of the building dry. “When the Glendale Industries people would show up, we’d remove the plywood and they would put on their system,” Ray notes. “As the job progressed, we’d re-use the same plywood and temporary coverings as we went along. We’d just leapfrog the plywood from curb to curb.”

After the roof was completed, the last step was to replace the wall panels in the interior that were designed to trap the smoke in the event of a fire. The old corrugated smoke panels were wired to the steel, but that system would not comply with today’s standards, so Ray Bros. created a sub-framing system to attach new ones. “We had 500 squares of smoke panels to install beneath the roof system,” Ray states. “We put in some16-gauge furring channels and attached the panels with screws. We manufactured all of that in house.” 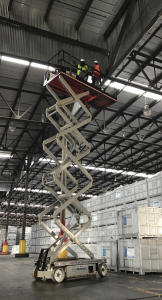 The demo crews, installation crews, and skylight crews kept moving in sequence under the direction of Jobsite Superintendent Robert Sinopoli, a 30-year industry veteran who has been with Ray Bros. ever since the company was founded. Sinopoli monitored everyone’s progress on the site and made sure everyone knew their assignments each day. “Everybody leapfrogged everybody else,” Ray notes. “Everyone had their own song and dance, and if one person got out of rhythm, it would domino back.”

Everyone involved on the project also needed to have a dance card, as security on the site was tight. Workers needed to have a background check and Transportation Worker Identification Credential (TWIC). Every vehicle had to have proper registration, insurance and inspection tags. The jobsite did not allow personal vehicles, and this posed a problem for Ray Bros., as the company routinely had 40 to 50 workers on site. “Everybody had to be on a company vehicle in a seat with a seat belt,” Ray notes. “I had to buy a used bus to transport workers in and out. We painted it, put our logo on it and made it look pretty. We just drove it 1.5 miles a day. At the end of the job, I sold the bus.”

The project was wrapped up ahead of schedule, and it was the sequencing of work that was the key its success, according to Ray. “We didn’t want to tackle this project one bay at a time; we were looking at big chunks at a time,” he says. “We were able to develop a rhythm quicker that way. Instead of changing hats several times in the course of a day or a week, we put a hat on, let it stay on, got a big section done and moved on to the next. We didn’t want to change tools and change personnel. We wanted to look at it like a monolithic application.”

In the end, it all boiled down to pride — no one wanted to be the one to falter. “We self-perform a lot of our work, and we have existing relationships with all of the subcontractors we use,” Ray says. “I’m never going to let them down or leave them hanging, and I know they are going to do the same for me. That’s what made that job go — no one wanted to be the weak link. Everybody had a job to do and they did it. It worked out great.”

It was a true team effort. “This was like our Super Bowl, and we won,” Ray concludes. “I’m real proud of my company, our people, and all the people we worked with. I know that on our next job, I can count on them and they know they can count on me.”