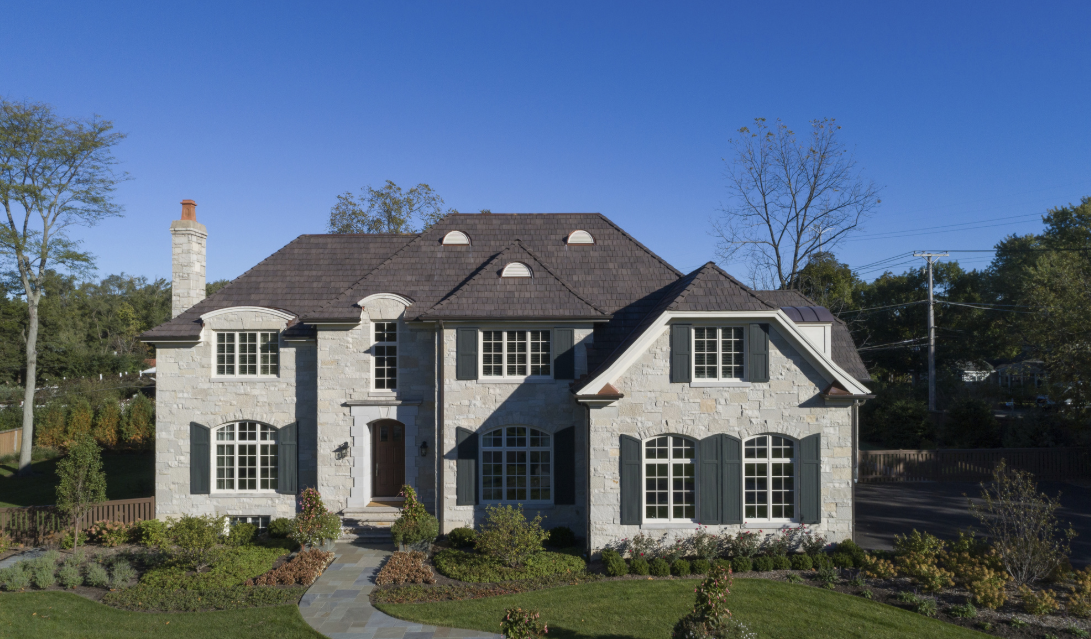 What makes a re-roofing project truly stand out? According to Chad Janisch, owner and President of Shake Guys, it’s the ability to aesthetically and functionally blend copper accents with synthetic shake to create a one-of-a-kind roof. The home they re-roofed last year in Northfield, Illinois, perfectly illustrates his point.

“The Mayberry home project had numerous custom copper dormers that had to be tied in with the DaVinci Roofscapes system,” says Janisch. “Most re-roof projects in this market that have this much custom copper work choose to reuse the existing copper metals. However, for this project the owners approved the use of new copper.

Prior to hiring Shake Guys, homeowner Trent Mayberry knew his real cedar shake roof was in poor condition. Hail, wind damage and severe weather had taken its toll on the roof. When he inspected the roof, Chris Paulus, a field representative for Shake Guys, found that the cedar shakes were in the beginning stages of cupping and curling. Even worse, numerous cedar shakes were starting to fail and slide off the roof. Due to the amount of damage and overall poor condition of the roof, it was determined that a replacement roof was needed.

“Shake Guys helped me from the initial roof assessment to coordinating all aspects of the estimates,” says Mayberry. “They worked with the insurance company to get a replacement roof approved, provided references so I could see their other projects, then did a professional installation job and great follow-up. This was a responsive, knowledgeable and caring team that I would highly recommend. Overall they provided great ‘end-to-end’ service.”

Pleased with his selection of a roofing team for his home, Mayberry next had to make a decision on a roofing material. He wanted an alternative cedar shake that enhanced the curb appeal of his home. At the same time his top desire was to find a roofing product that would not deteriorate over time and put him in a similar situation for replacement.

Janisch points to some key benefits for homeowners. “The synthetic shake tiles are Class A fire and Class 4 impact rated, they withstand high winds and severe weather, plus they resist insects, algae and decay,” he notes. “With the Lifetime Limited Warranty on the DaVinci product and low maintenance appeal, you can’t beat the return on investment.”

Shake Guys, whose primary focus is to replace real cedar roofs with an alternative composite roofing system, worked with Mayberry to select the Tahoe color for the Bellaforté Shake shingles. The new color and refreshed roof has added substantially to the curb appeal of the home.

“This roofing project took about 10 days to complete due to the custom copper work, but it was well worth it,” says Janisch. “The house looks stunning. I believe this will serve as a showpiece house to other residents in the area who are considering a new roof.”

“The investment that the Mayberry family made in this new synthetic shake roof gives them instant added curb appeal and value for their home,” he concludes. “Over time, this low-maintenance roof will also save them money and headaches. They’ll no longer have to invest in preserving real cedar tiles and maintaining them.”