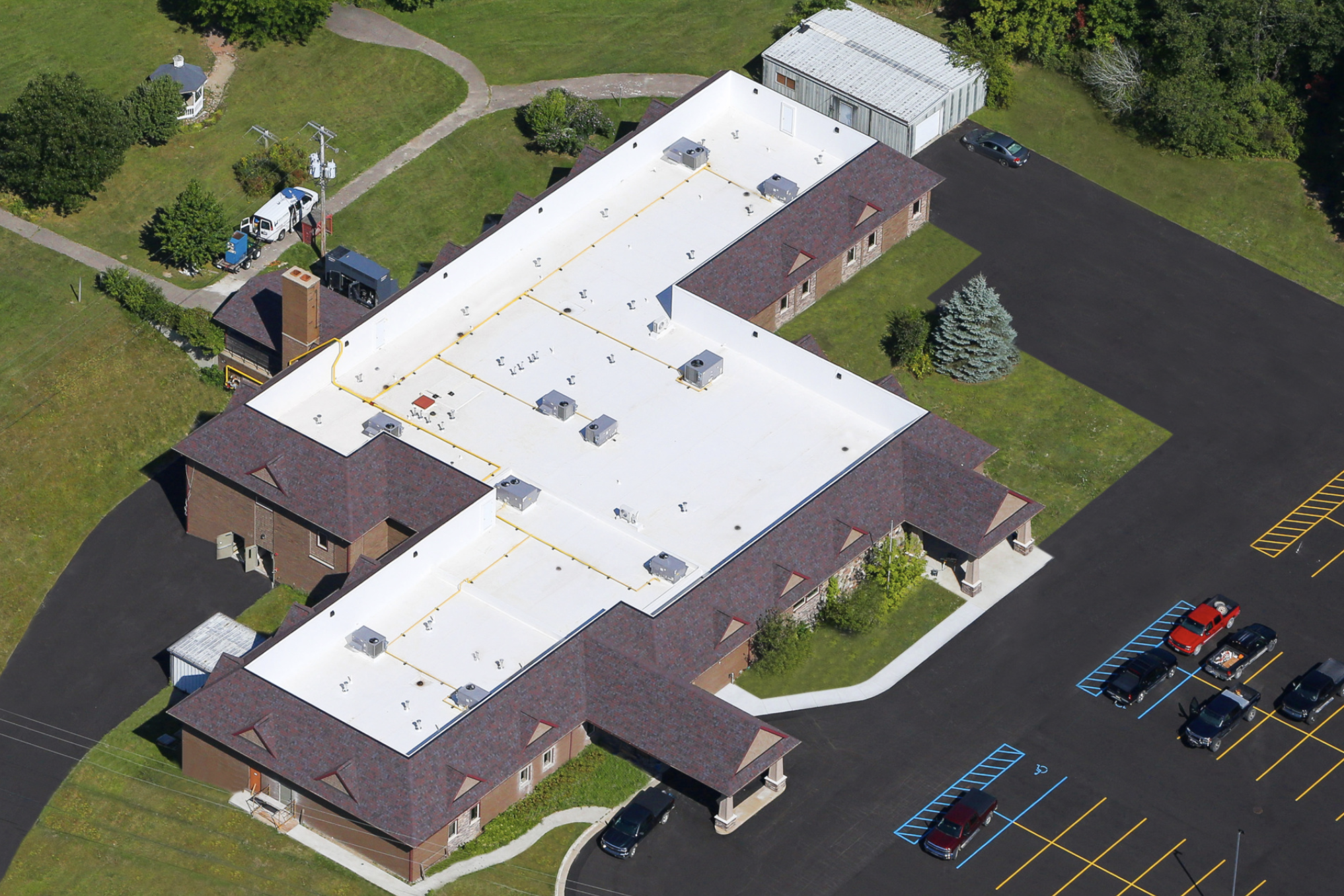 Flatrock Manor owner and chief executive officer Nicholas Burnett saw tremendous potential in the shuttered building. It was the right size. It was designed for providing health care, serving first as a hospital and later as a hospice. It was situated on 10 acres of scenic property complete with a nature trail, a gazebo and a pond that is home to swans, geese, ducks and painted turtles. Its exterior included beautiful Mid-century modern details.

Burnett had long been seeking an opportunity in Goodrich, Michigan, to open a new location for Flatrock Manor, a group of foster care centers in Mid-Michigan for adults with special developmental and behavioral needs. The empty building would fit the bill. But first, it would need some TLC and a more homelike atmosphere.

The new facility opened in December 2019 and is now home to 30 residents.

The building is a fixture in Goodrich, a 1,900-resident suburb of Flint. Built in the early 1960s, the facility was originally a 53-bed, full-service hospital. In 1997 it became a hospice. That facility closed in 2013 and the building remained vacant until Flatrock Manor purchased it.

The exterior of the original 18,000-square-foot building embraced the Mid-century modern style popular in the era. Subsequent additions that brought the facility to 23,000 square feet followed suit for a cohesive look.

The existing roofing system was quintessential Mid-century modern. The built-up roof was surrounded by a slim, 1-foot-high parapet wall with an aluminum cap. A gabled front canopy shielded patients and visitors from the elements while arriving at or leaving the hospital.

While the exterior’s design perfectly suited a hospital, it was too institutional for a facility that would be its residents’ long-term home.

Happily, the task of adapting the building for its new purpose fell to Sedgewick + Ferweda Architects, the same firm that designed the original hospital nearly 60 years earlier. The team embraced the challenge of striking the right balance between preserving architecturally significant features and meeting regulatory guidelines governing the design of long-term care communities.

“Initially we tried to glorify the Mid-century style of the building,” says Michael Murphy, project manager with Sedgewick + Ferweda Architects. “We completed several elevation studies to incorporate some modern ways of dealing with the parapet. Ultimately, we had to go back to the drawing board to achieve a more residential look.”

“We played with the value of scale when incorporating the mansard roof with the horizontal façade of the building,” Murphy says. “We made it more substantial, so it doesn’t look like a short little mansard roof that has been pushed onto the building.”

Owens Corning TrueDefinition Duration Designer shingles in Merlot were chosen for the mansard roof and gables, bringing added warmth to the façade. They were complemented by fascia and soffits from Quality Aluminum Products in Cranberry. Cultured stone in a sandy shade was added on the gable walls and around the windows to accent the original terra cotta-toned brick walls.

A Roof to Perform for the Long Haul

The building’s existing roofing system — ballasted EPDM on top of a built-up roof with fiberglass insulation — was leaking and the EPDM membrane was “in horrible shape,” according to Tim McKnight, president of Tri-County Roofing. “We found nothing but saturated insulation,” he adds. “The only reason that more water hadn’t gotten into the building’s interior was because the asphalt on the BUR roofing system kept it out.”

Both the EPDM and BUR systems would need to be torn off.

The steel 22-gauge B deck remained in good condition and original plans called for it to be retained, but requirements for the new HVAC system and ductwork meant that it, too, needed to be removed and replaced. Mother Nature chose to not make the process easy. Facing a month of frequent rain, the Tri-County Roofing crew worked as quickly as possible and did their best to keep the building’s interior dry; for example, tearing off the existing roof bit by bit around the edges to make space for the carpenters to frame in the new mansard roof before beginning work on the rest of the roof.

In selecting the new roofing system, longevity and hassle-free performance were the top considerations.

“The client wanted something that would last 20 years with no issues,” McKnight says, noting that such performance would require withstanding the broad spectrum of Mid-Michigan’s weather, which ranges from warm, sunny summers to cold, snowy winters.

The client’s original preference was to install a new EPDM system, but McKnight recommended a mechanically fastened TPO system for its durability, easy maintenance and cost effectiveness. A system featuring a white, 60-mil membrane from Mule-Hide Products Co. was specified.

A new 22-gauge steel B deck was installed. It was dead level to accommodate the building’s plumbing system, which made getting the insulation right essential. Tapered expanded polystyrene (EPS) insulation is designed specifically for such applications, making it the ideal choice for this project.

The building’s existing drainage system — in which water flows from the roof to storm drains in the basement — did not change in the renovations. The Tapered Solutions team at ABC Supply Co. worked from drawings to design a take-off that would provide positive drainage. Even the best drawings are not 100 percent reflective of the reality on the roof, however, so the Tri-County Roofing installation crew inevitably encountered instances where the insulation was slightly off-center from the sump or the real-life walls were not quite where they were shown on the plans. In those cases, the crew fabricated pieces of EPS or polyiso insulation on the jobsite to achieve the proper drainage.

The TPO membrane was mechanically attached for a fast, cost-effective installation. “We were able to achieve the 20-year warranty the client wanted without the added labor and materials costs of a fully adhered system,” McKnight explains.

New roof hatches also were installed, providing safer, easier access to the roof — both during the reroofing project and for ongoing maintenance of the roof and rooftop equipment.

For the teams at both Tri-County Roofing and Sedgewick + Ferweda Architects, the most rewarding part of the project was learning about the residents who will live at Flatrock Manor and helping provide them with a comfortable home.

“It was cool to learn about what Flatrock Manor does for people with special needs and see how they’re helping families and meeting needs that you forget are out there,” McKnight says.

Owens Corning Introduces “Bourbon” as 2022 Shingle Color of the Year