Reroofing the 10.3-acre surface of Chicago’s highly sensitive James W. Jardine Water Filtration Plant posed logistical challenges on par with the building’s magnitude. Phasing to ensure the plant continued to supply fresh water to its 5 million customers in the city of Chicago and its suburbs, the need for complete containment areas, roof-load restrictions, unique stainless-steel expansion joints and the Department of Homeland Security’s onsite presence all made for intricate operations. But John Cronin, president of Chicago-based Trinity Roofing Service, says Mother Nature was his toughest challenge. 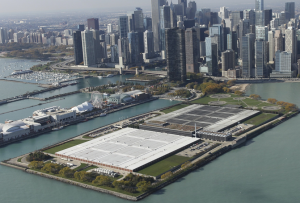 The James W. Jardine Water
Filtration Plant arguably was the largest and most complex roofing project in Chicago during the past
decade.

“Conducting construction on the Lake Michigan waterfront during Chicago’s harshest winter in 30 years [2013-14] was by far the hardest part of this job. Driving rain, wind, black ice and snow—it was unmerciful,” asserts Cronin. “Constant communication had to be our priority, because we could go to the site in the morning and discover that weather made impossible the sequence of work we had planned. Senior Project Manager J.J. Matthews, Job Superintendent Rob Reno and I had to be incredibly flexible to keep the job moving.”

The water-treatment plant’s 50-year-old coal-tar roof and concrete roof deck had been leaking, which created potential health concerns. The plant supplies approximately 1 billion gallons of clean water a day, which meant many concrete filter beds had to remain operational and free of contamination during construction. Filter beds beneath the phased work area were drained. To protect the drained beds, Trinity cut a hole in the roof and erected a specialized watertight “shoe box” work zone, extending 6-feet down. These shoebox areas consisted of a plywood scaffolding platform blanketed by a 60-mil membrane. Inside the box, existing structural steel had to be sand blasted free of lead paint, inspected and replaced in some spots. At any given time, the team had two 56,000-square-foot scaffolding platforms in place.

Winter winds blew snow across the flat roof and down into these protection zones carrying multiple forms of contamination. Rooftop bird droppings were one source. Asbestos from the original 1960s roof was another. The team had to bring in heat torpedoes (portable forced-air or convection heaters) to melt the snow and divert it through custom-made gutters into cisterns to be hauled offsite so workers could access the steel.

Protecting materials from the elements was also paramount. More than 1,000 rolls of fleece-backed membrane had to remain completely dry. In addition, cellular glass roof insulation (specified from Belgium for its proven 50-year track record on the facility) had an eight-week timeframe for production and overseas delivery, making critical that each square of insulation stayed in pristine condition. Chicago rain can fall in isolated pockets, so every load had to be fully secured with tarp, even on seemingly sunny days. 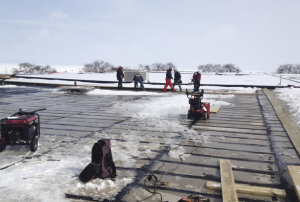 The harsh Chicago winter of 2013-14 didn’t stop Trinity Roofing Service from completing the two-year project on schedule. Seven miles of backer rod are being laid
between seams of concrete roof channels despite snow and ice.

“It was an ongoing job to impress the importance of covering all the materials that came to the site, especially at the slightest hint of rain,” Cronin says. “It worked, though. We fully inspected every material load that came to the job site. Out of more than 712,000 board feet of new insulation, none of it was rejected thanks to our strictly enforced quality-control program.”

Despite the snow and ice accumulation on staging areas, no salt was allowed on the property for fear of water contamination, which meant Trinity also dealt with slippery walking and driving surfaces.