The millions of passengers who pass through Denver International Airport each year no doubt have the usual list of things to review as they prepare for a flight: Checked baggage or carry-on? Buy some extra reading material or hope that the Wi-Fi on the plane is working? Grab
a quick bite before takeoff or take your chances with airline snacks? 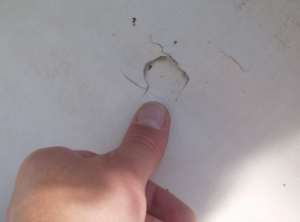 The storm created concentric cracks at the point of hail impacts and, in most cases, the cracks ran completely through the original membrane.

Nick Lovato, a Denver-based roofing consultant, most likely runs through a similar checklist before each flight. But there’s one other important thing he does every time he walks through DIA. As he crosses the passenger bridge that connects the Jeppeson Terminal to Gate A, he always looks out at the terminal’s roof and notices with some pride that it is holding up well. Fifteen years ago, after a hailstorm shredded the original roof on Denver’s terminal building, his firm, CyberCon, Centennial, Colo., was brought in as part of the design team to assess the damage, assist in developing the specifications and oversee the installation of a new roof that would stand up to Denver’s sometimes unforgiving climate.

DIA, which opened in 1995, is located 23 miles northeast of the metropolitan Denver area, on the high mountain desert prairie of Colorado. Its location showcases its spectacular design incorporating peaked tent-like elements on its roof, meant to evoke the nearby Rocky Mountains or Native American dwellings or both. Unfortunately, this location also places the airport smack in the middle of what is known as “Hail Alley”, the area east of the Rockies centered in Colorado, Nebraska and Wyoming. According to the Silver Spring, Md.- based National Weather Service, this area experiences an average of nine “hail days” a year. The reason this area gets so much hail is that the freezing point—the area of the atmosphere at 32 F or less—in the high plains is much closer to the ground. In other words, the hail doesn’t have time to thaw and melt before it hits the ground.

Not only are hail storms in this area relatively frequent, they also produce the largest hail in North America. The Rocky Mountain Insurance Information Association, Greenwood Village, Colo., says the area experiences three to four hailstorms a year categorized as “catastrophic”, causing at least $25 million in damage. Crops, commercial buildings, housing, automobiles and even livestock are at risk.

Statistically, more hail falls in June in Colorado than during any other month, and the storm that damaged DIA’s roof followed this pattern. In June 2001, the hailstorm swept over the airport. The storm was classified as “moderate” but still caused extensive damage to the flat roofs over Jeppesen Terminal and the passenger bridge. (It’s important to note that the storm did not damage the renowned tent roofs.) The airport’s original roof, non-reinforced PVC single-ply membrane, was “shredded” by the storm and needed extensive repair. Lovato and his team at CyberCon assessed the damage and recommended changes in the roofing materials that would stand up to Colorado’s climate. Lovato also oversaw the short-term emergency re- pairs to the roof and the installation of the new roof. 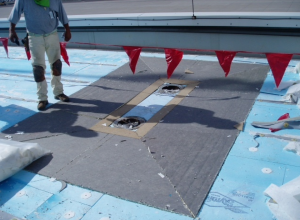 The initial examination of the roof also revealed that the existing polystyrene rigid insulation, ranging in thickness from 4 to 14 inches, was salvageable, representing significant savings.

Under any circumstances, this would have been a challenging task. The fact that the work was being done at one of the busiest airports in the world made the challenge even more complex. The airport was the site of round-the-clock operations with ongoing public activity, meaning that noise and odor issues needed to be addressed. Hundreds of airplanes would be landing and taking off while the work was ongoing. And three months after the storm damaged the roof in Denver, terrorists attacked the World Trade Center, making security concerns paramount.

Lovato’s inspection of the hail damage revealed the extent of the problems with the airport roof. The original PVC membrane, installed in 1991, was showing signs of degradation and premature plasticizer loss prior to being pummeled by the June 2001 storm. The storm itself created concentric cracks at the point of hail impacts and, in most cases, the cracks ran completely through the membrane. In some instances, new cracks developed in the membranes that were not initially visible following the storm. The visible cracks were repaired immediately with EPDM primer and EPDM flashing tape until more extensive repairs could begin. Lovato notes that while nature caused the damage to DIA, nature was on the roofing team’s side when the repairs were being made: The reroofing project was performed during a drought, the driest in 50 years, minimizing worries about leaks into the terminal below and giving the construction teams almost endless sunny days to finish their job.

The initial examination of the roof also revealed that the existing polystyrene rigid insulation, ranging in thickness from 4 to 14 inches, was salvageable, representing significant savings. Although a single-ply, ballasted roof was considered and would have been an excellent choice in other locations, it was ruled out at the airport given that the original structure was not designed for the additional weight and substantial remediation at the roof edge perimeter possibly would have been required.

Lovato chose 90-mil black EPDM membrane for the new roof. “It’s the perfect roof for that facility. We wanted a roof that’s going to perform. EPDM survives the best out here, given our hailstorms,” he says. A single layer of 5/8-inch glass-faced gypsum board with a primed surface was installed over the existing polystyrene rigid insulation (secured with mechanical fasteners and metal plates) to provide a dense, hail-resistant substrate for the new membrane. 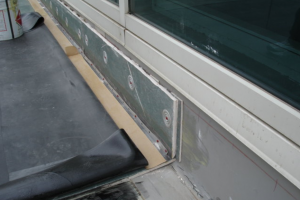 In some areas adjacent to the airport’s clerestory windows, the membrane received much more solar radiation than other areas of the roof.

In some areas adjacent to the airport’s clerestory windows, the membrane received much more solar radiation than other areas of the roof. When ambient temperatures exceeded 100 F, some melting of the polystyrene rigid insulation occurred. “That section of the roof was getting double reflection,” Lovato points out. To reduce the impact of this reflection, the roof was covered with a high-albedo white coating, which prevented any further damage to the top layer of the polystyrene rigid insulation board and also met the aesthetic requirements of the building.

Lovato’s observations about the durability of EPDM are backed up by field experience and controlled scientific testing. In 2005, the EPDM Roofing Association, Washington, D.C., commissioned a study of the impact of hail on various roofing membranes. The study, conducted by Jim D. Koontz & Associates Inc., Hobbs, N.M., showed EPDM outperforms all other available membranes in terms of hail resistance. As would be expected, 90-mil membrane offers the highest resistance against punctures. But even thinner 45-mil membranes were affected only when impacted by a 3-inch diameter ice ball at 133.2 feet per second, more than 90 mph—extreme conditions that would rarely be experienced even in the harshest climates.

Lovato travels frequently, meaning he can informally inspect the DIA roof at regular intervals as he walks through the airport. He’s confident the EPDM roof is holding up well against the Denver weather extremes, and he’s optimistic about the future. With justified pride, Lovato says, “I would expect that roof to last 30-plus years.”