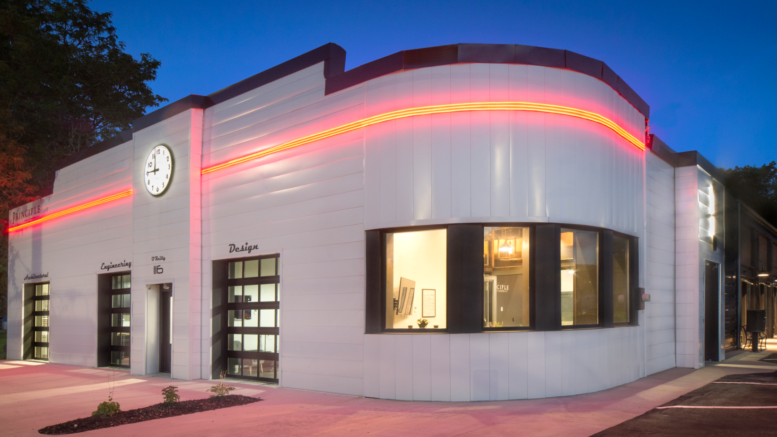 A vision and some metal panels combined to revitalize a car dealership from a bygone era into office and retail space, piquing the curiosity of passersby in Norwich, New York.

Brothers Mike and Dan O’Reilly, owners of Principle Design Engineering PLLC, of Norwich, New York, were searching for new office space, and they weren’t afraid to take on a major overhaul. A vacant factory building at East Main and Midland Avenue in Norwich checked all the boxes.

“We were looking for a building for our offices,” says Mike O’Reilly, PE, managing partner. “This building was originally built as a car dealership back in the 1940s. For the last 20 years, it was used as a factory and it had lost all its charm.”

O’Reilly says when the car dealership closed, the new owners converted the building into a manufacturing facility and renovated the exterior, removing the overhead doors and windows and replacing them with block. The membrane roof fed into gutters that were four feet deep and wide. “They were a nightmare,” notes O’Reilly.

When the design was complete, the brothers got their hands dirty, executing the renovation, serving as their own contractors, including installing the ABC metal roofing and the metal wall panels from sister company MBCI.

ABC’s 29-gauge Perma-Clad metal roofing panels in Coal Black (6,500 square feet) were installed first on the backside of the bowed roof. The roofing panels installed on the front overlapped the backside panels by about 6 feet, to hide the lap from street view. The large gutters were over-framed to accommodate the 36-inch-wide exposed fastener panels, with a rib height of 5/8 of an inch. The ABC plant in Rome, New York, also used Coal Black coil to press brake caps for the parapet walls.

“We briefly considered another membrane roof, but decided to go with metal,” O’Reilly says. “We talked about a standing seam roof, but didn’t think it would work as well over the bowed roof. The Perma-Clad panel easily curved over the ridge.”

“We chose to readapt and reimagine what this building could be for our office,” Mike O’Reilly says. “Holding true to its roots — and for our automotive passion — from East Main, it looks like a 1950s dealership, with a modern twist. From the Midland Drive side, it looks like a building possibly built in 2021. It invokes thoughts of history, feelings of interest and change and passion for a renewed future.”

The Designer panels were adorned with neon lighting, reminiscent of car dealerships from another era.

“I’m a car guy, so this was the perfect building for us,” Mike O’Reilly says. “We use a lot of metal and metal was the obvious choice because it was cost-effective and it gave us the modern aesthetic we were looking for. Our business has increased since we moved into this building. People, strangers, are always stopping in to ask questions. It’s a great home for our business.”