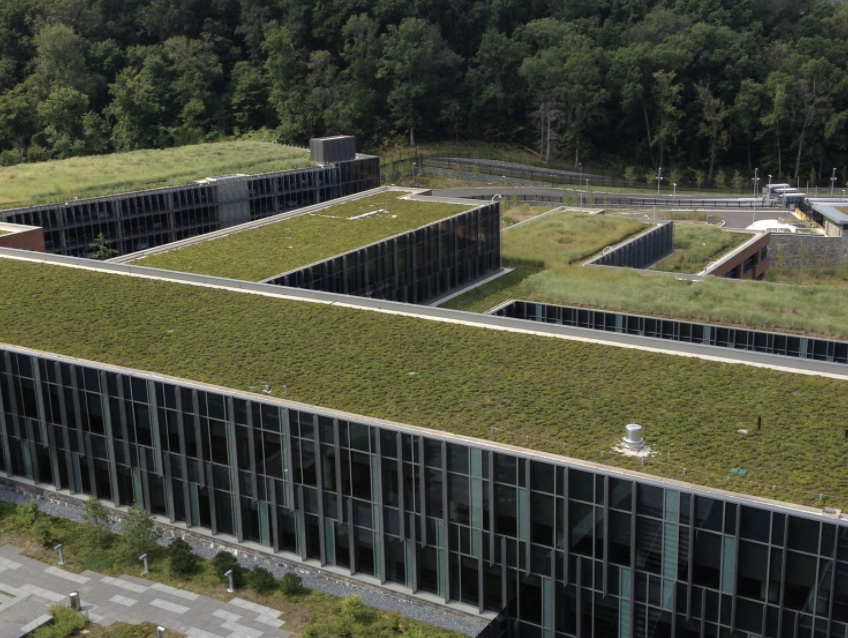 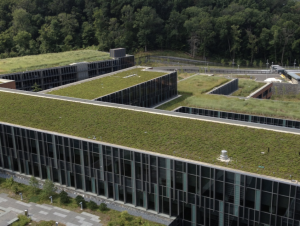 Like a 550,000-square-foot sponge, the vegetative roof assembly (VRA) atop the Douglas A. Munro Coast Guard Headquarters Building in Washington, D.C., absorbs rainfall while managing its release into the city’s sewer system. Green roofs are a storm water management “best practice” in the nation’s capital, which boasts more than 3.2 million square feet of green roof space.

Beyond complying with local and federal storm water mandates, the project team creating the vegetative roof sought to create a rooftop habitat that supports biodiversity and helps birds and other wildlife thrive. The result of a careful and collaborative approach to moisture management is a high-performing roof that ultimately received LEED Gold certification from the U.S. Green Building Council. Working as a system, the roof’s components help reduce rainwater runoff while helping to reduce pollutant loads and protect natural resources such as the nearby Chesapeake Bay.

As every roofer knows, no two projects are alike. The location of the Douglas A. Munro Coast Guard Headquarters on hilly terrain provided plenty of natural obstacles, including nine of the eleven levels being built into a hillside. The site 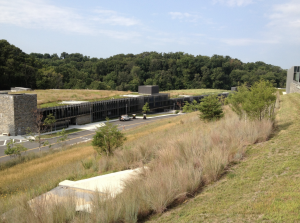 features a series of stair-stepped green roof terraces that help gradually move water from higher to lower levels and eventually into a pond through elevation changes of 120 feet. According to Steve Gordon, president of Preservation & Protection Systems Inc. (PPSI), the company providing design and installation support with the Owens Corning FOAMULAR extruded polystyrene insulation and Henry 790-11 Hot Rubberized Asphalt used in the VRA, the stair-step design required a complex approach to the roof’s varied elevations. To meet this challenge a complex network of expansion joints by EMSEAL tied together multiple air barriers within the system. Another challenge was the magnitude of the project, spanning more than a half-million feet across multiple levels and 176 acres. Timing was critical, as plants and vegetation required quick delivery and transplanting into their new environment, particularly during D.C.’s sweltering summers. These living materials couldn’t simply be covered with a tarp until better conditions prevailed, but had to be quickly transported, installed and irrigated.

The Douglas A. Munro Coast Guard Headquarters serves 4,000 occupants, so comfort and energy efficiency were important concerns. From the outset of the project, the integrated roofing team was tasked with designing a vegetative roof assembly that would help decrease the building’s heating and cooling energy usage, lower long-term maintenance costs and extend the life of the roof.

A Solution to Achieve Performance Goals

The project team selected a Protected Roof Membrane Assembly (PRMA) to deliver the water management required to meet storm water mandates, as well as deliver energy efficiency through R-value performance and strength to support vegetation requirements. The PRMA places the insulation layer above the waterproofing membrane, a reversal of traditional roof systems. PPSI recommended Owens Corning FOAMULAR 404 and 604 extruded polystyrene (XPS) insulations for use in the PRMA. The water resistance and compressive strength of the XPS insulation provided the integrity needed for long-term roof performance and helped the Douglas A. Munro Coast Guard Headquarters Building ultimately achieve LEED Gold certification. 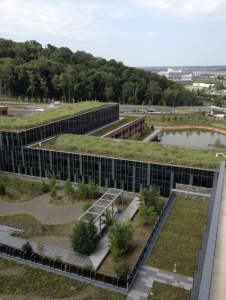 The Douglas A. Munro Coast Guard Headquarters was built on hilly terrain, and nine of the eleven levels were built into a hillside. The stair-stepped green roof terraces help gradually move water from higher to lower levels and eventually into a pond. Photos: Owens Corning

Given the sheer size of the project, it was inevitable that the roofing team would encounter several scenarios requiring strategic problem-solving throughout the installation. For example, the team adjustedthe engineered soil specification to reduce the loads within the structural tolerances for the roof structure and carefully addressed a range of pH, moisture, organic matter and nutrient levels to support the variety of plants. Not only did such careful attention deliver strength performance, it’s also achieved the objective of attracting wildlife. The terraced landscape has welcomed not only birds and butterflies, but the occasional deer wandering onto a rooftop.

Since its completion, the VRA at the Douglas A. Munro Coast Guard Headquarters has attracted widespread attention from landscaping groups, engineering firms and organizations interested in sustainability. These groups are interested not just in the building’s unique design but in its resilience and performance. Steve Gordon of PPSI says the resilience of the headquarters’ roof is reflected in its record of no leaks. “We’ve had no leaks,” Gordon says. “The reason we use hot fluid applied waterproofing on green roofs is because we want to avoid any leaks in the building. At the end of the day, the biggest liability in a roof is water.”

After successfully navigating a range of challenges and opportunities, the U.S. Coast Guard Headquarters’ VRA epitomizes the convergence of aesthetics and performance and is recognizedas one of the largest green roofs in the world.According to the Landscape Performance Foundation, the headquarters’ vegetative roof retains up to 424,000 gallons of rainwater.

In a small way, the performance reflects the integrity of a hero an Act of Congress honored when naming the headquarters, according to Captain Will Smith, Commanding Officer U.S. Coast Guard Base NCR. Captain Smith noted, “The Coast Guard’s only Medal of Honor recipient, Douglas Munro earned the award for his selfless sacrifice as a landing craft pilot at Guadalcanal while evacuating marines from a beachhead under heavy fire from enemy forces.”

Be the first to comment on "Douglas A. Munro Coast Guard Headquarters Boasts One of World’s Largest Green Roofs"