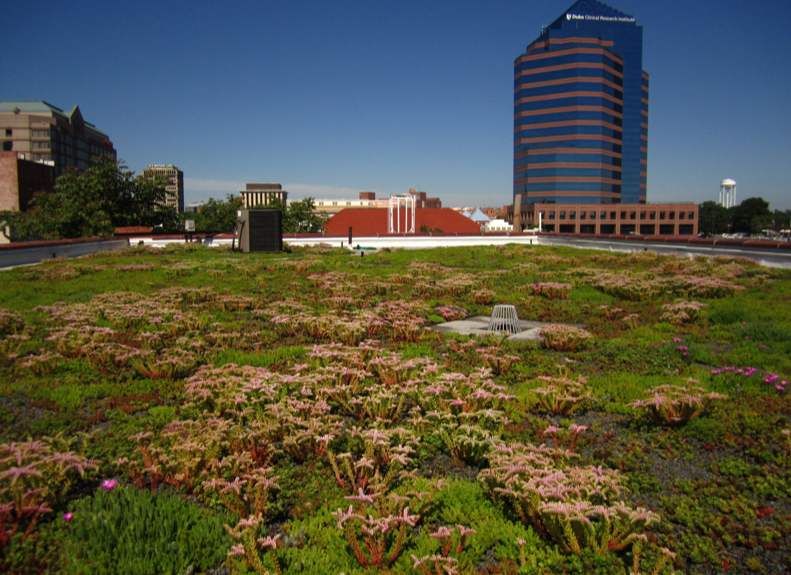 Founded in 2002, Xero Flor America (XFA) is the official U.S. distributor of the Xero Flor Green Roof System. XFA has made its home in Durham, N.C., since 2006 when the company relocated its national headquarters from Lansing, Mich. In July 2012, it moved locally into renovated offices in The Republik Building, located at 211 Rigsbee Avenue in downtown Durham’s historic district.

Originally constructed in the 1940s for the Durham Insurance Service Co., The Republik Building is perhaps known to local history buffs as the home of WSSB radio. Robert Shaw West, chairman and CEO of The Republik, a local firm offering brand strategy and communication services, purchased the property from the city of Durham. He renovated the outmoded offices into a more contemporary, open and collaborative work environment in 2006. XFA decided to become more connected to the business community downtown and searched for offices in the historic district—ideally in a building where the company would have the opportunity to showcase its green roof system. West had space available on the second floor for XFA to lease. 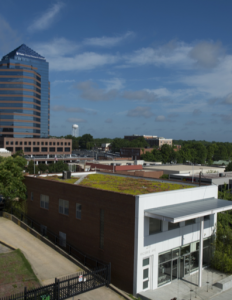 Completed in February 2013, the 2,343-square-foot Xero Flor green roof atop The Republik Building is the first green roof installed on a building in Durham’s downtown historic district.

“It was serendipity,” West says. “Xero Flor was looking for offices downtown, and we had space. Plus, we had to reroof our building last year. Since we needed a new roof, it was an ideal time to also consider adding a green roof, which supports our commitment to sustainability.”

Completed in February 2013, the 2,343-square-foot Xero Flor green roof atop The Republik Building is the first green roof installed on a building in Durham’s downtown historic district.

Going Green on the Roof

In addition to the standard building-permit process, putting a green roof on a historic building required additional review and approval.

According to Anne Kramer, urban designer with the Durham City-County Planning Department, except for certain minor items, such as repainting a previously painted surface, most changes to building exteriors within an official historic district require a Certificate of Appropriateness (COA). The Durham Historic Preservation Commission oversees the process locally.

The commission’s goal is to ensure preservation of the architectural character of the historic district’s buildings and, therefore, had to ensure adding a green roof to the building would not alter or disrupt the appearance of downtown Durham. Demonstrating a green roof would not be visible from the street level was especially important. With the COA from the preservation commission, XFA and The Republik had the green light for the green roof. But first Baker Roofing, Raleigh, N.C., installed the new structural roof.

David Aquilina, Strategic Storyteller, is a corporate communications consultant and freelance writer based in Minneapolis.

Be the first to comment on "Downtown Storm-water Management"