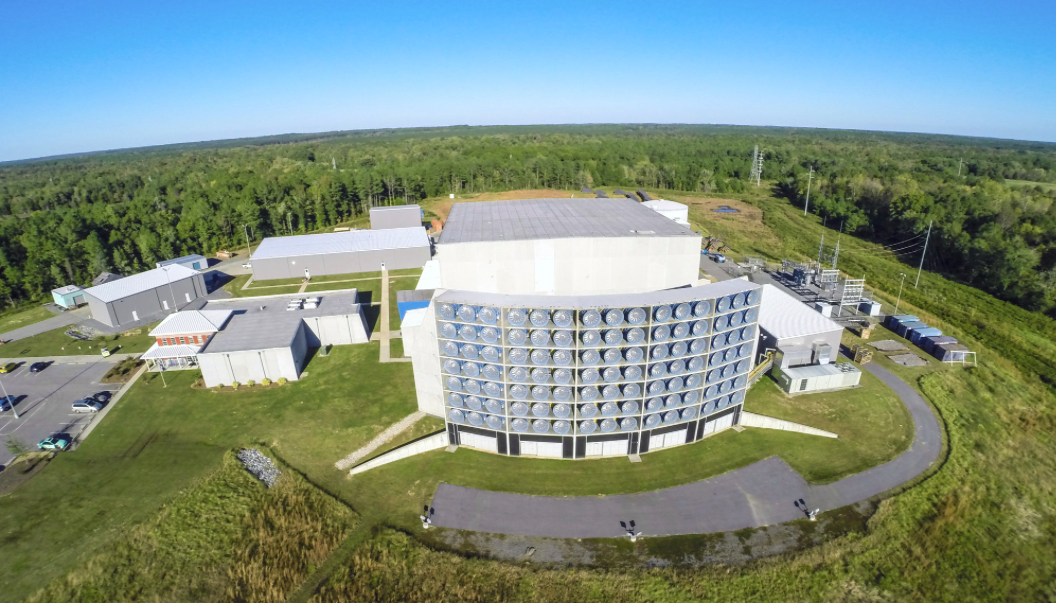 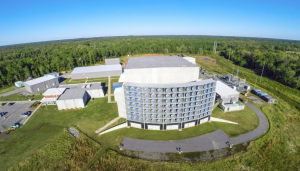 Until early October of this past year, Chester County, South Carolina, was home to a small, single-story house, similar to thousands of houses across the United States, but unique in almost every way.

What made this small structure one of a kind? The house sat inside the large test chamber at the Insurance Institute for Business and Home Safety (IBHS) Research Center, dwarfed by the six-story chamber’s cavernous interior. The house was built, in fact, to be destroyed.

On Oct. 5, the staff of the IBHS Research Center focused the test chamber’s intense destructive wind power, generated by 105 super-sized fans, on the small structure. Prior to the test, the center had digitized the wind record of an actual storm, and the wind speeds produced by the fans were varied accordingly. In the case of the simulated storm in early October, wind speeds were increased in three phases, up to 120 miles an hour. The house experienced significant damage to its walls and interior, and the garage door was ripped off. But the roof, built to IBHS’ recommended standards, held firm.

The IBHS research facility, which opened in 2010 and is funded by property insurers, evaluates various residential and commercial construction materials and systems. The lab is the only lab in the world that can unleash the power of highly realistic windstorms, wind-driven rain, hailstorms and wildfire ember storms on full-scale one- and two-story residential and commercial buildings in a controlled, repeatable fashion.

The mission of IBHS is to reduce the social and economic effects of natural disasters. And much of its research, like its attack on this small house last October, has focused, at least in part, on the resilience of roofs. As IBHS President and CEO Julie Rochman has noted, “The roof is your first line of defense against anything Mother Nature inflicts … and during a bad storm your roof endures fierce pressure from wind, rain, and flying debris.”

In May of 2017, the EPDM Roofing Association (ERA) launched a microsite to help educate the construction industry about the increasing need for resilience in the built environment, and the contributions that EPDM roofing membrane can make to a 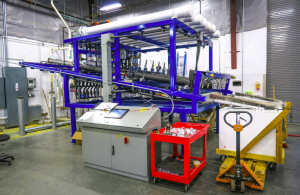 IBHS conducts hail research in the Laboratory Building for Small Tests, where hailstones of various sizes are recreated and propelled against roof samples. Photos: Insurance Institute for Business and Home Safety.

resilient system. That effort came in response to the increasing number of extreme weather events. Since last May when ERA first launched its resilience microsite, the pattern of extreme weather has continued unabated, in the form of wildfires throughout the west which were exacerbated by extreme heat, and Hurricanes Harvey and Irma which left devastating floods and wind damage in their wake.

For more than a decade, ERA leadership has supported research about factors that contribute to the resilience of EPDM as a membrane, and how it best functions in various roofing systems. More recently, ERA has invested in site-visits to leading research organizations that generate science-based data about resiliency in building systems, first to Oak Ridge National Laboratories, near Knoxville, Tennessee, and then to the National Research Energy Laboratories (NREL) in Golden, Colorado. Given the complementary goals of ERA and IBHS to help support the creation of truly resilient buildings, ERA leadership welcomed the opportunity to visit the South Carolina research facility.

The hail research at IBHS was of special interest to ERA, given ERA’s research that has consistently shown that EPDM membrane offers exceptionally strong resistance against hail damage. Based on field and test data sponsored by ERA, EPDM roof membranes outperform other roof systems in terms of hail protection. In 2007, ERA conducted tests which showed that EPDM roofing membranes did not suffer membrane damage and avoided leaking problems endemic to other roofing surfaces in similar circumstances. Of the 81 targets installed for that research over different surfaces, 76 did not fail when impacted with hail ice balls up to three inches in diameter. Perhaps most importantly, the impact resistance of both field-aged and heat-aged membranes in this test also clearly demonstrated that EPDM retains the bulk of its impact resistance as it ages. 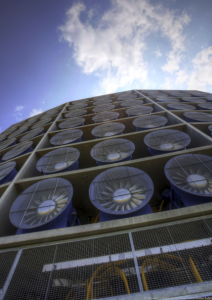 The IBHS Research Center’s super-sized fans can recreate winds to measure their effects on full-scale one- and two-story residential and commercial buildings. Photos: Insurance Institute for Business and Home Safety.

Using this ERA-generated research as a starting point, ERA leadership travelled to IBHS with specific questions in mind, including: What has IBHS research revealed about the impact of hail on various types of roofing membranes and systems? Does the IBHS research reinforce or contradict ERA’s findings? What are the next questions to be asked about the damage that hail can do, and are resilient systems cost-effective?

Hail research at IBHS is conducted in the Laboratory Building for Small Tests, a compact structure with equipment appropriate to replicate large hailstones and hurl them at roof samples. As part of its research, IBHS has worked with the National Weather Service to assess the geographic locations threatened by hail. Individual storms have long been recognized as creating widespread and expensive destruction, but is hail a threat that is confined to just a few specific geographic areas of the country?

In fact, more than 75 percent of the cities in the United States experience at least one hailstorm a year, and the risk extends across the country to all areas east of the Rockies. Annually, hail losses reach more than 1 billion dollars. The IBHS has identified the factors that contribute to the extent of hailstorm damage, with the impact resistance of roofing materials being one of the most critical factors, along with hailstone size, density and hardness. Likewise, the roof is one of the components most vulnerable to hail. Analysis of property damage resulting from a hailstorm in Dallas-Fort Worth in 2011 found that roof losses accounted for 75 percent of property damage in the area, and more than 90 percent of damage payouts.

In their efforts to replicate the true nature of hail, the staff at IBHS has conducted extensive fieldwork, and travelled widely around the United States to gather actual hailstones immediately after a storm. Over the last five years, the IBHS hail team has collected more than 3,500 hailstones, focusing on their dimensions, mass and compressive stress. The stones range from .04 inches in diameter to well over four inches. In addition, IBHS has conducted three-D scans of more than one hundred stones to further educate themselves about the true nature of hailstones, and how they contribute to the overall damage inflicted by hailstorms.

The research findings of IBHS reinforce or complement those of ERA. IBHS has found that unsupported roofing materials perform poorly and ballasted low-slope roofs perform especially well in hailstorms because they disperse energy. IBHS recommends that builders use systems that have impact resistance approval, including their own fortified standard. While IBHS found that newer roofing membranes perform better than older membranes, ERA studies found that new, heat-aged and field-aged EPDM membranes all offered a high degree of hail resistance, demonstrating that EPDM retains the bulk of its impact resistance as it ages.

Both organizations stress that resilient roofing systems in new and retrofitted construction can make good financial sense. According to Julie Rochman of IBHS, “We are really going to continue focusing on moving our culture from one that is focused on post-disaster response and recovery to pre-disaster investment and loss-mitigation … we’re going to be very focused on getting the roofs right in this country.”