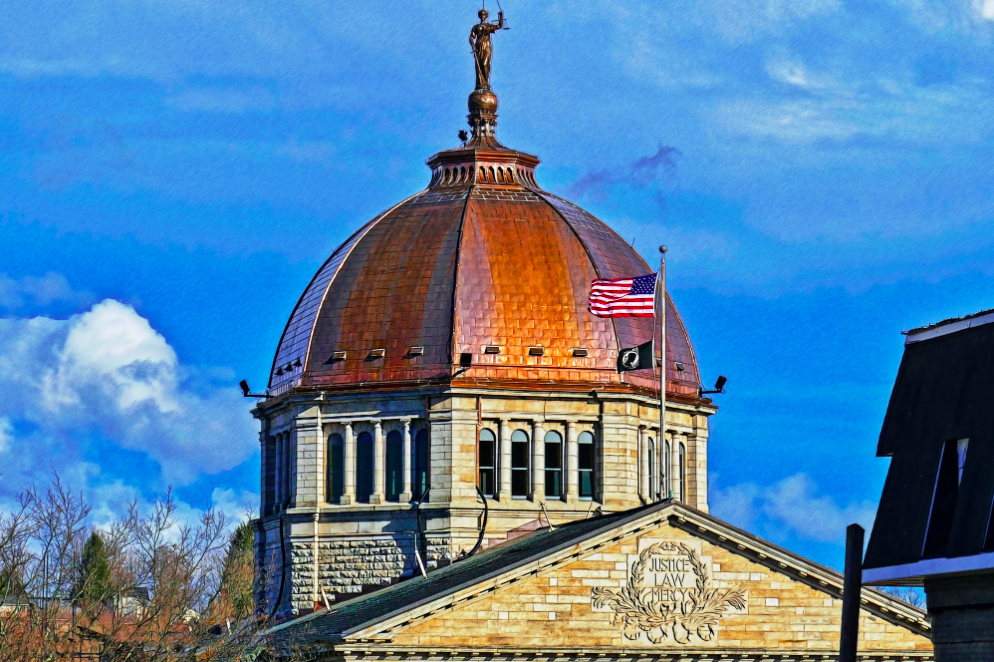 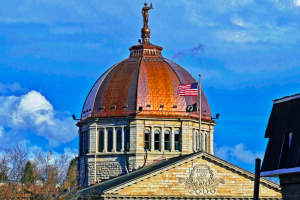 The dome on the Bradford County Courthouse was restored with copper panels during the first phase of a $3 million renovation project. Photos: Charles F. Evans Roofing Company Inc.

The octagonal dome atop the Bradford County Courthouse has been a fixture on the Towanda, Pennsylvania, skyline for more than 120 years. It now shines brightly after being restored with copper panels as part of a $3 million renovation project.

Built in the Classical and Renaissance revival styles in 1898, the four-story courthouse was placed on the National Registry of Historic Places in 1987. The dome’s original roof tiles were recently replaced as part of the project, which also included the complete restoration of the structure’s main roof.

The Charles F. Evans Company Inc., the union division of Evans Roofing Company Inc., headquartered in Elmira, New York, has a long history of successfully tackling projects with historical significance. C&D Waterproofing Corp., the general contractor on the project, reached out to the firm for support assessing the roofing portion of the project. The two companies teamed up on the project, with C&D Waterproofing handling the masonry restoration work and Charles F. Evans Company installing the roof systems.

Construction Manager Bill Burge of Charles F. Evans Company was thrilled to be part of this historic project. Before 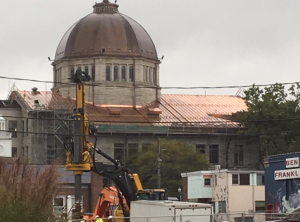 Originally completed in 1898, the courthouse was placed on the National Registry of Historic Places in 1987. The building’s main roof was removed and replaced with a copper batten seam roof after work on the dome was completed. Photos: Charles F. Evans Roofing Company Inc.

concentrating on the installation details, he knew the company would focus on the top priority. “Safety is number one,” says Burge. “Safety comes before profits. Safety comes before everything. We always want to make sure we have the right safety plan going into the job, and throughout the job, we are maintaining that plan and working that plan. We want our guys to go home to their families at the end of the day, so that’s key for us.”

Burge worked as a union carpenter for 10 years before joining the company more than seven years ago. He found he had an affinity for sheet metal work. “The craftsmanship and quality goes hand in hand with carpentry,” Burge says. “Everything starts with the carpentry. You have to have your base perfect; otherwise, everything from there on out doesn’t work. Sheet metal is a finished product, typically, especially in our business, so things have to be done right. Things have to be done to the highest standard of quality, because that’s what people see.”

The dome was designed to be a showpiece, and Field Superintendent Brian Babcock and his crew of qualified union sheet metal mechanics knew they would be held to an exacting standard. “The key to this project and every project is our talented mechanics in the field,” Burge says. “Charles F. Evans Company is nothing without this talent—they deserve all of the credit.”

Phase One began with the removal of the tiles on the dome. “The ceramic tile was laid over open steel purlins,” Burge notes. 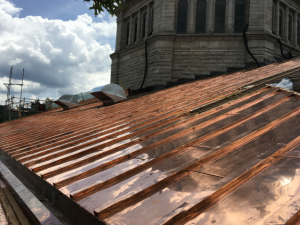 “There was open framing with quarter-inch steel angle for the purlins, and each piece if tile was wired on. The removal process was fairly simple. You could actually lift up the bottom of the tile and snap it off.”

The removal work had to be done in sections and dried in every night. “One of the hardest things about this process was we had to install two layers of half-inch plywood over the steel purlins and anchor those down,” says Burge.

The plywood was attached to vertical two-by-fours, which were screwed into the purlins. The plywood was covered with one layer of Warrior 30-pound felt paper, Meadows Red Rosin Paper, and Grace Ultra High Temp underlayment in gutter areas.

The built-in gutter at the base of the dome was torn out and re-framed. The new gutter was wider and deeper according to the recommendation of Levine & Company Inc., the architect on the project. “We did everything to specification as Levine & Company drew it,” says Burge.

Once the cladding was completed on the gutter, the copper panels of the dome were installed. The 20-inch panels were made of 20-ounce, cold rolled copper, supplied by Revere Copper Products. Both the panels and cladding were fabricated in Charles F. Evans Company’s fabrication shop. The copper panels clip to each other and have a hem on four sides that clips 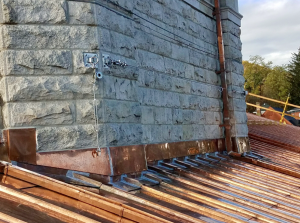 Custom flashing pieces were fabricated and installed where the copper roof panels met the base of the dome. Photos: Charles F. Evans Roofing Company Inc.

to the adjacent panel fastened to the deck. At the top of each panel, a hook clips off to the plywood, and the hook is covered by the panel directly above it.

Burge points out that the octagonal structure of the dome helped speed up the installation of the copper panels. “There are eight hips on the dome,” he notes. “Every section of the dome is like a piece of pie, basically, so we were able to start the panels in various locations. We didn’t have to start at one end and go around the dome. We could move around.”

Repairing the statue on the top of the dome was also part of the scope of work. “We soldered copper patches on any damage the statue had,” Burge says. “C&D Waterproofing completely cleaned and buffed the statue and applied a copper coating.”

After the work on the dome was completed, work began on the main roof. The existing roof was removed down to the existing steel deck. The lower roof also had a built-in, copper-clad gutter that had to be removed and reconstructed. After 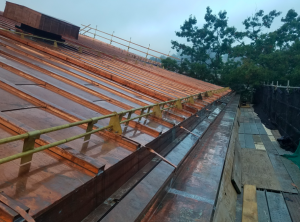 Scaffolding systems were constructed for both phases of the project. Shown here is part of the system installed around the lower roof, which featured planks and guardrails at the eave and rake edges. Photos: Charles F. Evans Roofing Company Inc.

the gutter was completed, work on the main roof began. “After we completely cleaned the metal decking, we had to install a layer of Grace Ultra High Temp underlayment,” Burge recalls. “We then installed two-by-four wood sleepers, 2 feet on center.”

Crews installed 1.5 inches of polyiso insulation between the two-by-fours, followed by another 1.5-inch layer of polyiso. Pieces of 5/8-inch plywood were then screwed down to the sleepers. The plywood received 30-pound felt, and the battens were installed 20 inches on center. The seams were completed using a custom-designed mechanical seamer manufactured by Roll Former Corp.

Installation of the 12,000 square feet of copper panels went smoothly, but where panels met the dome, details were tricky. “Everything is pitched, and the dome has eight different sections sitting right in the center of the structure,” Burge explains. “A lot of time and energy went into fabricating and installing custom flashing pieces at the base of the dome.”

A scaffolding system was the key to the safety plan for both phases of the project. “For Phase One, we had to remove a portion of the roofing system and put down some plywood on top of the existing roofing in order to build a scaffold to access the dome,” Burge says. 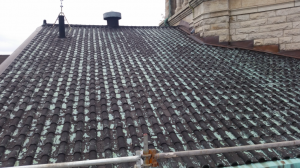 Scaffolding was constructed to the eave edge of the copper dome, allowing the gutter to be removed. Ladders were used to access the dome and personal fall arrest systems were attached into HitchClips from Safety Anchor Fall Equipment, LLC, which served as individual anchor points. “We continued that process as we went up, using ladder jacks,” says Burge. “We continued with that plan, and never deviated.”

After Phase One was completed, the scaffolding was removed, and another scaffolding system was installed around the entire lower roof. Phase Two required planks and pre-engineered guardrails at the eave and rake edges. “Part of process of installing this roof included installing new safety anchors at various locations, and as we finished up, we were able to use those anchors as tie-off points,” Burge points out.

Phase Two is scheduled for completion in early November, and Burge has high praise for everyone involved with the project. “Levine & Co. Inc. is the architecture firm on the project,” he says. “We didn’t deter from any details developed. They drove this thing. We have worked with them on a great many projects in the past, and we have a great comfort level with them.” 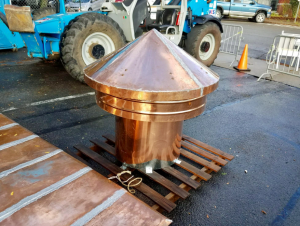 The masonry and roofing work had to be well coordinated. “C&D Masonry & Waterproofing progressed ahead of us with items that we needed to be done, and then came back behind us to mortar all of the counter flashings back into the dome,” Burge says. “They were right there with us every step of the way.”

Finding the right combination of workers for this project was crucial, according to Burge. “We had one of our best crews on this project for a reason,” he says. “This project was led by Brian Babcock of Sheet Metal Local 112, and he was essential in putting this whole thing together. He’s been with Charles F. Evans Company for 20 years, and his leadership and focus is the reason this project is going to be successful.”

Ornate sheet metal work is rare these days, but the art is not lost at Charles F. Evans Company. “We’ve been doing this work for 60-plus years,” Burge says. “This knowledge and this workmanship has been handed down generation after generation. We wouldn’t have taken on this project if we didn’t have the confidence in our employees that we do.”

Historic restoration projects are becoming an increasingly bigger chunk of the company’s portfolio, notes Burge. “We do a lot of work with older universities and businesses that have these types of buildings,” he says. “A lot of buildings need this type of work, and it’s a trade not everyone else has. This is a craft that takes years to master. We harness that, we build from within, and we bring in young guys and teach them how to do it the right way. We have a great mix of people ages 23 up to 60, and it’s learned, it’s taught, and it’s preached.”

Burge is hopeful the new roof will last at least as long as its predecessor. “This is the one thing that makes Charles F. Evans Company special to me: the fact that what we do from an architectural sheet metal standpoint, from a slate, copper, tile roof standpoint—these roofs will last 100, 150 years, and it is artwork,” he says. “The fact that you’re a part of something that’s been around since the turn of the last century—to me it doesn’t get any better than that.”

Three Polyiso Roof Insulation Options to Simplify Your Next Job