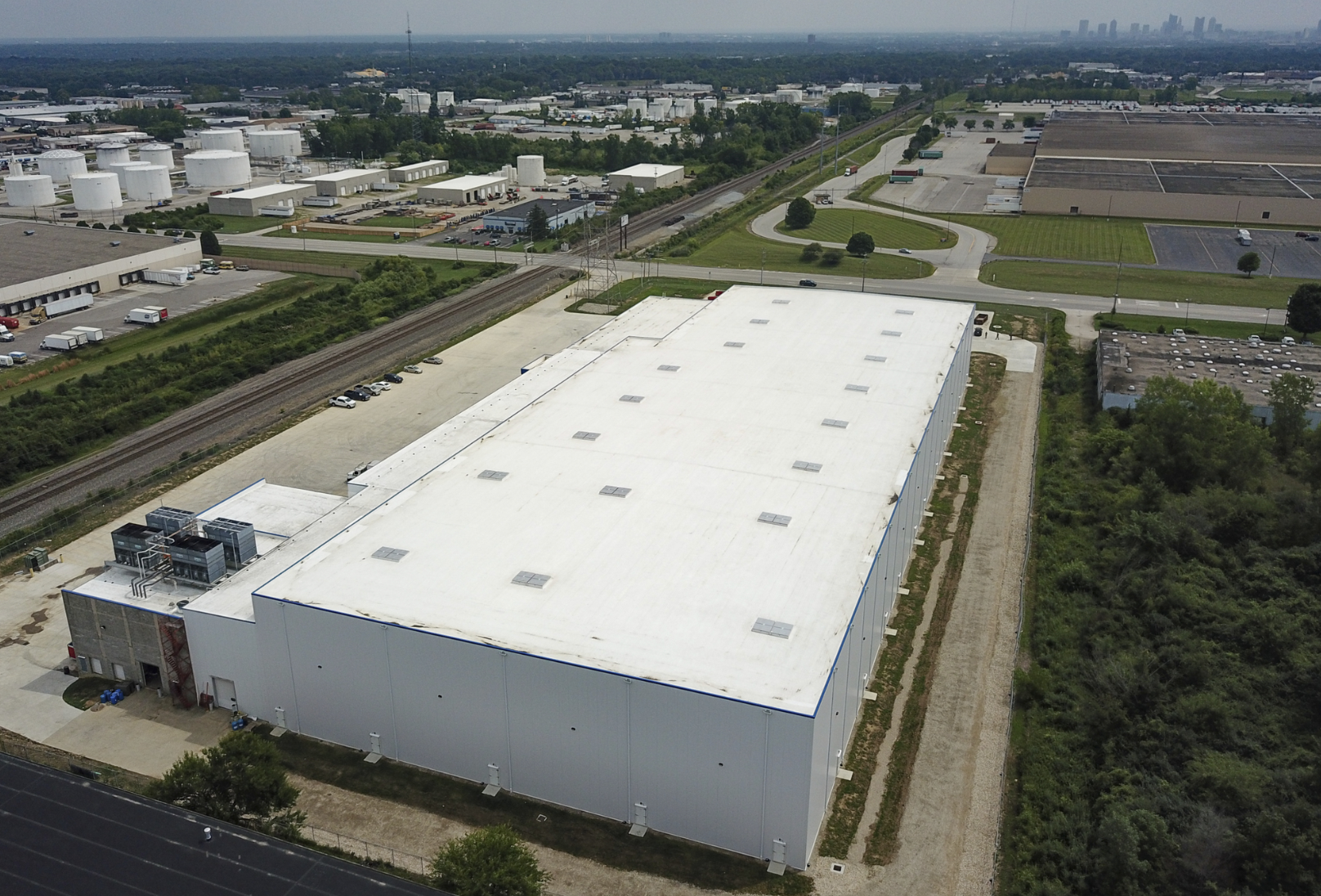 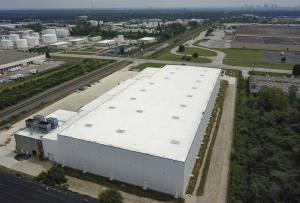 When the executive leadership at Dick Cold Storage decided to build a brand-new facility, the company made certain that the new structure would have increased fire protection — especially with its roofing system.

The roof of the building includes 18 BILCO automatic smoke vents that allow firefighters to bring a fire under control. The vents allow for the escape of smoke, heat, and gasses in a burning building. The Dick Cold Storage building where the 2016 fire occurred was not equipped with automatic smoke vent protection.

“Two of the biggest challenges we face in fighting any fire are heat and smoke,’’ says Steve Martin, Battalion Chief for the Columbus Fire Department. “The heat of the fire radiates on everything surrounding it, causing the flames to spread and causing rapid degradation of structural elements.”

More than 400 firefighters battled the fire at Dick Cold Storage, which broke out at approximately 9 p.m. on a Friday. No one was hurt in the fire, but residents in the neighborhood evacuated the area for fear they would be exposed to chemicals used to refrigerate food in the warehouse. The cause of the fire was not determined.

“At that time, you just feel completely lost,’’ Don Dick, the company President, says about his thoughts as he watched the blaze roar through the building where his family had done business for nearly a century. “You have no idea what will happen to your business.” 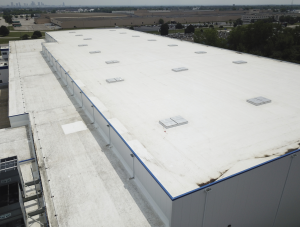 Because the building lacked smoke vents, firefighters were stymied. Martin said the smoke impeded visibility, made it difficult to assess damage to the structure and find the origin of the fire. Even with tanks of fresh air on their backs, the brave Columbus firefighters could do little more than watch the blaze burn itself out. The fire was contained within 18 hours but had not been completely extinguished for days.

“Buildings that do not lend themselves to ventilation, such as cold storage buildings, are especially dangerous to firefighters. If there is no known life-safety issue, firefighters will retreat to a defensive position and fight the fire from outside the building instead of going inside,’’ Martin notes.

The fire at Dick Cold Storage would not have been prevented with smoke vents, but the devastating property loss could have been minimized. Firefighters may have been able to aggressively attack the blaze, but because of the lack of visibility and uncertainty of the structural damage within the building envelope, Martin and his crew had no other alternative other than to wait for the fire to die.

Dick Cold Storage executives made sure to include smoke vents in its new building. Manufactured by The BILCO Company, the custom-made vents measure 7 feet by 18 feet and include a quad leaf design. Tippman worked with Spohn Associates to procure the vents. The size of a building, among other factors, determines the number and size of vents required for a building. The vented space must comply with fire codes. 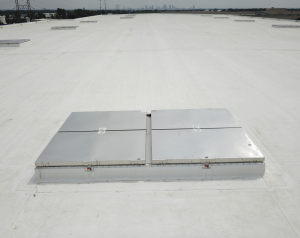 The roof of the building is equipped with 18 BILCO automatic smoke vents that allow smoke, heat, and gasses to escape from a burning building. Photo: Ryan Leasure

Tippmann worked with Spohn Associates, The BILCO Company’s Indiana based sales representative, to determine the number of vents used for the new building.The vents include a Thermolatch II positive hold/release mechanism designed to ensure reliable operation when a fire occurs. It also automatically releases vent covers upon the melting of a 165°F (74°C) fusible link. Gas spring operators are designed to open the covers against snow and wind loads and include integral dampers to ensure that the covers open at a controlled rate of speed.

“Vents will allow for the removal of heat and smoke will potentially slow the spread of fire,’’ Martin says. “They will also permit firefighters to see and enter the building, to possibly extinguish the fire early, preventing the entire building from becoming a loss.”

Like the rest of the materials used in building a cold storage facility, architects need to choose roofing components carefully. The thermal properties and unique usage of cold storage buildings require extra attention to detail in choosing the construction materials.

One of the most critical is constructing vapor-tight and energy efficient roof systems. Tippmann used a single-ply roofing system with 45-mil and 60-mil TPO, which serve as excellent vapor barriers. Single-ply systems also minimize air leaks. Those leaks can lead to thermal loss and excess moisture.

Tippman also paid extra attention to the vapor barriers, which are used to prevent moisture from damaging the fabric of the building. It’s also incumbent on roofing contractors to choose the proper insulation to maximize energy efficiency. 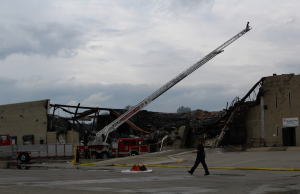 When fire engulfed the facility, firefighters could do little more than watch the blaze burn itself out. The fire was contained within 18 hours was not completely extinguished for days. Photo: Walker Evans, Columbus Underground

Improperly installed or inefficient roofing materials could lead to disastrous consequences for cold storage buildings. Vapor leaks and excess moisture could create bacterial growth. Other side effects could include structural damage from ice buildup on walls and slabs, higher utility costs, safety issues for workers and equipment that may require more maintenance or not reach its expected lifespan.

Tippman Innovation served as the architect, general contractor and roofing contractor for the project. “Tippmann Innovation’s experience and reputation in cold storage building is well-known and respected,’’ Don Dick notes. “After touring one of Tippman’s newly-completed projects, we were very impressed with the company’s commitment to quality, design, and technology. We’re confident that our new facility will be at the cutting edge of cold storage innovation.”

Cold storage facilities are used for keeping food products and other perishables for distribution to supermarkets and other retail outlets that sell to consumers. Dick Cold Storage’s Columbus location serves customers in a 550-mile radius, covering a geographic area that reaches Wisconsin, Alabama and New York and a population of more than 138 million people.

The new facility includes LED lighting, frozen, cooler and dry storage, and the most energy-efficient refrigeration equipment. “We want to be able to move product extremely fast,’’ Don Dick says. “We’re very conscientious of food safety and storing product, so we try to do everything the right way.”

Dick Cold Storage made a huge financial investment in its new facility, and Tippmann Innovation paid tremendous attention to all of the construction materials, especially the roofing. With a new building that can better withstand the potential of a catastrophic total product and facility loss that can be caused by fire, the business heads into its second century with new goals and new vitality.

“When you have time to think, you realize you just gotta get up and running and get back to what you are doing,’’ Don Dick says. “You have to be as efficient as you can. We thought it was dead, but you can’t think that way. You have to think what we are going to do from this day forward.”

FlashCo Acquires All Fab, LLC, Creator of the Easy Flapper