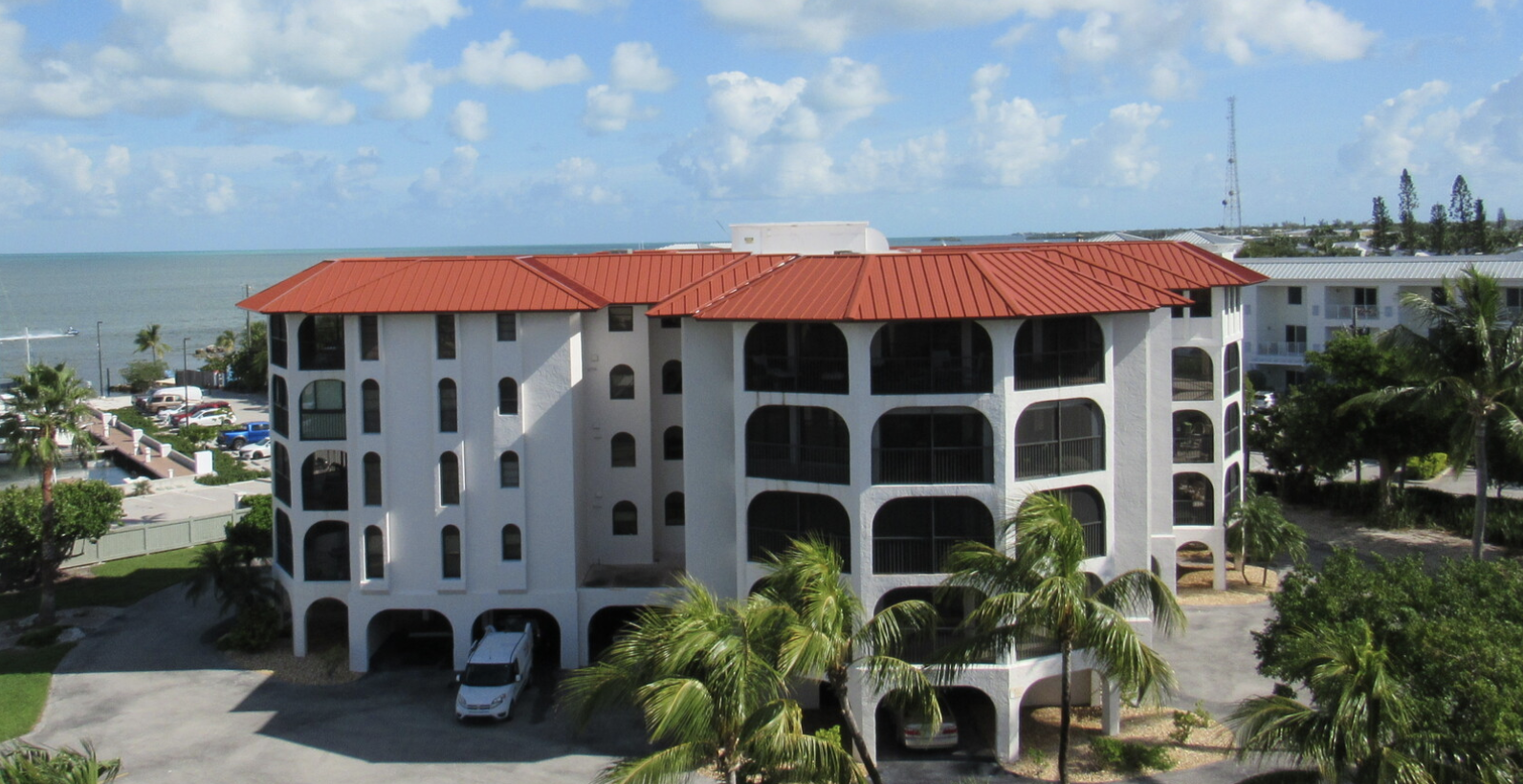 Sometime during the drive between Kissimmee and Key West in September 2017, Dion Watson and Deb Shirley realized life would never be the same.

Watson, owner of Keys All Area Roofing, and longtime partner Shirley were headed home from Central Florida after escaping the wrath of Hurricane Irma when the phone started ringing. For the next 380 miles, one caller after the other pleaded for help with their destroyed roofs.

Irma had ripped through the Keys as a Category 4 storm, leaving little untouched in its path. By the time Watson and Shirley reached Key West, they had fielded some 400 calls.

Work at Keys All Area went from a comfortable and steady pace of residential and commercial jobs to a breakneck frenzy of weathering the aftermath.

“I don’t even remember the first year after the hurricane,” Watson says. “My life is divided into before Irma and after Irma. It was crazy. We had almost 80 guys down here roofing seven days a week and couldn’t get it done.”

As one of the only female-owned roofing companies in Florida’s southernmost region, Keys All Area has crushed the stereotype that roofing is man’s work. Watson and Shirley don’t focus on being women in a male-dominated business, though; they focus on providing quality work.

The 18-person company has proven itself as a dedicated community partner, helping locals get back on their feet and ensuring that landmarks, like the Faro Blanco condo buildings in Marathon, remain intact.

In addition to working on private jobs (like the Faro Blanco buildings), Keys All Area has re-roofed hurricane-damaged homes in coordination with the Monroe County Long Term Recovery Group, the American Red Cross, Habitat for Humanity and the Florida Conference of the United Methodist Church. In October 2018, Keys All Area was recognized by the Marathon Chamber of Commerce with a Community Contribution Award.

All of this from two women who knew little about roofing just a few years ago.

Watson and Shirley moved to the Keys from Arkansas in 2006 to be closer to family, leaving behind their careers in human resources. In the Keys, Watson worked at a marina and became fast friends withDoug Richards of Tampa-based All Area Roofing & Waterproofing. With Richards’ encouragement, Watson learned the nuts and bolts of roofing, from quoting jobs to laying shingles, and opened a de-facto branch of All Area Roofing. Watson worked alongside the Tampa-based All Area crews, learning roofing one nail at a time.

In early 2015, Watson and Richards purchased an established, reputable Keys-based roofing company, including the trucks, inventory and phone number, to bring new standards of excellence in roofing to the area. Keys All Area Roofing was born.

“I was on every job, from start to finish, and learned every day about the roofing industry,” Watson says. “My main goal was to bring mainland quality roofing to the Keys.”

For Watson and Shirley, the catastrophic damage meant the roofing business was about to go into overdrive.

Arriving in Key West, the women found their own home damaged — part of the porch roof was torn off, siding was missing and the backyard was decimated — but it was nothing like what happened to their neighbors. Roofs that were once the crowning glory of Key West bungalow homes now cluttered the streets.

In the weeks and months that followed, Keys All Area multiplied its staff to keep up with the demand. Shirley, an organizational whiz, quit her job in the aircraft-parts industry to become the Keys All Area director of operations, keeping the business running smoothly.

Watson and Shirley pushed back against roofing scammers by helping locals understand their options and make sense of the confusing regulations and codes in the rebuilding efforts. The women believe in honesty and quality work.

“Our quality is not going to change because it’s a residential three-square shed in the back of somebody’s yard,” Watson says. “Every job we do is like we’re doing a warranty job. Whether it’s a two-square job on a shed or a 100-square job in a shopping center, we do them the same way.”

The can-do approach, coupled with a commitment to the community, helped Keys All Area land one of its most complicated jobs yet — Faro Blanco Condominiums.

Compared to other buildings in the Keys, the Faro Blanco condos — twin five-story structures with octagon-shaped and flat roofs — fared well in the storm. Even so, many of the terracotta roof tiles were damaged beyond repair, so the condo association wanted new roofs that retained the original character with improved durability.

The residential buildings, located near the landmark Faro Blanco lighthouse, resort and marina, had to continue the area’s Mediterranean-style aesthetic. The choice: Gulf Coast Supply & Manufacturing’s 0.032 aluminum VersaLoc with 1.5-inch mechanically seamed panels in Terra Cotta for the highly visible mansards and Firestone UltraPly TPO with a tapered insulation system for the low-slope roof.

Teamwork at its Best

Even before the job began, Watson knew the constant ocean winds, surrounding landscape and continuous stream of residents and visitors into the buildings meant someone could easily get hurt.

The mansard and flat roofs also meant two teams needed to work simultaneously to get the job done on time. While an eight-person team was pulling tile from one roof, a 12-person team was removing the existing flat roof. An 80-foot telescoping forklift hoisted the more than 1,500 metal panels, and a boom lift ensured workers would be safe at the steep angles.

Watson says the work was made easier with Gulf Coast Supply’s assistance. Gulf Coast packaged the materials in reinforced crates so everything could be safely loaded onto the roofs and also helped with the tear-offs. The job was estimated to take 16 weeks, but the work was completed in 10 weeks, wrapping up in March of 2019.

The Gulf Coast Supply materials, style and color complement the original design and add improved structural integrity to the roof, according to Watson. While metal roofs are not mandatory in the Keys, they have become a standard for safety in storm-prone areas.

The high-velocity-wind clips and corrosion-free fasteners were used to ensure protection against the harsh elements (sun, sand and salt) that can cause rust and weathering. A polyvinylidene difluoride (PVDF) finish on the aluminum protects against harsh UV rays for long-lasting and vibrant color.

“It’s beautiful,” Watson says. “I would say Faro Blanco has been probably the biggest feather in my cap.”

In the coming months and years, Watson hopes to grow the company with a continued emphasis on customer service and support. Even though it’s been more than two years since Irma, there’s plenty more work.

“Irma recovery is ongoing with many people just now getting insurance money or assistance from nonprofits to get their roofs replaced,” Watson says. “Sadly, we still have a lot of work to do from the damage of Irma.”

About the author: Bo Copeland is the inside sales manager for Gulf Coast Supply & Manufacturing. Copeland has been lauded for his commitment to excellence in the roofing industry as the 2018 Earl Blank Memorial Service Heart Award recipient from the Florida Roofing and Sheet Metal Contractors Association (FRSA).

IBHS Encourages Hurricane Preparation Despite Predictions of a Quiet Year