For most of the past century, the rooftops of commercial and institutional buildings have largely been places to locate unsightly mechanical systems. Architectural treatments, such as parapets and screens, provide visual relief from such equipment. Now, roofing professionals and building owners increasingly look at the roof as “found space”—a place to be planted and used, instead of hidden.

Throughout the U.S., garden roofs (or living roofs) are growing in popularity with more than 5.5 million square feet installed in 2014, according to Green Roofs for Healthy Cities. Most of that total was for private rather than public projects, indicating this is not just a government trend. In addition to providing attractive and usable open space, garden roofs offer environmental benefits, such as helping to slow and filter urban run-off.

If you haven’t worked on a garden roof yet, it is likely only a matter of time until you do.

Addressing the Challenges of Garden Roofs 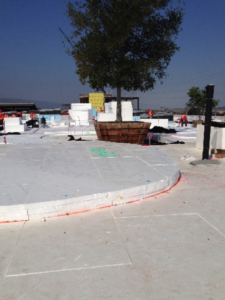 Weighing considerably less than soil, EPS geofoam is an ultra-lightweight engineered fill that can be used to create contoured landscape features, such as hills and valleys. The material weighs from 0.7 to 2.85 pounds per cubic foot, depending on the product type specified, compared to 110 to 120 pounds per cubic foot for soil.

Despite its low weight, EPS geofoam is designed for strength and has better load bearing capacity than most foundation soils. Geofoam’s compressive resistance ranges from approximately 2.2 psi to 18.6 psi (317 to 2,678 pounds per square foot) at a 1 percent deformation, depending on the product. 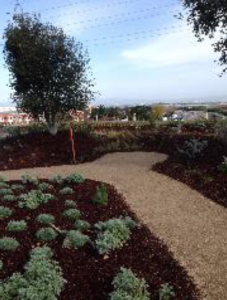 EPS geofoam is also effective at addressing the second challenge of garden roofs: managing moisture absorption. The moisture performance of the various components in a green roof assembly is critical; retained water imposes additional loads on the roof and increases the risk of water damage to the roof assembly. EPS geofoam meeting ASTM D6817 standards works well here as it only absorbs 2 to 4 percent moisture by volume, even over long-term exposure, and it dries quickly. The moisture performance of EPS has been demonstrated in extensive in-situ applications and real-world testing, including research conducted by the U.S. Army Corps of Engineers’ Cold Regions Research and Engineering Laboratory. After burying EPS in wetted soil for nearly three years, the lab found that the material absorbed only 1.7 percent moisture by volume.

In addition to enabling lightweight, durable landscape features and helping to defend against water, EPS geofoam provides thermal insulation in garden roofs. Roofing professionals have used EPS insulation in roof assemblies for decades because it offers the highest R-value per dollar among rigid foam insulations.

Although green roofs currently account for a small portion of the billions of square feet of roofs in the U.S., expect to see more demand for them given their aesthetic and environmental benefits. High-performance materials, like EPS geofoam, can help provide a long-lasting, durable green roof assembly.

Michael McAuley is the president of Insulfoam. He has more than 20 years' experience in building material sales and production management, including 14 years at Insulfoam's sister company, Versico Roofing Systems, as the national sales manager and general manager.

At North Bethesda’s Pike & Rose, the Farm Is on Top of the Building