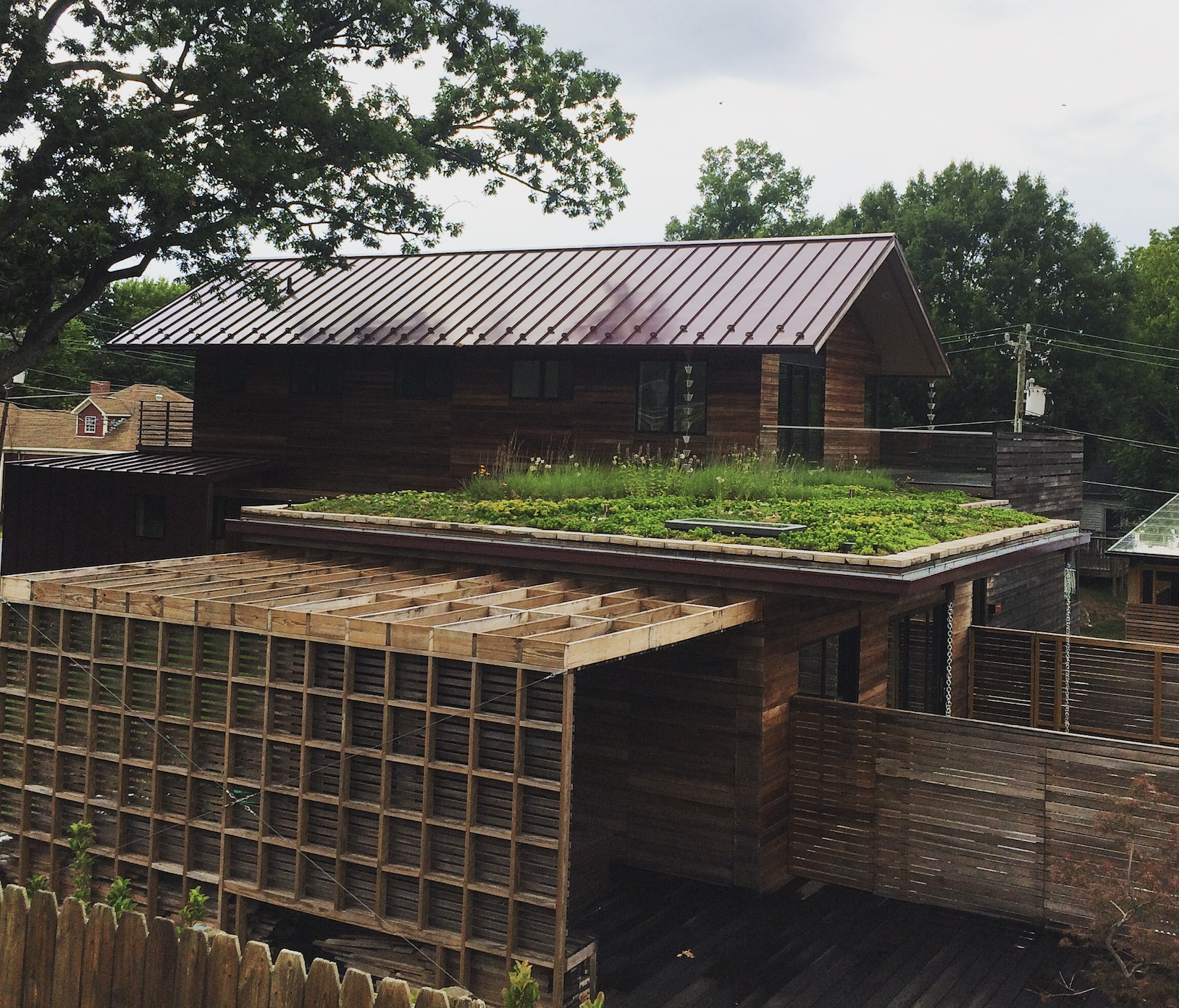 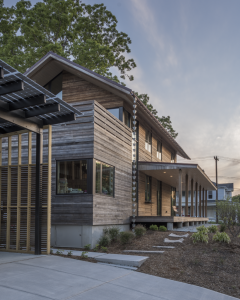 The custom home in Durham, North Carolina features a standing seam metal roof, a balcony, a roof deck and a garden roof. The carport roof is made from solar panels. Photo: David Solow.

When Alison Trott purchased a vacant corner lot in the historic Cleveland-Holloway neighborhood in Durham, North Carolina, she wanted to use the space to construct her dream home. She wasn’t sure exactly what she wanted, but she had several priorities in mind. “When I built the house, I wanted to try and focus on sustainability as much as possible,” says Trott. “I wanted to try to focus on green building, and I wanted to try to utilize local resources as much as possible — local materials, local builders, local companies, and local craftsmen.”

She worked with a talented team of design and construction professionals to bring her vision to life, and the sustainable roof systems on the home became a crowning focus of the project.

At some point in the design process, the architect mentioned the possibility of incorporating a garden roof, and Trott jumped at the idea. “I said, ‘I want that!’” Trott recalls. “I was very excited about the idea, but I’d only seen green roofs on large commercial projects.”

Tina Govan, now principal of Somos Design, located in Raleigh, North Carolina, hit it off with Alison Trott right away. The two worked together on the design for several years, inviting CUBE design + research, an architecture firm in nearby Chapel Hill, to collaborate on the project.

The goals included constructing a modern home that would blend in with the historic neighborhood. The house was also designed to be part of the natural landscape. A key priority was saving two large oak trees on the property. “We wrapped the house around the trees,” notes Govan. “That way the house bends to nature.”

The key themes of the overall design are exemplified by the roof systems. The house features a metal gable roof with a balcony at one end, echoing historic homes in the area. The 950-square-foot garden roof was installed over the master wing of the house, and the roof of the carport was constructed from solar panels.

“It’s a very green house,” Govan notes. “Solar panels over the carport take care of most of the energy needs of the home. The green roof replaces what was disturbed — the ground below — and brings it up. The green roof blends well with the landscape, and with it the house doesn’t seem as big.”

The green roof is visible from many parts of the house, including the roof deck, which is separated from it by a glass railing. “I love green roofs,” says Govan. “They replace habitat and make building softer. It’s alive. It’s so much more dynamic and rich than any other type of hardscape.”

Bob Wuopio is the owner of Form Design/Build LLC, headquartered in Raleigh, North Carolina. The company specializes in one-of-a-kind, complex projects, so this custom house was right up its alley. “We love unique projects,” Wuopio says. “Our preference is to make everything — the doorknobs, the pulls, the lights, the cabinets. We try to fabricate everything. That’s our niche.” 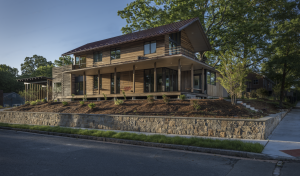 Located on a corner lot in the historic Cleveland-Holloway neighborhood, the modern home was designed to preserve two large trees and wrap around a courtyard to provide privacy. Photo: David Solow.

Numerous custom details throughout the house put the company to the test. For its relatively small footprint — 3,400 square feet — the house has its fair share of different roofing systems. “We have almost every type of roof system on that project,” says Wuopio. “We have a standing seam metal roof on the high gable. We have standing seam metal roof that becomes a metal wall. We have a built-up roof with a floating deck and a glass railing system. There is a green roof over a whole wing of the house.”

Getting the deck and green roof areas sloped perfectly was essential, and that begins with the substructure. “Getting a roof with a slope of 1/8 inch per foot right requires a pretty good framer,” Wuopio notes.

Form Design/Build served as the general contractor on the project, and Wuopio was responsible for scheduling multiple trades at the site. One key concern was making sure that the low-slope roof system wouldn’t be damaged after it was installed. “You don’t want anyone poking holes in it,” says Wuopio. “We spray foamed underneath the deck, so if you did have a small leak, you might not notice it for years, potentially.”

Wuopio knew the roof under the garden roof assembly was crucial. “I knew we needed a bulletproof roof, so I called Jim Pickard. He knew exactly what we needed.”

James Pickard III is the owner and president of Pickard Roofing Company Inc. in Durham, North Carolina. He represents the third generation of his family to run the business, which is more than 90 years old.

Pickard Roofing handles all types of commercial and residential projects, including historical restoration work. Most of the company’s projects are within 25 miles of the office, including this one, which was just two miles down the road.

Crews at the company don’t do as much hot-mop BUR work as they used to, but they still have that club in their bag for below-grade waterproofing projects and garden roof assemblies. For this green roof project, Pickard recommended a coal tar pitch roof system. “We use hot-mopped coal tar pitch in situations where the material is in constant contact with water because the pitch doesn’t degrade,” Pickard notes. “You don’t want to have to take the dirt off of a garden roof and start looking for leaks. You have to do everything you can to make sure nothing can cause problems.”

That includes making sure the deck is secured with screws and not nails, which can back out and damage the roof assembly. Gravel stops should either be copper or stainless steel so they won’t corrode. “The whole idea is permanence,” Pickard says.

The hot-mopped system manufactured by Durapax consists of four plies of tar-coated fiberglass felt, which were set in four layers of coal tar pitch. A fifth layer of pitch was added as a top coat.

Pickard Roofing also installed the metal roof system. Snap Lock panels were custom fabricated in the company’s metal shop from 24-gauge Kynar-coated steel from Firestone Building Products in a wine-red color chosen by the homeowner. A synthetic underlayment, Titanium PSU 30 from InterWrap, was applied to the wooden deck before the panels were secured in place.

“The great thing about the Snap Lock system is there is virtually no fastening through the face of the metal,” Pickard says. 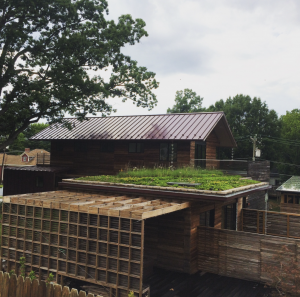 The 950-square-foot green roof covers one wing of the house. Pre-vegetated sedum mats were installed in most of the green roof area, and native plants are also featured in areas with more growing media. Photo: Living Roofs Inc.

“The panels are secured with cleats and clips in the seams.”

Snow guards from Berger Brothers were attached to the seams using non-penetrating screws. Half-round gutters were fabricated from the same metal as the roof and complemented with “rain chains” that serve as downspouts.

Many of the copper details and flashings were custom fabricated on site. “One of our strengths is in our flashing design,” notes Pickard. “The company has a lot of soldering irons. We still use a lot of the old techniques.”

“Everyone’s priority was on doing the job right,” Pickard says. “In this case, the emphasis was on the quality, not just the cost. The cost is important, don’t get me wrong, but in this case the budget was increased if there was a product that could do the job better. Ultimately, you have to put the quality where it counts, and that’s why this project worked out so well.”

Landscape architect Kathryn Blatt Ancaya co-founded Living Roofs Inc. in Asheville, North Carolina, along with her husband, Emilio Ancaya. The company handles all aspects of green roof and living wall projects, including design, installation and long-term maintenance. “Our work ranges from small residential projects to large complex commercial and institutional projects — and of course, everything in between,” she says.

These photos show the roof right after it was installed (left) and after three months of growth. Photos: Living Roofs Inc.

Living Roofs is a certified installer with garden roof system manufacturer Xero Flor America LLC, which is headquartered in Durham. Clayton Rugh, the director of Xero Flor, contacted the Ancayas after Trott and Govan toured the company’s own garden roof. They asked for help designing a version of the company’s lightweight extensive roof system for the project. As Rugh notes, “One of the benefits of the Xero Flor green roof system is its adaptability to nearly any roof situation — load limits down to 10 pounds per square foot, dynamic slope changes between zero and 45 degrees, and compatibility with most commercial waterproofing, including TPO, PVC, modified bitumen and asphaltic BUR assemblies.”

“We collaborated with the architect, Tina Govan, and Xero Flor to design an extensive pre-vegetated green roof with areas of deeper soil to support native grasses and perennials,” Ancaya explains.

The Living Roofs crew installed the Xero Flor XF300 green roof system with growing media depths ranging from 2.5 to 5 inches. After the root barrier was installed over the coal tar pitch roof, it was covered with a drain mat and filter fleece. The growing medium was then lifted into place using a telehandler.

Most of the garden roof area was overlaid with pre-vegetated Xero Flor sedum mats. Plugs of herbaceous plants were inserted in the deeper areas. “The grasses we used were grown by Hoffman Nursery, a local grower, and we used perennials by North Creek Nursery,” Ancaya notes.

The sedum mats are an attractive option because they are fully covered when they are installed, notes Ancaya. “Incorporating the areas of deeper soil also allowed us to create a more dramatic visual effect by contrasting the low-growing Xero Flor mats with taller and more textured plants,” she says.

The green roof installation took less than eight hours over the course of two days. “Kate is the design arm of Living Roofs, and Emilio is the installation arm, and the two of them teamed up on this project to knock it out of the park,” Rugh says.

Trott enjoyed watching the building process. “I learned a ton,” she says. “I just love watching craftsmen who are passionate about what they do. I had fun out there!”

The home was completed in the spring of 2017, and Trott is thrilled with the result. “It’s better than I even imagined it would be,” she says. “I love it, and my cats love it. In fact, I think they are pretty sure that I did all of this just to entertain them.”

In fact, Trott has become something of a residential green roof ambassador. “I’ve been spreading the word,” she says.