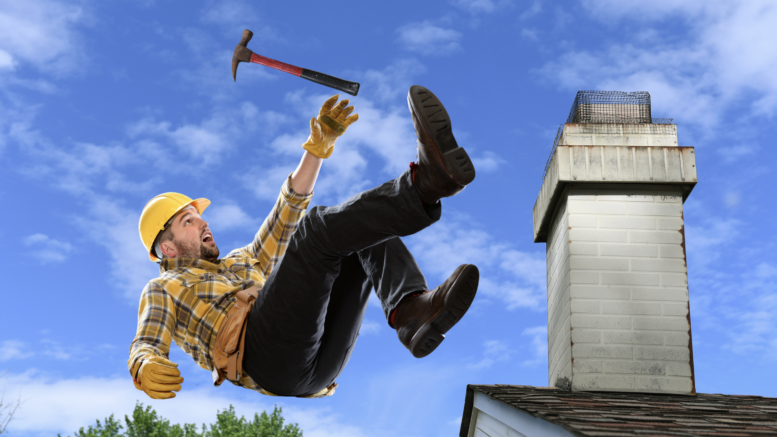 For those whose regular workplace is on a roof, one day can seem like the next. What the novice finds unnerving becomes routine as a roofer’s skills grow and the seasons whiz by. On many days there is pressure to get the job done quickly to increase profits or to lessen a backload of roof jobs on the schedule. In the real world, one delayed job impacts the next and soon the crew is working extra hours. Dusk is falling; additional workers are sent to the roof; tools are not properly stowed. And then it happens. Two roofers, each with years of experience, are working close together. One steps back abruptly and both fall. Their fall arrest equipment saves the day, but now it’s time to figure out what happened.

A lack of situational awareness is often cited as the cause or a contributing factor in construction industry accidents. Incident reports often contain phrases like “The worker was distracted by ….” or “The crew was packing up after working overtime …”. For each worker, whether on the roof or on the ground, situational awareness means keeping a 360-degree view of the workplace, understanding both inherent risks as well as immediate risks of the present job, and a clear anticipation of hazards that could cause an incident. While this sounds easy, in practice many factors can interfere with safety measures. Managers need to remember that attention is a limited resource while distraction on the job is ever present. Conversely, functional fixation is an equal threat; when workers concentrate so intensely on their own task they neglect to notice others working nearby or to identify approaching hazards such as a change in weather.

A team whose members are familiar with each other is ideal and has many advantages. But in today’s fast-paced construction/roofing environment, stable crews are often a luxury. New workers, particularly when brought into an existing project, can strive to impress by trying to work faster than others, or take on tasks they might not be truly qualified to perform. This behavior, a type of information overload, marks a loss of situational awareness because the new worker is unable to perceive the entire job and their effect on the safety of others.

Situational awareness is more than a brain game or tabletop exercise for training sessions. It takes continuous practice at the jobsite and requires both encouragement and vigilance by management. A site review should be part of regular training sessions and put in practice at morning jobsite meetings. Management must encourage a culture of safety that allows workers a clear path for reporting hazards and anticipated threats. Since complacency can lead to accidents, here are some tips to help keep situational awareness “top of mind” for each crew:

• START each day on every job by prompting crew members to be aware of their situation and hazards. Remind them to have a 360-degree focus both for themselves and for others on the project — both on the roof and on the ground. Emphasize teamwork.

• CHECK equipment and safety procedures. Review emergency protocols such as rapid rescue from a fall or fall arrest. Everyone needs to know where the medical kit and rescue equipment are kept. Who will call 911? On many crews this is the job of the crew leader; but what if he/she is the one injured?

• ASK what workers see that might be different from yesterday or could cause trouble today. Differences can be as routine as weather and temperature or as unique as a new piece of equipment being used on the project.

• ENCOURAGE workers to manage-up by bringing hazards to the attention of the job foreman. In return, give praise to workers who notice a hazard before it becomes a problem.

Many factors can and will have an effect on worker safety in general and situational awareness in particular. One factor often mentioned is fatigue. Concentration wanes after a few hours on the job — that’s pretty clear. But fatigue can also occur early in the shift if a worker has been kept awake all night by a sick child or by other worries. Proper rest periods are sometimes skipped or shortened on a fast-paced job. Workers fighting hunger or dehydration are unlikely to have the mental energy to keep a 360-degree view of the job.

After the real-life incident described above, the roofing contractor’s safety officer held a verbal debriefing with the crew involved. No one could point to a single cause for the accident that could have ended two roofing careers. That was to be expected since most serious incidents stem from more than one mistake or misstep. Here’s what they found:

1. The crew was feeling more rushed than usual that day. A delay in getting to the jobsite due to a traffic backup meant a late start. Additionally, they were under pressure to finish the roof that day. Work began without a morning meeting and no reminder to be 360-degree aware of your surroundings.

2. The day’s temps climbed to 94 degrees, generating a heat index above 80 degrees. This should have triggered more frequent shade and rest breaks for the crew. Few were taken and work pushed on into twilight.

3. One worker laid a hammer on the roof instead of putting it back on his belt, then turned away to set up the next part of his sector.

4. A second worker, new to the company and eager to be seen as super-productive, also lost sight of the full picture and turned his back to his teammate. He became so focused on the roof immediately in front of him, he did not realize he was about to collide with his partner.

The crew and the company learned from this close call that safety can never be taken for granted. An essential element of the learning process is to conduct after-incident debriefings as soon as possible and insist that they be judgment-free zones, creating a mechanism for an honest dialogue. Good situational awareness means never having to say, “What went wrong?”

About the author: Brandon Strawder is CEO of Strawder Family Innovations, manufacturer of The RidgePro, the premium device in steep-slope roofing safety. The company’s mission is to dramatically reduce the number of injuries and fatalities in the roofing industry. For more information, visit theridgepro.com.