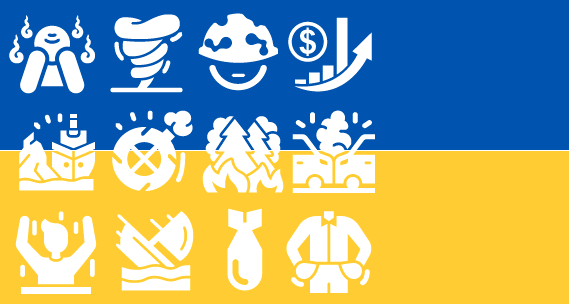 On February 24, 2022, just as the world was beginning to show signs of recovery from the COVID-19 pandemic, Russia invaded Ukraine in what Russian President Vladimir Putin referred to as a “special military operation.” In response to the ongoing escalation of the Russia-Ukraine conflict, the United States, European Union, United Kingdom, and other countries across the globe imposed a severe package of sanctions on Russia. The sanctions aim to target broad areas of the Russian economy, including bans on Russian imports, as well as high-profile political and military leaders in Russia and Belarus.

Those in the construction industry are all too familiar with the adverse effects that the pandemic had on the global supply chain. The price of lumber and other raw materials increased dramatically, and contractors faced uncontrollable delays due to the supply chain disruptions. Now, the Russia-Ukraine conflict and related sanctions are causing, and will continue to cause, renewed disruption to supply chains that will inevitably interfere with the construction industry across the country.

Russia and Ukraine are critical suppliers of oil and natural gas, metals, raw materials, chemical products, and machinery. Russia controls around 10% of global copper reserves and is a major producer of nickel, aluminum, and platinum. Russia also supplies 30% of Europe’s oil and 35% of its natural gas. Ukraine is one of Europe’s top producers of uranium, titanium, manganese, iron and mercury ores, and has the third largest shale gas reserves in Europe. In anticipation of access to and production of these materials being hindered, prices are already increasing, and the market is being forced to look to other countries and alternative supply chains.

As the Russia-Ukraine conflict unfolds, the renewed disruptions to the global supply chain are having serious adverse effects on parties’ legal obligations under construction contracts and are drastically altering the commercial characteristics of pre-existing contracts. Uncertainty relating to those contractual obligations is likely to lead to legal disputes.

When determining potential exposure under contracts currently in effect or prospectively abating future liability, contractors should consider the following legal principles and defenses.

Force majeure clauses set forth certain conditions under which a party is permitted to extend, suspend, or terminate a contract as a result of unexpected and unavoidable events. Under United States common and civil law, force majeure protection generally extends to “acts of war,” and excuses performance from a contract without liability. Even if not expressly included in a force majeure provision, the conflict in Ukraine is likely to meet the threshold test of whether performance obligations are excused. However, that fact that force majeure language exists in a contract may not necessarily be sufficient to excuse non-performance.

A party considering relying on a force majeure clause will need to demonstrate that the relevant events are the effective cause of non-performance. Reliance on a force majeure clause to excuse non-performance is more likely to succeed when the contract has a direct connection to Russia or Ukraine — where performance is more likely to be affected by the conflict — but ultimately will depend upon the causal relationship between the events and obligations in question.

Whether governmental sanctions imposed in response to Russian aggression in Ukraine would be considered a consequence of an act of war depends on the terms of the contract in question. In many contracts, well-written force majeure provisions contain a reference to governmental action which would certainly encompass government-imposed sanctions. Regardless, the same causal analysis is required.

Because force majeure is a contractual tool, it will often require strict compliance with contractual requirements, including notice and timing provisions. Unless the contract provides otherwise, a force majeure clause will usually only excuse or suspend performance and, once the event in questions abates, the contract will continue in effect.

Whether a particular contract contains an event or delay price escalation clause, or a percent-change price escalation clause depends upon the interpretation of the specific contractual language. Regardless, however, of the type of price escalation clause, contractors will be able to determine which party bears the costs of increases in material costs caused by the Russia-Ukraine conflict and its impact on the global supply chain. For contracts that have not yet been executed, at the time of proposal and contract negotiations, contractors should identify materials with price volatility concerns, consider the timing of procurement, and account for those concerns in their contracts with the owner, subcontractors, and suppliers. Where possible, all parties should agree upon the circumstances in which the right to a price adjustment will exist.

Frustration of Purpose and Supervening Illegality

Frustration of purpose is a legal doctrine that arises where a contractual obligation has become incapable of being performed because the circumstances in which performance is called for would make the transaction fundamentally different than that which was undertaken by the contract. Where frustration of purpose applies, the parties’ obligations are discharged entirely.

For frustration of purpose to apply to discharge performance, the relevant event will usually need to lead to a drastic change in the nature of the relevant obligation being performed. Frustration of purpose does not apply where there is merely a change to the commercial consequences or intent of the transaction. Similarly, an event which merely makes performance of the contract more burdensome or commercially unfavorable may not be sufficient.

Supervening illegality of performance will frequently operate to discharge a contract and arises in scenarios in which the performance of the contract is barred by operation of law. For example, the sanctions imposed on Russia by the United States and other countries may interfere with the performance of a contract due to the prohibition on trade and the inability to import materials or supplies needed for completion of a project. Application of the supervening illegality analysis could become difficult where the illegality arises under laws of a third country — such as the European Union or United Kingdom — which may cause conflicts where the sanctions of various countries do not align. Nevertheless, illegality under the laws of a third country will typically render contract performance impossible or fundamentally different such that the purpose of the contract is frustrated, and performance will be discharged.

The foregoing legal principles are complex and require strict application to the facts of each particular dispute. Contractors should seek legal advice to review the specific terms of contracts currently in effect, prepare for potential legal disputes that may arise as a result of the Russia-Ukraine conflict, and revise or draft contracts not currently in effect to better protect themselves from liabilities that may arise due to the conflict.

About the author:Keith A. Boyette is an attorney with Anderson Jones, PLLC, a construction law firm located in Raleigh, North Carolina, with attorneys licensed in North Carolina, South Carolina, and Georgia. He assists clients throughout the litigation process, from pre-filing advice to mediation, settlement negotiations and trial. For more information or questions about this article, please email him at kboyette@andersonandjones.com.