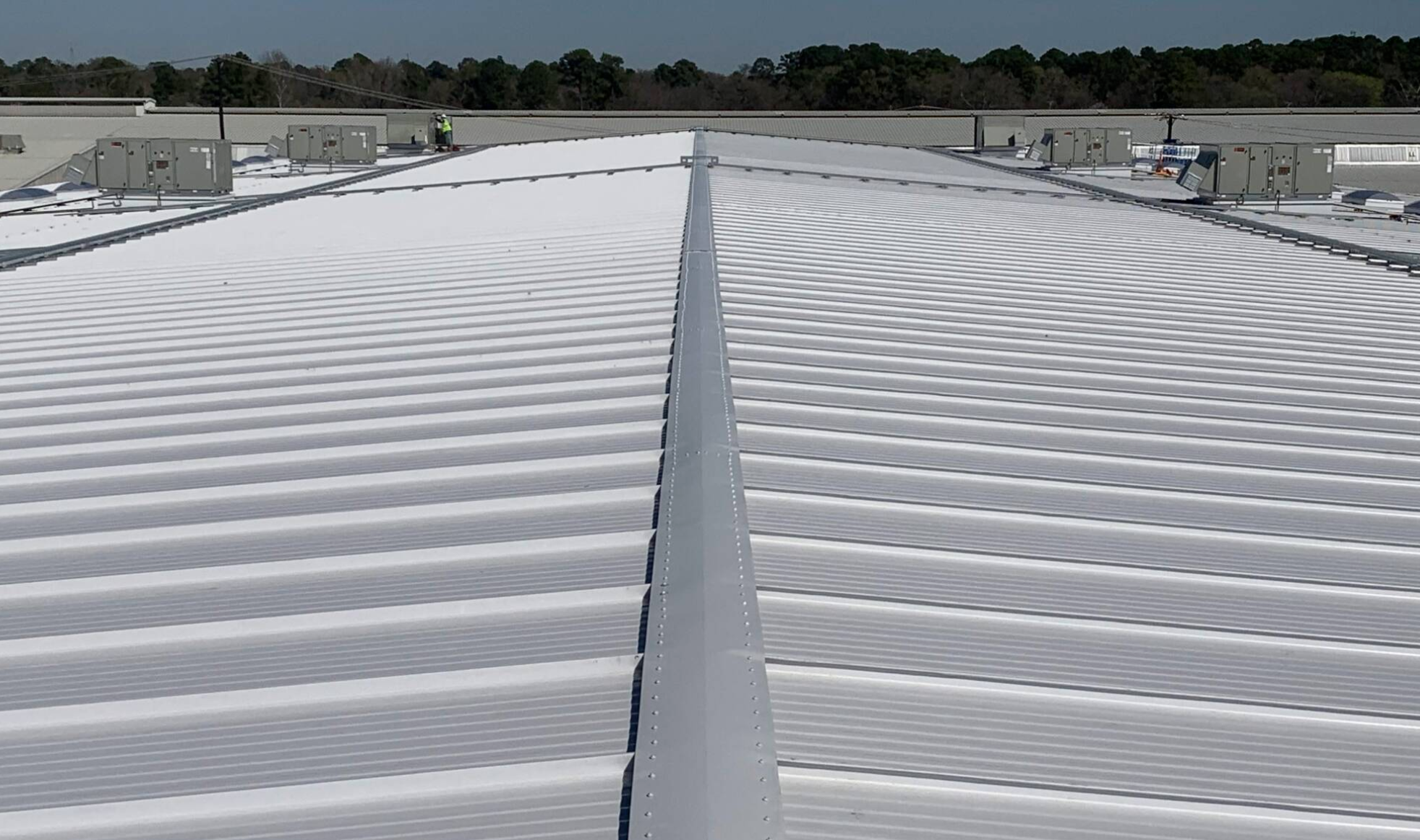 When a warehouse at the Komatsu manufacturing complex in Longview, Texas, sustained extensive tornado damage, the company decided to build a new, state-of-the-art warehouse in its place.

Komatsu turned to a trusted business partner, Transet Co., a Longview-based design-build contractor, to demolish the old structure and construct its 81,438-square-foot replacement. The new warehouse features insulated metal panels (IMPs) from Metl-Span in both the roof and wall systems, as well as a permanent rooftop walkway system from LMCurbs, which was installed to facilitate ongoing maintenance of the rooftop HVAC units.

According to Dale Pickard, project manager for Transet Co., the IMPs not only made for smooth construction, but they helped the warehouse meet building envelope energy requirements.

Challenges on the project included a tight schedule, unseasonably rainy weather and accommodating nearby manufacturing facilities that were continuously operational.

The scope of work included the removal of the previous structure and subgrade remediation. After the footings and slab were in place, the Pre-Engineered Metal Building (PEMB) was erected. The system was supplied by Houston-based Mid-West Steel Building Co. and erected by Cannon Steel Erection Co., located in Tyler, Texas.

After the metal frame and roof purlins were in place, Cannon Steel Erection installed the IMPs to complete the wall and roof systems. “You basically go in sequence from left to right with the IMP roofing panels,” Pickard explains. “You just start at one end, work to the other end, and then come back and install the panels on the other side. It’s basically a straight line process from one end to the other.”

The roofing panels were 42 inches wide and 4 1/2 inches thick and incorporated a standing seam. “The panels attach at the purlin with a concealed fastener clip,” says Pickard. “The IMP has a finished skin on the upper and lower sides.”

The seams were hand crimped and then mechanically seamed. At the eave, a gutter system was installed after the roof and wall panels were tied in together.

Workers on the roof were tied off with personal fall arrest systems and retractable lifelines attached to non-penetrating temporary anchor points. “All facets of construction safety were of paramount importance to Transet Co.,” Pickard states. “Safety was and is the first order of business for everybody.”

The walkway was installed after all of the HVAC equipment was in place and the roof system was completed. The LMCurbs Roofwalk System was designed to provide a safe way to access HVAC equipment while protecting the roof. “It’s basically a roof access area for the maintenance personnel to enter,” Pickard says. “It’s a railed walkway gated at one corner of the building for access, and it goes to each one of the rooftop units (RTUs). In all, there is more than 1,400 linear feet of walkway.”

The system was mounted using S-5! H90 clamps. “There were no penetrations in the roof,” Pickard points out. “It’s a durable system that will protect the owner’s investment in the roof.”

According to Aaron Combs, product manager at LMCurbs, the project was one of the first to use the company’s redesigned LMCurbs Roofwalk System with upgraded handrails. “It was designed to be both a better looking, more professional end product for the building owner, and a more user-friendly system for the installers in the field,” Combs says. “The new handrail assembly utilizes Speed-Rail fitting by Hollaender and is now down to four pieces — from 28— so the number of man-hours needed to install the system is drastically reduced. It also streamlined the warehousing and distribution process because the redesigned support plates eliminated multiple manufacturing processes. With this redesign and stackable plates, we are able to maintain better stocking levels and provide our customers with a faster shipping timeframe.”

Field installations often present unique and unforeseen obstacles. On this project, when the location of some HVAC units was adjusted from the initial layout, Combs was ready to help ensure the walkway would be installed correctly. “We are always available to offer advice and technical support, and that can be especially important with a first-time installer,” Combs says. “They can contact us any time and we can help walk them through it and assist with any issues that might arise.”

Work began in April 2019 and wrapped up February 2020. “We had a wet start, which made soil remediation difficult,” notes Pickard. “In the latter part of our project, we had an extremely wet January and February, and that presented challenges in erection and finish out. Despite the bad weather, the building came together ahead of schedule.”

Coordinating all phases of the project at an active manufacturing campus also posed some logistical hurdles. “The existing plant, of course, was in operation the entire time,” recalls Pickard. “The site where the new warehouse was being built was where the old warehouse facility was, and the existing loading dock had to remain in operation until they were in the new building. That encroached on the footprint of the new facility.”

Final touches included new loading docks, interior offices and restrooms. “This project shows our ability to deliver an outcome that meets the client’s needs from design to finished product — safely, under budget, and ahead of schedule,” notes Pickard.

“It demonstrates our ability to provide a first-class warehouse facility for the owner. We’ve been doing it a long time. Our company has been in business for 38 years. We are a safety-oriented company with vast experience in most phases of commercial, industrial, and institutional construction, and we are there for our customers.”