Recent code and standard development has resulted in increased thermal insulation. This increase has required greater and greater insulation thicknesses, which are even thicker when
tapered insulation is added. This roof system thickness, especially in reroofing design, has thrown a curveball to many designers: How should they address existing rooftop conditions? 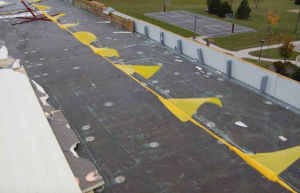 Photo 1: On a recent project in which the roof sustained a wind event, investigation for the design of the new roof edge and system found multiple concerns: open metal stud cavities to the parapet, open metal panel joints, wood and substrate boards attached with drywall wall screws and moisture drive concerns. This information led to the design of one of the author’s most complicated roof edges (see Figure 1).

I have successfully dealt with this for more than three decades and mostly with ease. However, based on the fight being put up by the Chicago Roofing Contractors Association (CRCA), you would think it is putting contractors out of business rather than having the potential to increase their bottom lines.

Consequently, this will be the first of several articles discussing how designers can deal with existing conditions on the roof when increased thermal values are required. This article will explain the roof edge—the first defense against wind uplift and often an aesthetic concern. Future topics will include drains, roof curbs, access doors, windows, RTUs and plumbing vents.

Twenty-five or 30 years ago, insulation was what you placed on the roof deck to act as a separator between the roof cover and roof deck, especially with the increased use of fluted steel decks instead of monolithic-type decks, like concrete, gypsum, wood and cementitious wood fiber. Prior to that, roof covers were often placed directly on these monolithic roof decks sans insulation. 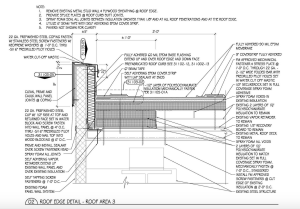 Figure 1: On a recent project in which the roof sustained a wind event, investigation for the design of the new roof edge and system found multiple concerns: open metal stud cavities to the parapet, open metal panel joints, wood and substrate boards attached with drywall wall screws and moisture drive concerns. This information led to the design of one of the author’s most complicated roof edges (see Photo 1).

It has only been within the last 25 to 30 years that insulation has become an integral component of the roof system, often changing how the roof cover behaved. As energy and the conservation of energy became vogue, codes and standards became more stringent in regard to thermal insulation values. With the increase in R-value came an increase in the thickness of insulation. This in turn requires roof edges be higher to accommodate the increases in insulation, ultimately changing how the roof edge on buildings without parapets are designed. 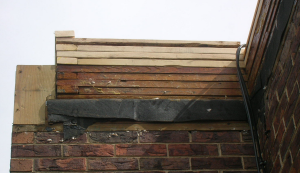 Photo 2: Stacking wood to raise the roof edge is old school. Here you can see the new wood blocking is the second stacking over previously installed wood on a previous reroof.

The use of tapered insulation with thicknesses often above 12 inches changed how the roof edge is treated, especially in reroofing situations, which has resulted in design challenges. Add to this, modern building design that forewent parapets for gravel stop; the challenge of raising the roof edge to accommodate new insulation heights has dramatically increased.

The Washington, D.C.-based American Institute of Architects has issued a challenge to the design community to make all new construction Zero Energy Buildings (buildings that produce as much energy as they use) by 2030. Intuitively, more insulation (and perhaps fewer windows) will result in a building that uses less energy and, thus, more easily achieves a balance point. 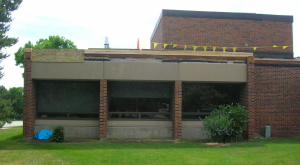 Photo 3: To strengthen the multiple stacks of 2xs, 3/4-inch plywood is being added on the exterior.

This altruistic, far-reaching goal is being fought. CRCA, for example, is fighting the new code increases in roof insulation. Although the organization states a variety of reasons, it appears that the fear of owners delaying work that costs more because of increased insulation thickness is the greatest concern. This is interesting because design—by state mandate—is the purvey of licensed design professionals. Is the CRCA advocating design by non-licensed designers? I believe the CRCA’s position is foolish. Why would a predominately union-based contractor organization fight a code mandate that allows their members to increase profits? Perhaps the challenge by “right to work contractors” is greater than believed.

CONCERNS: LEGITIMATE OR NOT

There are a number of concerns, or design challenges, as I like to say, to raising the roof edge. For us architects, respecting the architect’s vision and design intent is often in conflict with what may need to be accomplished. I have worked with clients in buildings of note, designed by well-known architects, and have been able to respect every detail of the roof-edge vision. It is very difficult and challenging. 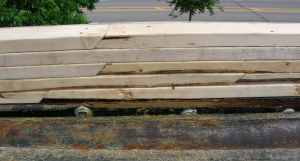 Photo 4: When stacking, wood joints should be offset and scarfed at 45 degrees.

Another concern can be cost. Historically, a dimensional 2x was set at the roof edge and nailed; now we often raise the roof edge with prefabricated insulated curbs. Costs are always a concern but when budgeted correctly and the client is informed during the process, the project has always been realized within a year or two.

Another concern I often hear voiced is, “It’s difficult” or “I cannot figure it out”. When one considers that the roof edge must be (let’s say should be) tied to the building structure to resist wind loads, these are true concerns. These types of conditions often call on years of experience. Therefore, I say the challenge is on! 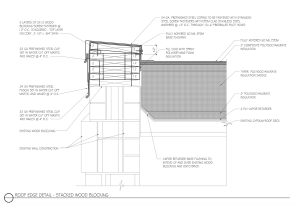 Figure 2: On this detail from an older project, the roof edge is being raised with multiple layers of 2 by 12s—a bit old school but easily performed. It is recommended to not specify preservative- treated wood, coated screws and off-set joints.