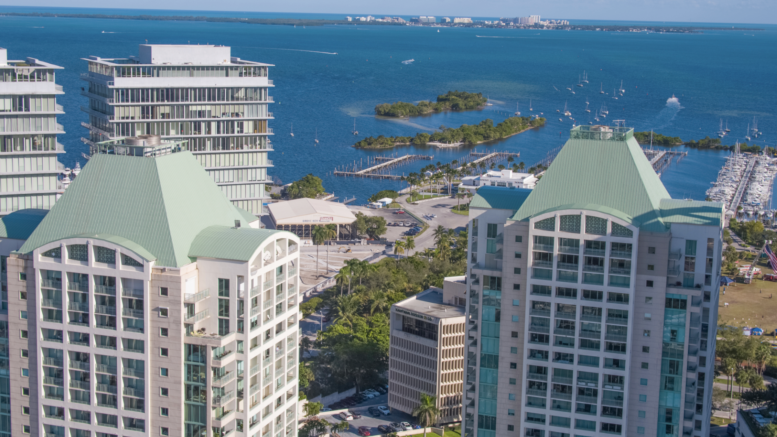 Sometimes re-roofing projects are pretty straightforward. Others can present a complex puzzle. Sometimes looking at things in a different light can lead to an unexpected solution that proves more cost-effective and less intrusive for the building and its occupants.

The Ritz-Carlton Coconut Grove in Miami, Florida, serves as an excellent example. The hotel consists of two 26-story towers, and each was topped with a standing-seam metal roof, with steep sections transitioning to sloped roof sections at their base.

When the original standing seam roof reached the end of its service life, the owners solicited bids to replace it with a new standing-seam metal roof. The installation would require large construction cranes to be mounted near the entrance of the property.

Bill Devine, area manager for Coatings Application & Waterproofing Co., was convinced a new metal roof was not the answer. He proposed installing the Sarnafil Décor PVC system as an alternative, asserting it would be more cost-effective, more durable and less invasive to the hotel owners and guests.

Devine’s intimate knowledge of the jobsite helped him craft his plan. “We had an existing relationship at the Ritz,” he explains. “We went in about nine years before that to repair the metal roof that was up there. We patched it after some storms and painted it for them. We’ve helped them out with some other stuff over the years, and the consultants came in to talk to them about taking the metal roof off and putting a new metal roof back on it. That’s when I got involved to try to convince them otherwise.”

There were several key factors influencing Devine’s recommendation, including the harsh, corrosive oceanside environment, which is tough on metal. “I convinced them to use the Sarnafil PVC Decor Rib System, which has the appearance of a standing seam metal roof,” Devine says. “The average person who looks at it doesn’t know it’s not a metal roof, but it’s all PVC. The way I designed it, there is not one piece of exposed metal that can rust anymore.”

With the PVC system, all the roofing materials could be brought up using the service elevators, eliminating the need for a crane. To top it off, it would be less expensive than a new metal roof.

“What got us the job was when I gave him my price for the Sarnafil and told him I wouldn’t have to have a 200-300 foot crane sitting in front of the Ritz Carlton for eight months,” notes Devine. “I took the entire roof off and put the whole new roof on using the service elevator.”

A detailed safety plan was paramount. Crew members had to be tied off 100 percent of the time, and all tools were tethered. Anchor points were attached to the building’s heavy-duty steel framing at the top of the towers. “We drilled through that and put anchors through those big beams and ran our safety lines and swing stages through that,” says Devine.

The plan was to take everything up through the roof hatches, including the swing stages, which were engineered to fold up for transport. Debris was taken out the same way.

Logistics at the jobsite were very tight. “The property doesn’t really have a parking lot area — it has a parking garage — so we had no place to put dumpsters. We just had a few spots down in the parking lot to stack insulation and rolls, and we took material up the freight elevator whenever we were ready for it.”

Recycled metal and debris were also taken out via the freight elevator. “We brought it down on a Friday, and we had a guy with a truck who would meet us at the loading dock. We’d load all of the trash in his truck and he’d take it to the dump,” Devine says. “There was nothing easy about it.”

As the metal roof was torn off in sections, roof areas were covered with 1.5-inch isocyanurate insulation with quarter-inch DensDeck bonded to it with adhesive. The pre-assembled 4-foot-by-4-foot boards caused some difficulties. “We had to make modifications to the swing stage so they could stack insulation on it,” notes Devine. “We dropped all of the trash down through the roof hatch, but when we went to pull our insulation up, it wouldn’t fit through the roof hatch. We cut a 5-foot-by-1-foot hole in the roof deck on each side of the building and had the guys hand the insulation up through the slot in the roof deck. They’d stack it on the stage, take it up and start installing it.”

The insulation panels were fastened to the 20-gauge steel decking with 3-inch #15 screws and insulation plates, and a Sarnafil vapor barrier membrane was installed. The slots cut in the deck were repaired using flat-stock steel.

The Patina Green PVC membrane was adhered using Sarnacol 2170 adhesive. Crews on the swing stages worked from top to bottom, adhering about 2 feet at a time. “When they got to the bottom, then they would go back up to the top with welders and weld the laps,” Devine explains.

Applying the Decor ribs with a hot-air welder was the last part of the process. The swing stages had to be modified for this step as well. “We had to be held off far enough that we could run our welder and still keep it in a straight line,” Devine recalls. “It was a fun one.”

Work on the project included the internal gutter systems and mechanical areas. “Each corner has an internal gutter that extends 15 feet down one side and 15 feet down the other. Those were completely shot,” says Devine. “The only thing that saved them was the concrete underneath. Everything above was shot. We had to put tapered insulation and the Sarnafil membrane in those and put new drains in.”

There was no exposed metal on the project, according to Devine. The hips and ridges were made from SarnaClad Patina Green metal, which is wrapped in PVC, and the metal framing was also wrapped with PVC membrane.

Work on the project began in February 2019 and was completed in November 2019, ahead of schedule. The project received the Sarnafil Project of the Year award for 2019. “Winning that award is a pretty good feeling,” says Devine. “We went through a lot, and Sarnafil was there to help us out.”

Detailed planning was crucial to the project’s success. “I had the luxury of plenty of time to think about all of the different things we were going to have to do,” Devine notes. “We had to make some changes out in the field, like cutting a hole in the deck, but most of it went pretty smoothly.”

Devine credits CAW’s experienced team for the success of the project. “I had a good crew,” he says, “Our foreman, Bob Hinojosa, he’s been with me for 30 years, and he is just good.”

According to Devine, this project demonstrates CAW’s ability to execute difficult projects. “We find the best way to do it,” Devine says.