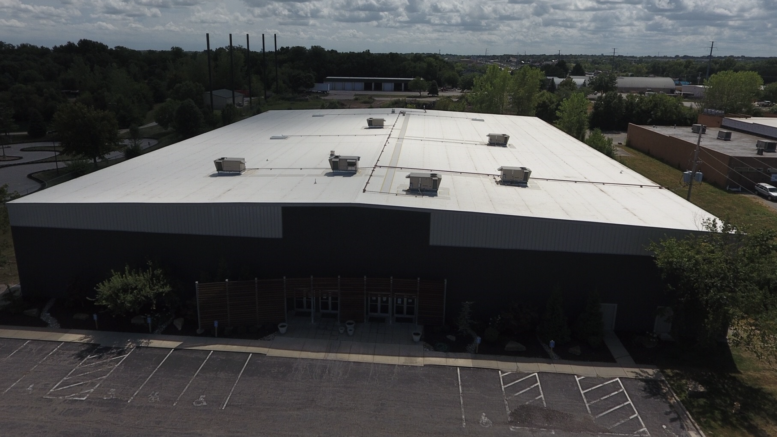 While metal rooftops provide a unique aesthetic appeal for many buildings, that appeal is significantly diminished when the rooftop begins to rust and leak. That is exactly what happened to Lakeland Community Church in Lee’s Summit, Missouri, in January 2020. Originally installed more than 20 years ago, this metal rooftop had weathered numerous hailstorms and finally reached the end of its service life.

The church had the choice of installing a new metal roofing system or retrofitting the existing system with a different type of roofing material. After consideration, they chose to retrofit the existing system — partly because this would enable them to create a more energy-efficient rooftop and partly because the roofing installation had to be completed during the winter months, which meant that only certain cold-resistant materials could be utilized.

One of the most energy-efficient options for retrofitting this metal rooftop would be to install a fully adhered single-ply membrane system, but the use of adhesives in cold temperatures would almost be impossible and at least cause significant performance issues. The church needed a single-ply solution that would provide the performance of a fully-adhered membrane without the use of adhesives. Enter Versico’s VersiFleece RapidLock (RL) TPO roofing system. This unique system would provide the energy efficiency and wind-speed performance of a fully adhered system without the use of adhesives. Instead of adhesives, Versico’s RL system utilizes VELCRO Brand Securable Solutions to attach 115-mil VersiFleece roofing membrane to the underlying rooftop. The team at Lakeland Community Church determined this would be the best solution for their wintertime retrofit.

In addition to facilitating the wintertime installation and providing excellent wind-uplift performance, the VersiFleece RL TPO roofing system would also provide long-term durability and resistance to hail and punctures. This added durability was incredibly important given Missouri’s frequent hailstorms and the previous rooftop’s struggle against those elements.

This retrofit installation was completed by local contractor RJM Roofing. The team from RJM Roofing began this 60,000-square-foot installation by placing a layer of Versico’s expanded polystyrene (EPS) flute-fill insulation on top of the existing metal roof. This layer of insulation was especially designed to fit securely into the grooves of the metal rooftop for optimal energy efficiency. This first layer of insulation was followed by a half-inch layer of Versico’s SecurShield RL insulation, further increasing the rooftop’s thermal efficiency.

Both layers of insulation were mechanically fastened to the roof deck. With an R-value of 5.7 per inch, SecurShield RL consists of a polyiso foam core bonded on both sides to coated glass facers, which means that it not only increases energy efficiency but also provides a high compressive strength, protecting the building even further from potentially damaging weather conditions.

The final component to this metal retrofit was the VersiFleece RL TPO membrane, which was rolled out on top of the SecurShield RL insulation and secured using VELCRO brand attachments. With the additional security of this membrane attachment, the entire rooftop qualified for Versico’s 20-year total system warranty with additional coverage of windspeeds up to 75 miles per hour.

With Versico’s VersiFleece RL TPO roofing system, the Lakeland Community Church found a solution for their leaking metal rooftop that increased their building’s energy efficiency, decreased the potential for future rooftop damage and leakage, and provided additional security against hail and high wind speeds. This unique system provided the additional benefi t of allowing for cold temperature installation, which enabled the retrofit to be completed two months earlier than it would have been with the use of a traditionally adhered roofing system.

Systems like Versico’s VersiFleece RL are not only providing high performance on the rooftop, they are also enabling building owners and contractors to complete projects more efficiently without the interruption of delays often caused by cold temperatures — and that’s a win all the way around.