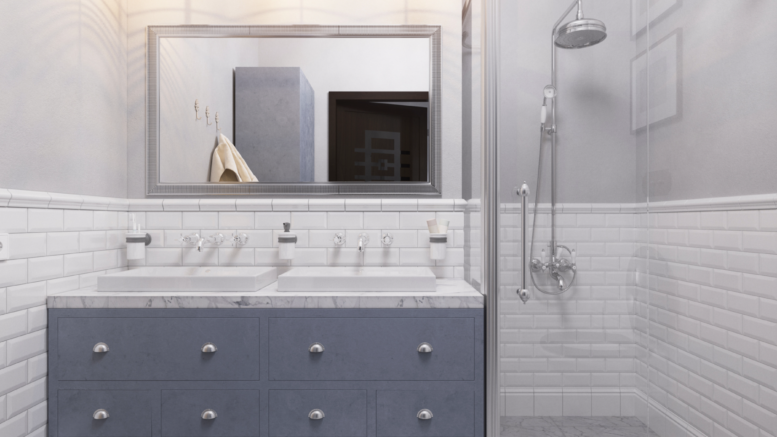 Every time we take a shower, it generates water vapor. The longer the shower, the more water vapor. It’s the job of the bathroom exhaust fan to remove that moisture properly to the outdoors through the ductwork from the fan. Home inspector Barry Sigler, owner of Barry Sigler Inspections, headquartered in Canton, Ohio, wrote to us suggesting a podcast topic focused on common mistakes with bathroom fan ductwork. This article is extracted from that podcast interview.

“I wrote to you because I get a lot of pushback from homeowners, realtors, builders, and electricians when I point out that the bathroom venting is incorrect,” Sigler says. “I thought a podcast on the topic would be helpful to everyone.”

What Does Code Say?

Chapter 15 of the 2021 International Residential Building Code (the IRC is reviewed and released for updates every three years) discusses bathroom exhaust fans. In part it states: “The air removed by every mechanical exhaust system shall be discharged to the outdoors … . Air shall not be exhausted into an attic, soffit, ridge vent or crawl space.” It’s always a good idea to also check local building code and the local building department.

When the ductwork from the bathroom exhaust fan terminates in the attic — instead of the outdoors as code states — it brings excessive moisture into the attic that could cause problems. Although attic ventilation is designed to help fight moisture buildup (as well as heat buildup), this amount of moisture is just too much.

“I often see a crusty layer on top of the insulation which indicates it has been wet a lot – and maybe dry when I see it,” Sigler continues. “But if I put my hand through it, it’s almost a totally different color underneath the layer of crust. It’s actually compacting the insulation to a degree and making it less effective.”

Sigler says a fully operational and balanced attic ventilation system of intake and exhaust vents is no match for this excess moisture. “That’s usually what I see. The moisture is too much for the attic vents to handle,” he notes. “It often can lead to mold growth as a result. I’ve seen every piece of wood inside the attic black. That’s not good.”

No, it’s not. At the minimum it’s unsightly. But even worse it could affect the indoor air quality inside the living space.

Bathroom fan ductwork should not be attached to or run into an attic exhaust vent. Correct installation of bathroom fan ductwork includes attaching it to a vent hood, which is designed with a damper. The damper allows the moist air to exit the ductwork through the vent hood without back drafting back through the ductwork that was originally carrying the moisture. Attic exhaust vents such as ridge vents and individual box vents (also called pot vents, turtle vents, and roof louvers) do not have dampers. And if they do, the manufacturer would list that feature.

Mistake 3: Ductwork Running Into the Soffit.

Another very common mistake is running the ductwork to or through the soffit. The soffit is the location of attic intake vents, which allow incoming air into the attic to help vent the overall attic. If we’re dumping bathroom shower moisture directly near an attic intake vent, that moisture could very well be pulled into the attic — the exact place we don’t want it.

“This, to me, is the most problematic in that most people understand why the first two mistakes are wrong once those mistakes are pointed out and explained,” Sigler says. “But this particular mistake, once I flag it during my inspections, is challenged frequently. Sadly, even to this day, builders are building homes with the bathroom fan ductwork running out to or through the soffit. It’s incorrect.”

These types of problems are often identified when a home is being sold. “In the process of the transaction of someone buying a home, no one wants to hear about these mistakes, and no one wants to have to fix these mistakes,” Sigler says. “For example, I had a seller who was an engineer who had the bathroom ductwork running to the soffit. He was really struggling to agree with me that it was wrong and needed to be fixed.” In the end, it was fixed.

“Sellers and realtors are often frustrated when I point out the incorrect bathroom ventilation, sometimes pointing to the fact that the builder built the house this way so it must be correct. But I explain why it is not correct,” Sigler says. “To me, it’s not rocket science. If you’re trying to remove warm, moist air out of the bathroom to the outdoors, these mistakes we reviewed are clearly a problem. That’s what I try to explain to all parties during a home inspection.”

Sigler has been inside enough attics to caution folks of what can go wrong if it’s not fixed. And even if the buyer is willing to purchase the house from the seller with the mistake, one day that new buyer may be selling the house. Will the cycle of mistakes continue?

“Ideally, homes would not be built with these bathroom exhaust ventilation mistakes,” Sigler says. And if they are, Sigler says it’s better to fix the mistakes sooner rather than later to minimize the problems and to stop the cycle from continuing.

About the author: Paul Scelsi is marketing communications manager at Air Vent and leader of its Attic Ventilation: Ask the Expert seminars (airvent.com). He’s also the chairman of the Asphalt Roofing Manufacturers Association Ventilation Task Force. He has written multiple books including Grab and Hold Their Attention: Creating and Delivering Presentations that Move Your Audience to Action.

Paul Scelsi is marketing communications manager at Air Vent Inc. and the leader of its Attic Ventilation: Ask the Expert seminars for residential roofing professionals. He also is chairman of the Asphalt Roofing Manufacturers Association Ventilation Task Force.

Be the first to comment on "A Word of Caution About Bathroom Ventilation: Is Moisture Being Properly Exhausted to the Outdoors?"