Kennesaw, Ga.-based Jasper Contractors Inc. representatives believe it’s important to give back to those who serve in our military. As such, the firm joined the Owens Corning Roof Deployment Project. Toledo, Ohio-based Owens Corning began partnering with Support Our Troops, Daytona Beach, Fla., in March. Via the project, military families in need can apply to have a roof installed at no cost to them by an Owens Corning Platinum Preferred Roofing Contractor, such as Jasper Contractors. 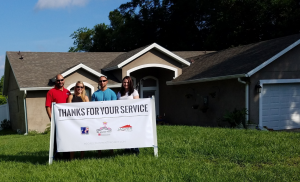 Owens Corning worked with Support Our Troops to locate Paul and Colette Singrossi, who have three children and live within Jasper Contractors’ Florida service area. Paul, an E6 staff sergeant, has served 16 years in the U.S. Army and recently returned home to Winter Springs, Fla., from a deployment in Africa. Paul and Colette both are police officers in their community.

The Singrossis’ existing roof was 11-years old and consisted of a lot of patchwork that was performed to pass inspection when the Singrossis purchased their home. While Paul was in and out of the country, roof repairs were neglected and leaks began appearing and worsening.

Carl McNair, president of Jasper Contractors, is happy to help the Singrossi family: “This gave us the opportunity to provide just a small piece of relief to one of our most treasured veterans. Mr. and Mrs. Singrossi have done a wonderful service to our country, so it was a small gesture on our part to provide them with a new roof.”

The new roof alleviates the Singrossis’ worries. “There was water seeping through [the roof] so it’s really nice to have peace of mind that we don’t have to worry about trying to find the money for that,” Colette says.

Paul adds: “[Service members] have to come back and reintegrate into society, so there’s not a lot of time to look for things that help us out. It’s nice to have the support to know that what we do is actually cared about.”