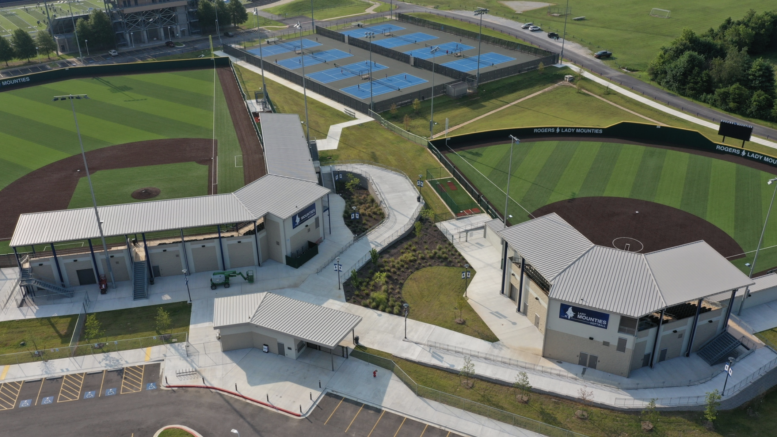 An ambitious new construction project called for a new competitive gym and baseball/softball complex for Rogers High School in Rogers, Arkansas. The two venues would call for multiple scopes of work including metal and TPO roofing, as well as a variety of wall panels. Franklin and Son Roofing was perfect for the job, according to Mike Ash, project manager and estimator with the Farmington, Arkansas-based company.

Franklin and Son has been in business since 1973, doing all types of commercial roofing and wall panels. “Roofing is our predominant area, but metal panels are also a specialty,” says Ash. “We also take on terra cotta panels, concrete wall panels, ornamental panels. We’ve done some really great projects.”

Franklin and Son began work at both projects at the same time. A metal crew tackled the baseball complex while a roofing crew worked on the gym. They were treated like two distinct projects. “Each phase had a separate foreman,” Ash notes. “The ball fields had a foreman, because that was all metal roof, and then the competitive gym had a roofing foreman, and a metal wall foreman.”

Work on the projects moved along concurrently. “As they started moving dirt and erecting the red iron, we started getting ready for the baseball filed,” Ash recalls. “At the same time, they were building the gymnasium. Once they installed the steel deck, the framers got started on the parapet walls and we started laying roof behind them.”

The baseball and softball diamonds were set up back-to-back with a shared concession area and ticket booth. The metal roof system covers the grandstands and dugouts, as well as the concession stand. All areas featured the same panel — Petersen’s PAC-CLAD Tite-Loc Plus in Granite. The metal panels were installed over the iron framing for the grandstands. Panels were rolled and delivered to the site by Petersen and installed using a clip system.

The dugouts had plywood decking, so ice and water shield was installed before the panels were applied. The roof on the concession stand included insulation, ice and water shield, and metal panels, which were complemented by soffits made from PAC-Clad Flush panels. Franklin and Son’s sheet metal department fabricated gutters, downspouts and trim.

Safety was a key part of the planning process. “The major safety concern was installing the metal roof panels over the red iron structure,” says Ash. Crew members used Guardian personal fall arrest systems with retractable lanyards tied off to anchor points installed in the framing. They also installed the panels using a boom lift.

“We used the boom lifts on the back side,” Ash notes. “One of the restraints on this project was the time it took to get the artificial turf in. They put the field in first, so we were not able to get around to the front. We were able to put a scissor lift in the stands because those were made of concrete, so we could lift up to the peak from there.”

The centerpiece of the new competitive gym is a basketball arena that seats 2,300 people that was designed to host the state tournament. The building is clad in a variety of wall panels. “The wall systems give the building a very modern look, with different styles,” says Ash.

Once the steel decking was installed and work began on the parapet walls, the roofing crew get started. “The framer was able to stay in front of us as we installed the roof,” Ash says. “It made for a very nice sequence of events.”

Crews mechanically attached R-30 polyiso insulation and Firestone’s HD cover board, which was topped with Firestone’s 60-mil white self-adhered TPO. “The installation was pretty straightforward,” notes Ash. “We flashed the roof curbs in advance. The roof was so big, and they brought all of the HVAC units at one time. By flashing the curbs, we were able to let them set the units, and then when we laid out our roof, there was no one else on it, so there were no worries about damage from HVAC crews.”

The parapet wall was framed in steel studs and insulated before it was flashed. “We flashed the walls following the Firestone details,” Ash says. “We took the membrane up the wall and over the edge. The parapet cap was the last step.”

The Citadel 2000 ACM system was installed both inside and outside the building. Panels were fabricated on site, field assembled, and installed using a track system.

Work on both projects went smoothly despite the crowded jobsite, and Ash credits everyone involved. “It was a great team that was assembled, from the architect on down,” he says. “The architect was very involved. We did a lot of front-end shop drawings and went over all the details at the beginning. Hight Jackson is a great architect to deal with. They are second to none on details.”

Ash credits Flintco for coordinating the crews at the jobsite. “Flintco believes in Lean scheduling,” he notes. “We had daily huddles as well as weekly project management meetings. Most obstacles were headed off before they became a problem.”

Franklin and Son had the versatility to tackle multiple scopes of work on the project and the experienced crews to get the job done right. “It all starts with the roofing,” Ash says. “It’s a TPO roof, and we are coordinating metal wall panels above it. We are doing metal wall panels, ACM panels, terra cotta panels. There were a wide variety of different details that had to be coordinated. At our company, the foreman has a meeting with the project managers each day, and we go over any details that need to happen. Don’t get me wrong — there are always hiccups, but we try to avoid them. We pride ourselves on quality and the end results.”