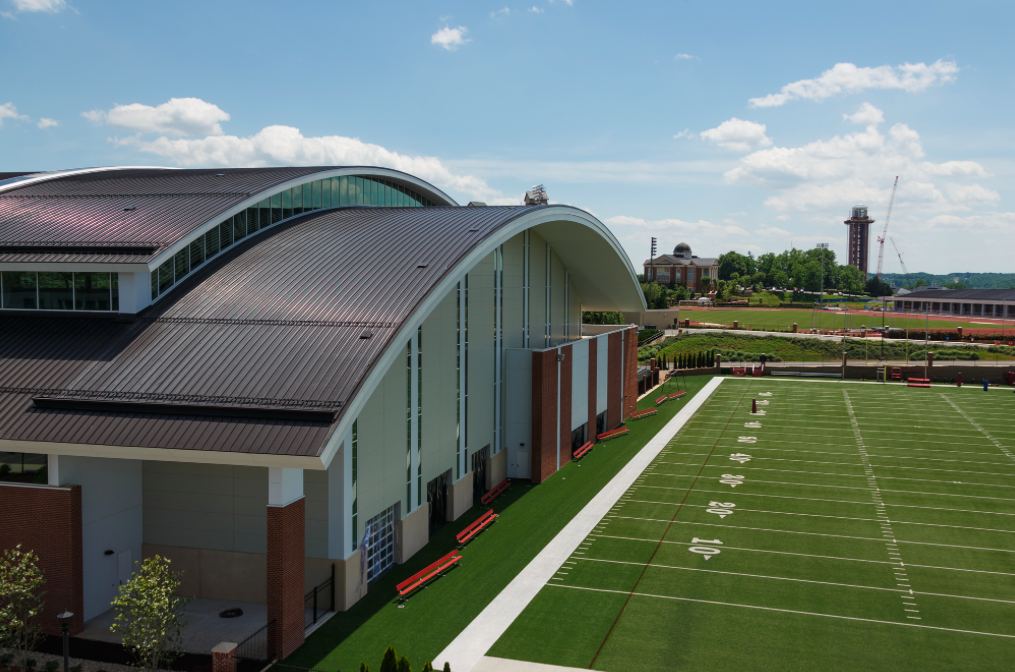 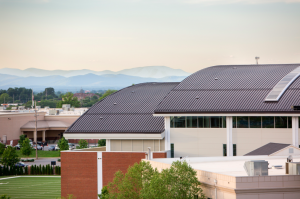 While he was a student in the 1970s at Liberty Baptist College in Lynchburg, Va., Craig McCarty took a job with a roofing company to help him pay his way through school. One of his business courses required students to set up a model business, so McCarty set up a fictional roofing company.

When a recession forced his boss to close down the company where he worked, McCarty turned his classroom project into reality. He got his contractor’s license and formed his own roofing business at the age of 20. More than 40 years later, he is installing roofs on the same campus he once took classes for a college now known as Liberty University.

McCarty is the president of McCarty Roofing, headquartered in Lynchburg, Va. This year the company installed the standing seam metal roof on Liberty University’s new indoor football practice facility, the fourth building the company has worked on at the school. McCarty has always been fascinated by metal roofs, and he estimates that 70 percent of the company’s business comes from the metal segment of the market. “It’s our passion, and we’re really good at it,” he says. 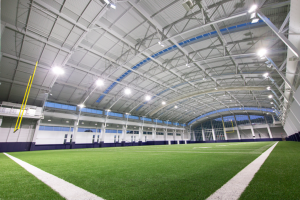 Liberty University’s new indoor practice facility encloses an entire regulation football field. The structural metal roof system is made of panels that run the entire width of the building.

He’s found a great place to ply his trade in Liberty University, which has made roofs manufactured by Fabral Metal Wall and Roof Systems into something of a signature architectural style. Other Fabral roofs at the university include those on Williams Stadium, Hancock Welcome Center, Jerry Falwell Library, and the LaHaye Recreation and Fitness Center.

According to Jerry Wandel, Fabral’s Mid-Atlantic territory manager, based in Richmond, Va., Fabral and distributor NB Handy in Lynchburg have partnered to provide architectural metal enclosure systems for 13 buildings on the campus since 2010.

The new practice facility encloses an entire regulation football field, and the design for the structural metal system on the vaulted barrel roof called for panels—many as long as 240 feet—that would run the entire width of the building.

Fabral’s Stand’N Seam 24-gauge panels in Dark Bronze were specified for the project. According to Wandel, the product features a unique stainless-steel clip design and double lock-seamed side joints that allow panels to expand and contract throughout their entire length. The system had been installed successfully on indoor practice facilities at other colleges, including Georgia Tech, the University of Virginia, Virginia Tech and Virginia Military Institute.

“When you run a panel that long, clearly one of the biggest concerns is expansion and contraction,” Wandel says. “Our Stand’N Seam product just lends itself to a project that has 240-foot panels. This one was right in our wheelhouse.”

The first task for McCarty Roofing was drying in the metal deck. Crews installed two layers of 2 ½ inch polysio and covered the insulation with Blueskin, a self-adhering underlayment manufactured by Henry.

The metal panels were fabricated on the site. Fabral supplied the roll former and brought in Ray Berryhill to operate the equipment. “Ray has done all of these jobs for us,” notes Wandel. “We want to make sure the contractor is in position to have a quality installation. Ray has so much knowledge about these jobs. He was the perfect person to execute this one.” 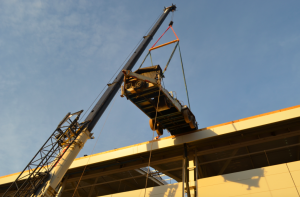 The panels were fabricated on the site. The roll former was lifted into place at the edge of the roof by crane, and panels were rolled directly onto the roof and stacked for installation.

A crane was used to lift the roll former into place at the edge of the roof. “We were able to set the front two feet of the roll former in the built-in steel gutter, and then drop the back end of the machine down to the proper angle so we could roll the panels right onto the roof,” McCarty explains. “About every 15 or 20 feet up the roof we would stack some insulation, so the panel would float across the roof. Once it hit the top and went down the other side, it could just ride the roof down.”

The original plan was to install the panels as they came off the roll former, but McCarty decided it would be more efficient to run all of the panels, stack them on the roof, and install them once all of the panels were fabricated. “We had a large crane on site that was costing us money, and we had the people from Fabral there,” he recalls. “I went to the construction manager and said, ‘It’s going to make a lot more sense if we get all of the panels for the project up on the roof as quickly as possible.’”

The 4,000-pound metal coils typically supplied enough material for 8-10 panels, so Berryhill would run 8-10 panels at a time as crews from McCarty Roofing stacked them. When the roll former was lowered to the ground to load another coil, workers would strap the panels into place, figure out how much area the panels would cover, and set up again another 20 feet or so down the roof to receive the next batch. “We had a series of 15 or 20 straps for each bundle of panels,” says McCarty. “We had to be careful, but with eight people, you could pick up the panel and gently set it down.”

After the roll forming crew was done, the panels were pulled off of the stacks and installed. “It was a pretty extreme radius, but the panels just laid down on the roof perfectly,” McCarty recalls. “The design worked out really well.” 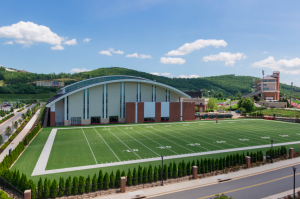 The built-in gutter gave crews a good location to set the bottom edge of the panels. “At the eaves, the roof pitch was very steep—maybe 12:12—and it was almost flat at the top,” notes McCarty. “We had to be tied off 100 percent of the time. We used retractables, but the safety equipment still limited our movement. It was pretty difficult for the guys working the first 30 or 40 feet.”

The roof featured large skylights, which made the metal panel layout critical. The design also featured upper and lower sections that stepped down around large windows, which made for some tricky details. “At the gable ends, we had to make the cuts at an angle,” McCarty notes. “We cut the panels in place with drill shears and hand turned them with tongs to lock then onto a cleat.”

The schedule was tight, and weather was also a concern. “It was in the dead of winter,” McCarty recalls. “We started laying panels in January. Fortunately, we had a mild winter, but at times it was like a wind tunnel. You’re not going to pick up a 240-foot panel in 35 mile-an-hour winds, so there were days we just weren’t able to work.”

The project was wrapped up at the end of May, and McCarty credits the decision to stack the panels as one of the keys to meeting the deadline. “It was the right call,” he says. “The time we saved made up for the lost days due to the weather and helped us complete the job on time.”