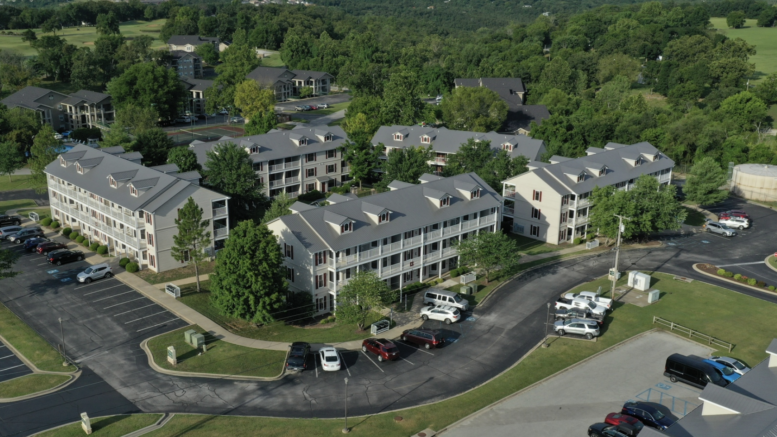 When a devastating winter hailstorm hit the Holiday Hills Resort in Branson, Missouri, the standing seam metal roofs on 92 separate three- and four-story buildings were destroyed. The storm not only damaged roofs but also siding and windows on buildings throughout the 450-acre vacation property. The owners wanted to complete the building envelope repairs before the July 4 holiday, their busiest time of the year. The insurance adjuster wanted one company to tackle all phases of the project and meet the aggressive schedule.

BluSky Restoration Contractors was up to the challenge. Headquartered in Centennial, Colorado, BluSky provides commercial and residential renovation and roofing services across the United States and Puerto Rico. The company specializes in large restoration projects, including repairing and rebuilding commercial roofs after storms, fires, or other events.

“We fix broken buildings,” says Vice President of Commercial Roofing Troy Osborne. “We excel in tight time frame, large-scale projects. We get you back up and running.”

The Holiday Hills project involved roofing, siding, painting, gutters, and windows — and BluSky was perfectly suited to coordinate every phase of the project, according to National Project Director John Corbin. “For this project in particular, the scope really wasn’t limited to the roof,” says Corbin. “So, for us to offer all of the full roofing services alongside of the kind of building envelope services, it was really what the project needed.”

The first step was assessing the damage. The BluSky team convened at the site to determine just what they would be dealing with. “When you have 92 buildings — not all the same, of course — and different scopes of work on different buildings, just getting your quantities correct is a is a monster,” Osborne says. “How many windows are we replacing? How many squares of roofing? We spent the next 24 to 48 hours just getting that 30,000-foot view.”

The estimate was requested in two weeks, so the team immediately began determining the quantities of materials needed. “One of the things that we realized at the onset was if we’re going to get real-world accurate numbers and quantities, we’ve got to take off all these buildings,” Corbin says. “So, we used a little bit of the aerial measurement. We also walked nearly all of these buildings with a tape measure, just to just to really nail it down.”

Ten days later, the team flew out to Dallas with the proposal in hand. “One of the things that BluSky has is a really dynamic in-house estimating department,” says Corbin. “Even so, two weeks for 92 buildings is pretty tough.”

Holiday Hills seized the opportunity to implement a new color scheme as part of the restoration process. “We helped the client by producing 3D renderings of all the buildings and walked them through color options and color changes,” Corbin says. “We were able to show all that to the client and their design department found that to be very beneficial, seeing what the end result would be. They changed the color of every building.”

Roofing and gutter systems were also standardized. “They went with the charcoal finish on all of the roofing metal, both standing steam and the AG panels,” Corbin notes. “And that tied into the trim detail on most of the buildings, and the gutters and downspouts, which were arctic white.”

BluSky was awarded the project in February of 2020 with a hard completion date of July 1. After the final materials were selected, it left BluSky with approximately four months to complete the work.

The installation process was complicated by the logistics of the site. The far-flung buildings wrapping around a golf course made managing crews and delivering materials a challenge. “The buildings were spread out, which gave us room to work, but it made things more complicated in terms of project management and safety,” says Osborne.

As crews were ramping up, the COVID-19 pandemic hit the country. “The coronavirus came over to the mainland USA here and it just changed everything — crew availability, hotel accommodations for our crews, even how we assembled for our daily safety meetings,” Corbin recalls. “Everything was just flipped upside down.”

As crews adjusted to new safety protocols, travel ground to a halt. One result was fewer guests at the resort, which allowed BluSky more flexibility in its approach. “From a production standpoint, we were able to adjust, ramp up and kind of take on multiple phases at a given time and accelerate our schedule,” Corbin says,

The 26-guage, charcoal-colored metal panels for the standing seam roofs were roll-formed on site and installed over APOC Weather Armor HT high-temp underlayment. “We had to lean on a few different companies to contribute panels,” Corbin notes. “The owner did want to add some uniformity to their brand, for ease of maintenance and a little bit of marketing flair. But for us, once we had the metal selections, we knew exactly what coils to procure, how much, and thankfully, we had access to enough material right out of the gate to get this going.”

The re-roofing phase included removing large cupolas from many of the buildings. “The cupolas had just been a nightmare for them to maintain, so one of the requests in the scope was to pull all of those cupolas off,” Corbin says. “There were about 55 of them, and they were big, they were heavy — timber framed with dimensional lumber.”

The cupolas were removed with a crane. “It was interesting to see, because some of our crews had figured out very early on the best, most efficient ways to disassemble these and pull them off,” Corbin notes. “It was then our responsibility to share that with the greater team so that we could get the efficiency up.”

The walls featured a combination of cedar and vinyl lap siding. Damaged sections were replaced, and some existing cedar siding was stained to conform to the new, lighter color scheme. After the siding and roofing work was completed on a building, the drainage systems were installed. “The vertical and roofing crews worked independently of one another, and the gutters and downspouts were kind of the final zipper on things to tie it all together,” Corbin says.

As work progressed, BluSky coordinated the work of multiple crews in each section. “We would have a roofing team start at one end of the street, have a painting and siding and windows crew at the other end of the street, and then we would have them work down the lane and then pass one another. That allowed us to have production going on of the lower vertical elements — siding and windows — and not have roofers roofing over them.”

“We were able to interface that in in a way that just satisfied the safety requirements that we have the crews do. We were able to put buildings into production at a much greater rate.”

BluSky had an in-house, full-time safety consultant dedicated to managing the site’s safety protocol, which was developed along with SFI Compliance Inc. of Englewood, Colorado. “Before the project started, we leaned on a third-party safety consultant to come in and write a site-specific safety protocol for this scope of work on this project under these circumstances,” says Corbin. “And that’s what we leaned on as the Bible of how we’re going to conduct this work safely.”

Ensuring the resort’s meticulous landscaping would not be harmed was a key concern of the client. “To do all of the hoisting and all the material movement and not interrupt the landscaping was tough,” says Corbin. “We had an awful lot of equipment on site, from lifts to telehandlers to articulating booms — just about every piece of equipment you could imagine. And one of the things that we decided as a project team at the start of this project to cut down on that huge variable, is we decided that under no circumstance would any piece of equipment be allowed to go beyond the curb of the street. We were not going to have any equipment on any landscaping at all.”

The mandate took some getting used to, but superintendents quickly developed methods for hoisting materials from the street to the roof. “We did figure it out,” says Corbin. “There was little to no damage to any of the landscaping. We put a lot of effort into making sure that the equipment that we brought on to the site could reach everywhere that we needed it to and carry the load that we needed it to. At the end of the day, it just it saved a lot of headaches because that was a huge unknown.”

Despite the numerous challenges, BluSky finished the work ahead of schedule with no safety incidents.

“Our claim to fame on this project is 92 buildings in 92 days,” Osborne says. “So, we celebrate the success, but to be honest with you, that’s what it was going to be from day one. Failure was never going to be an option.”

Osborne points to experience and teamwork as the keys to the project’s success — and the watchful eye of John Corbin. “Corbin babysat this job like a maniac,” Osborne says. “I’ve never seen someone watch a job from inception to conclusion like Corbin. This was his baby and his pride and joy.”

“We pulled it off because John had the belief, and we were going to put whatever team needed to be on it to get it done,” Osborne concludes. “And by the way, in that scenario, 92 different buildings gave us the opportunity to use as many people as we needed to. And this is our strength. We have strong trade partners, and we knew that as long as the material suppliers could keep up, we could produce the work.”

A Roof Coating Is the Right Answer for Florida Condo Complex