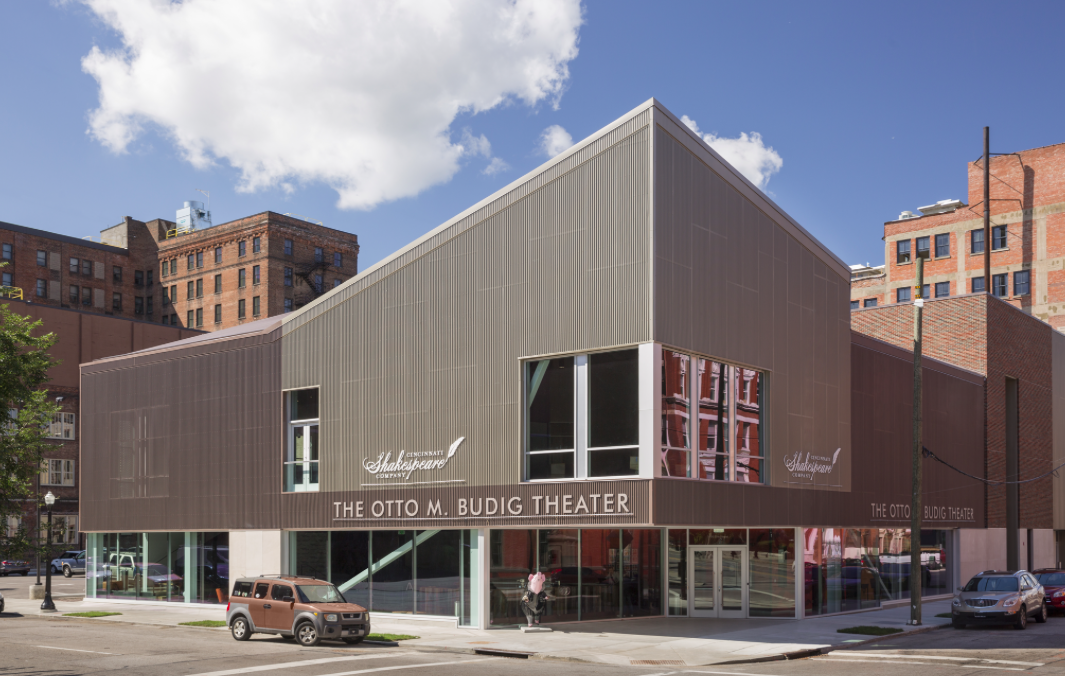 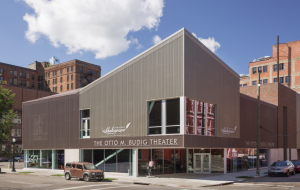 The Otto M. Budig Theater is the home of the Cincinnati Shakespeare Company. The new theater was designed by GBBN Architects in Cincinnati. Photos: Petersen Aluminum Corp

For many new arenas and theaters, the sheer size and scope of the project can pose the biggest hurdles. At the new Otto M. Budig Theater, home of the Cincinnati Shakespeare Company, the problem was the reverse. The intimate theater was shoehorned into an existing space up against an adjacent building, so logistics were tight. But that didn’t mean the roof system couldn’t be striking. Designed by GBBN Architects in Cincinnati, the building’s exterior features daring angles and multi-colored metal roof and wall panels that combine to help capture the spirit of the Shakespearean theater.

Matt Gennett, senior project manager and vice president of Tecta America Zero Company in Cincinnati, oversaw the roofing portion of the new construction project in the Over the Rhine section of Cincinnati on the corner of Elm Street and 12th Street. “This building was plugged in downtown, and they fit everything in real tight,” he says.

Approximately 5,400 square feet of PAC-CLAD 7/8-inch, 24-gauge Corrugated Panels from Petersen Aluminum Corp. were installed on the metal roofs and walls. Tecta America Zero Company installed the metal roof systems, as well as a TPO roof manufactured by Carlisle SynTec over the main structure and mechanical well. Work began in January of 2017 and the roofing portion of the project was wrapped up in late August.

The building features two different metal roof systems. The roof on the Elm Street side is comprised of three intersecting triangle-shaped sections in two colors, Champagne Metallic and Custom Metallic Bronze. “There were several unique angles on the roof,” Gennett explains. “On the top, there was a second metal roof, a shed roof that went down to the 12th Street side.” 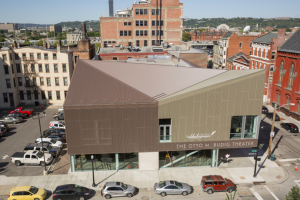 The metal roof systems were installed over a 2-inch layer of polyisocyanurate insulation and a 2-1/2-inch nail base from Hunter Panels, H-Shield NB. The nail base is a composite panel with a closed-cell polyisocyanurate foam core, a fiber-reinforced facer on one side and, in this case, 7⁄16-inch oriented strand board (OSB) on the other. The nail base was topped with Carlisle WIP 300 HT waterproofing underlayment to dry in the roof.

Crews also installed two rows of snow guards on the metal roof using the S-5! CorruBracket. “The snow guard was a little different,” Gennett says. “It was specifically designed for a corrugated roof.”

The main roof and mechanical well were covered with the TPO roof system, which totaled approximately 8,300 square feet. After Carlisle VapAir Seal725 TR self-adhering air and vapor barrier was applied to the metal deck, crews installed two layers of 2-inch iso. Tapered insulation was applied over the top to ensure proper drainage. The insulation was covered with a 1/2-inch sheetrock and the 60-mil TPO was fully adhered.

Two large smoke hatches manufactured by Bilco were installed over the stage area. The ACDSH smoke hatches measured 66 inches by 144 inches, and are designed for theaters, concert halls and other interior applications that require limiting noise intrusion.

The initial focus was to get the roof dried in so work could progress inside the building. The jobsite conditions posed a few challenges. The structure abutted an existing building, and the space was tight. The schedule necessitated multiple trips to the site, which can be a budget-buster on a small project. “We had a lot of trips in and out to accommodate the schedule and get everything dried in so they could meet the interior schedule,” notes Gennett. “We were sort of on call. We made three or four trips out to roof this small project, so it took a lot of coordination because it was completed in pieces.”

Crews tackled the TPO roof sections first. The mechanical well section provided several challenges. Changes in the mechanical well layout necessitated moving some curbs and making adjustments to the tapered insulation. “They were trying to get lot of equipment into a small space,” Gennett explains. “We had to make sure we could get the water to the low spots and route it around all of that equipment. That was probably the biggest challenge on the project.”

Staging material was also problematic, as traffic was heavy and parking space was at a premium. Material was loaded by a crane, which had to be set up in the street. “It’s a postage stamp of a site,” says Gennett. “This is a main thoroughfare, and there is a school right across the street. We had to work around school hours, and we couldn’t be working when the busses were coming in. We usually came in after school started, around 8 a.m., to load materials.”

When it came time to load the metal panels, the cramped jobsite actually paid off. “It was very convenient,” Gennett recalls. “We were able to load the panels onto the adjacent roof and just hand them over. We had a nice staging area for cutting, so all in all it wasn’t bad.”

The corrugated panels were installed with matching edge metal. “It’s not a complicated panel to install, and they look really nice,” Gennett notes. “On the Elm Street side, to the right of the valley was one color, and to the left was another, so we had to match the color with our coping. There were some interesting transitions with our metal. We also had to really pay attention to how the siding was being installed so we could match the metal to the siding and follow the transitions from color to color.”

The perforated wall panels were installed by ProCLAD Inc. of Noblesville, Indiana. “Once the walls were done, we came in and did the transition metal,” Gennett says. “We just had to make sure everything lined up perfectly.”

Ensuring a safe jobsite was the top priority for Tecta America Zero and Messer Construction, the general contractor on the project. “Both Messer Construction and Tecta America take safety very seriously. That’s why we’re good partners,” Gennett says. “We had PPE, high-visibility clothing, hard hats, safety glasses for the whole project. All of the guys were required to have their OSHA 10. Anyone outside of the safety barriers had to be tied off 100 percent of the time.”

Planning ahead was the key to establishing the safety plan and meeting the schedule while ensuring a top-quality installation. “This job had a lot of in and out, which is tough in the roofing business,” Gennett says. “But we planned ahead, we made sure everything was ready for us when we mobilized, and we did a good job of coordinating with the other trades. It took a lot of meetings and discussions — just good project management.”

Gennett credits the successful installation to a great team effort between everyone involved, including the general contractor, the subcontractors, and the manufacturers. “We pride ourselves on our great, skilled crews and our great field project management,” he says. “Our superintendents are there every day checking the work and making sure the guys have everything they need. Messer Construction is great to work with, and obviously having the manufacturer involved the project and doing their inspections as well helps ensure the quality meets everyone’s standards and holds the warranty.”

The theater is now another exciting venue in the Over the Rhine neighborhood. “It is really cool spot,” Gennett says. “It’s an up-and-coming neighborhood that’s grown in leaps and bounds in the last seven years. There is a ton going on in Cincinnati. It’s just another part of the city that makes it really fun to go downtown.”