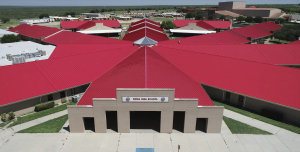 Officials at Roma High School in Roma, Texas, knew they needed a new roof. The tile roof on the main complex was more than 25 years old, and some components were clearly failing. They didn’t realize that many of the leaks and resulting wall deterioration were caused by other problems as well. Luckily, they reached out to design and construction professionals who did their homework, diagnosed all of the key problems, and developed a plan to fix them. The crowning touch of the building envelope restoration plan was a beautiful standing seam metal roof, and the success of the project is proof that hard work pays off not only in the classroom, but on top of it.

They found quite a few, notes Michael Hovar, AIA, RRO, LEED AP, a senior architect and the general manager of the company’s RGV office. “They thought all they had was a roofing problem,” he notes. “But we saw right away that not properly managing water off the roof was the cause of wall deterioration, which then became leaks into the building. Our experience with the entire envelope and all facets of design and construction really helped us on this one.” 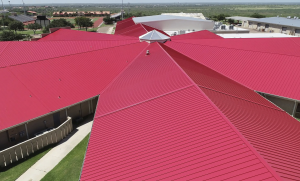 Amtech Solutions put together a presentation for the school board to detail what they discovered and the plan they proposed to remedy the situation. The company also worked with the school district to help develop a budget.
The restoration plan was split up into three phases. The first phase focused on restoring the walls and windows. The second phase encompassed roof replacement and installing new mechanical equipment. The third phase involved improving drainage, grading and other site repairs.

Amtech Solutions decided not to bid the project out to a general contractor, but rather to bid each phase separately. “We decided to split it up into stages and do it logically, starting with the walls first,” Hovar says. “For the walls, we got restoration contractors who specialize in wall restoration work.”

Restoration Services Inc. (RSI) of Houston, Texas handled the first phase in the summer, as the wall repairs would be louder and more disruptive to students. The roof replacement project was scheduled for the fall. “Once all of the stuff on the ground was done, that allowed us to do the re-roofing work throughout the school year, which also helped the price,” notes Hovar. “Our experience has always been that if we have good cooperation with the contractors and the school staff, at the end of the job they end up being best friends. And that’s exactly what happened. At the end of the job, they were sad to see the roofers go.”

Amtech Solutions convinced the school district the plan would work. “It took some coordination, communication and cooperation, and it took a motivated owner that was willing to do this and trust us,” Hovar says. “They looked to us for guidance, and we said, ‘We do this all the time. We do roofing projects throughout the year, occupied and unoccupied, and we do it in a way that respects what the occupant’s needs are.’”

When it came time to specify the roof system, school board members were divided; one faction wanted to install a new tile roof, and the other wanted to go with metal. “The interesting thing is, for the historical architecture of the area, both of those roofs are appropriate, so from the standpoint of historical significance, either one works,” Hovar says. “In the end, it was quite a bit more expensive to utilize tile than it was to utilize a metal roof.”

The decision was made to go with a standing seam metal roof from McElroy Metal on the vast majority of the complex, including the main roof, the gymnasium, and two freestanding structures — the art and industrial arts buildings — that had been added over the years. The main tile roof was removed and replaced with McElroy’s 138T Panel, a 16-inch-wide, 24-gauge panel in Brite Red. McElroy’s 238T Panel, a 24-inch-wide, 24-gauge panel, was specified for the gym, as well as the art and industrial arts buildings. In a cost-saving measure, the color on the gym roof was changes to Galvalume Plus. In all, more than 233,000 square feet of metal roofing was installed. 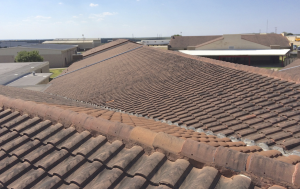 “The reason we picked this roof system is we’ve had a lot of great experience with it,” Hovar says. “We love that panel because they can actually bring the roll former to the jobsite. That gives the roofing contractor a lot more options on how he can load the roof and sequence the job. The other beauty of this panel is that it has unlimited movement. The panels itself slides back and forth over a fixed clip. It also flashes like a dream.”

Low-slope roof areas adjacent to the gym were replaced with a two-ply modified bitumen system from Siplast. CPI Daylighting manufactured a new skylight for the atrium.

As part of the roofing phase, gutters and downspouts were added. “There was nothing controlling the water before on this project,” Hovar says. “We designed a gutter system with expansion joints as per SMACNA guidelines. The contractor made absolutely beautiful shop-welded aluminum downspout boots.”

The most crucial detail was a custom-made saddle that solved the problem of water infiltration at the transition between the roof and walls on the wings. “This ultimately simple solution addressed one of the major design flaws that plagued the facility from the first days of occupancy,” Hovar notes. “We modeled the three-dimensional design of those saddles, and the contractor welded them in his shop. He fabricated them out of .080 aluminum and they were seamless. The restoration contractor had already installed all of the through-wall flashing, so all the roofer had to do was put counterflashing in and do his work around it. He was able to fly without being slowed down by a mason on the job.”

The roofing phase of the project was handled by Rio Roofing, headquartered in Harlingen, Texas. The company primarily installs low-slope and metal roofs, and its focus is on large commercial and institutional projects. ““We do nearly 90 percent public bonded work,” notes Hedley Hichens, vice president of Rio Roofing. “We found out that whether it’s a small job or a big job, the paperwork is still the same, so we try to make it worthwhile.”

The company worked on the Roma High School project for about a year, wrapping up the roofing phase of the project in November 2017. 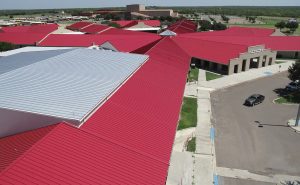 The decision was made to tackle the wings on the main roof first. “During the pre-con meetings, we met with the principal and the superintendent and asked, ‘Which wings are the worst?’” Hichens notes. “There was one wing that was the most problematic, so we started with that area first.”

Rio Roofing began by tearing off the existing tile roof. “There were about 1,925 squares of concrete tile we had to remove,” Hichens notes. “We had crews on the roof tearing off tile, crews on the ground palletizing the tile and storing it in the parking lot.”

As crew members removed the old tile and felt, others followed behind and installed polyisocyanurate insulation and Polystick MTS, a waterproofing underlayment designed for high-temperature applications. “We did 40 or 50 squares a day, moving down the wing,” Hichens says. “We dried in the whole school. Then we came back with the 138 panel.”

On top of the gym and other buildings that received the 238T panel, the existing metal roofs were left in place. “We put flute fill on top of the old panels. Then we screwed down 3/8-inch Securock, primed it and put the Polyglass underlayment down on top of that,” Hichens explains. “That 24-inch panel is a great panel to work with because every time you put one down, you’re 2 feet closer to finishing.”

The school’s main roof covers a central hub with eight wings coming off of its octagonal skylight. Where the wings tie together, access was limited.

“It was a tight squeeze,” Hichens says. “Getting in there and getting out was difficult. I think our fork lift only cleared one of the walkways by 2 or 3 inches. It’s a big campus, but the layout was difficult at the school.”

Once the wings were dried in, sheet metal crews installed the edge metal and 4,000 linear feet of gutters. They also started forming the panels.

Typically, Rio Roofing lifts the roll former to the roof edge, but it was difficult to get a large lift next to the building, so in this case the roll former was left on the ground. It was moved from wing to wing as the job progressed. “We used a New Tech roll former on this project,” Hichens says, “We would put the roll former parallel to each wing and store the panels on the ground in each area.”

Panels were hemmed and notched using a Swenson Snap Table Pro and lifted to the roof with a fork lift and a special cradle. Crews used a hand seamer to set temporary seams and followed up with a robotic seamer from D.I. Roof Seamers. “The panels are easy to install,” Hichens says. “You get about four guys 10 feet apart to engage the panels and clips and you just keep going. At the end of the day crews put the seam caps on.”

On the low-slope areas, Rio Roofing installed approximately 47,000 square feet of the Siplast two-ply SBS modified system, which was torched down over new lightweight concrete. “For their size, the low-slope areas had a ton of mechanical equipment and ductwork up there,” notes Hichens. “There were a lot of key details.”

Rio Roofing custom-manufactured numerous curbs and details, including the saddles over problem areas at the walls. “We have a full welding shop,” Hichens notes. “We have a full machine shop. We make all of our own curbs here, so there is no lead time for ordering curbs, and we are sure they’ll fit.”

Work on the project has now moved on to a fourth phase: installing translucent panels over the swimming pool. Hovar believes teamwork was the key to the project’s success. “We had such a good contracting team, we did good field work to begin with, and we had an understanding owner,” he says. “Designing it wasn’t easy, but thankfully our experience helped. We just had a really good team to execute it, all the way around. That’s what makes for a great, project, right? When everybody is invested in a good outcome, they always support everybody else.”