Kevin Clausen has faced a lot of challenges during his 30 years at Great Lakes Systems, a Jenison, Mich.-based construction company specializing in single-ply commercial roofs. But when he received a call several years ago from a Kent County official about an unusual upcoming project, Clausen knew he might be taking on a challenge unlike any other. 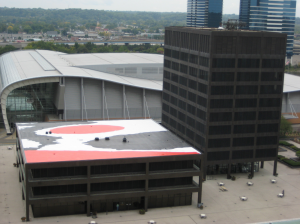 Kent County is home to Grand Rapids, Mich. To understand the challenge that Clausen was about to face, it’s important to understand a little Grand Rapids history. In the late 1960s, swept along by the tide of enthusiasm for urban renewal, the city demolished 120 buildings in its aging downtown core and built a new City Hall and County Administration building, surrounded by a concrete plaza. The new government buildings were designed by architects who were shaped by mid-century ideas of good urban design: sleek, boxy single-use structures, easily accessed by automobile and, therefore, providing ample parking. Pedestrians were something of an afterthought.

At about the same time, the National Endowment for the Arts initiated its Art in Public Places Program. There was general agreement in Grand Rapids that the broad plaza in front of the new buildings seemed empty and generally lacked visual interest. The city applied for a grant to support the funding of a monumental sculpture to serve as a focal point for its new plaza and selected renowned sculptor Alexander Calder for the commission. Two years later, Calder’s sculpture—bright red, 43- feet tall, 54-feet long, 30-feet wide, weighing 42 tons—took its place on the central plaza. It was named “La Grande Vitesse”, which roughly translates into “Grand Rapids”. For obvious reasons, the broad plaza has been called Calder Plaza—and has been the focus of controversy ever since.

Fast-forward three decades and the aging modified bitumen roofing membrane, which supported the Calder mural, had weathered badly and was in need of repair or replacement. The challenge? How to repair the roof and still preserve the Calder mural. Given the deteriorated condition of the roofing membrane, a complete tear-off was required. Basically, the task at hand was to replace the canvas of a painting and recreate the painting, maintaining its original appearance. 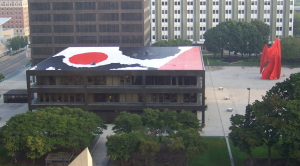 Great Lakes Systems, Jenison, Mich., was challenged to recreate the Calder mural on a new EPDM roof after tearing off the modified bitumen roof on which the mural was originally painted.

The team at Great Lakes Systems has a long track record of doing work for Kent County, including the jail, juvenile facility and several libraries. Therefore, county leaders turned to Great Lakes Systems when they realized they need- ed a creative solution to repair their unique roof. Clausen says the county wanted to preserve the mural, but a long-lasting, durable roof was a top priority. “They definitely wanted a high-quality roof,” he says.

The project faced other constraints, in addition to the painted surface. The administration building is located in a prominent spot in the middle of downtown Grand Rapids, near the museum dedicated to former President Gerald Ford and adjacent to two major expressways. No interruption of normal activities could be allowed—either on the plaza or in the building supporting the Calder mural. And—perhaps most challenging—Great Lakes Systems was given three weeks to complete the project before the inaugural ArtPrize competition would take over much of downtown Grand Rapids. That meant the team would have two weeks for the roof installation, leaving one week to repaint the mural. This was less than half the time usually required for a comparable project.

For Clausen, one part of the project was easy. He had used EPDM membrane on a variety of prior projects for county buildings, and county officials had been pleased with the results, especially the balance of cost-effective installation and long service life. “We looked at other membranes, given the nature of the project, but we always came back to EPDM, given its 30-year plus lifespan,” Clausen notes. “If we have to paint again, that’s OK, but we don’t want to reroof.”

For this project, fully adhered EPDM, as well as insulation ad- hered to the concrete deck, offered two important benefits: a painting surface that would be appropriate for the repainted mural and minimal noise (compared to a mechanically attached system) so that work in the building below could continue as normal.

Great Lakes Systems used 60-mil EPDM to replace the aging modified bitumen system. The 18,500-square-foot roof was backed by two layers of 2-inch polyiso insulation, and the EPDM membrane was covered with an acrylic top coat to provide a smooth surface for the new painting. The top coat matched the three colors of the mural—red, black and white. The red was a custom tinted acrylic paint deemed to be compatible with the EPDM membrane and the black and white acrylic top coat provided by the EPDM manufacturer. 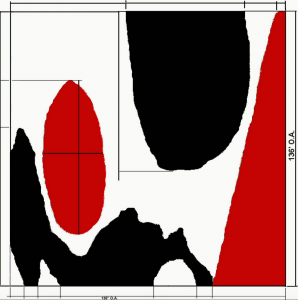 Great Lakes Systems took aerial photos of the existing roof, created a grid of the roof and—scaling the design from the photos—recreated the mural exactly, a sort of large-scale paint- by-number approach.

The Great Lakes Systems’ team applied a creative approach to recreate the mural, adhering carefully to the original design. Because the county used the same colors on its street signs as in the original mural, color codes were available to allow the team to access colors that were identical to those specified by Calder.

Great Lakes Systems took aerial photos of the existing roof, created a grid of the roof and—scaling the design from the photos—recreated the mural exactly, a sort of large-scale paint-by-number approach. The most intricate part of the painting was the layout. Although some free-hand painting had to be done along several jagged edges, the team painstakingly followed the scaled grid and applied chalk lines to outline the original design on the repaired roof. Roller applications were used at the border of the chalk lines to define individual spaces and mark the stopping and starting points for the different colors. Following this “outlining” work, the large areas were sprayed to complete the painting process. The three-man painting crew finished the job with several days to spare, helped along with very good weather.

The roofing project was an informal jump-start toward reimagining uses for Calder Plaza. This past summer, Grand Rapids residents were given the opportunity to voice their preferences for new landscaping for the plaza, provide input for activities that would attract more families and children, and generally make the space more pedestrian friendly. The new proposals are generating excitement and enthusiasm in Grand Rapids. As the new plans become reality, the citizens of Grand Rapids can be assured the Calder mural and the roof supporting it will be doing their part to add beauty and shelter to Calder Plaza and its buildings for decades to come.