Standing in line for hours for one case of canned beer might seem foolish to some people, but to fans of Tree House Brewing — which was recently named one of the country’s Top 15 Craft Breweries by Forbes magazine — it is well worth it. Tree House Brewing began humbly enough in 2011 in a barn in Brimfield, Massachusetts. And yes, there was a tree house on the property.

Since then, the brewery has grown so much in popularity that it required a bigger facility.  So in July of 2017, Tree House opened a 51,200-square-foot brewery on 68 acres in Charlton, Massachusetts. On opening day, the new facility consistently had 1,000 customers waiting for hours to purchase Tree House’s ales, IPAs and stouts. Many of the patrons traveled from out of state and some arrived at 6 a.m., six hours before the doors opened.

It’s been said that the key to Tree House Brewing’s success is meticulous attention to details such as temperatures, additives and the water used in the brewing. It only made sense that the same attention to detail would be utilized when selecting a roofing system for the new facility.

The roof that Tree House Brewing selected to cover its new brewery is Sika Roofing’s Sarnafil EnergySmart PVC membrane installed with the Sarnafil RhinoBond System. “We like Sarnafil because it is easy to use, easy to specify and an industry leader,” says Peter Webster, designer/project manager at Austin Design in Brattleboro, Vermont. “The light colored, reflective roof also offers energy savings, and our past experience with the Sarnafil roof shows it is a great product.” 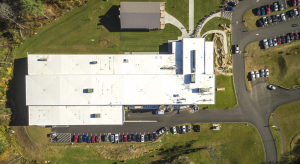 The fact that the Sarnafil system is easy to install was an important factor, considering the time crunch of the project. “This was a ‘hurry up’ project — we weren’t done with the design when the steel structure went up,” Webster explains.

The Sarnafil RhinoBond System uses advanced induction welding technology to bond the membrane directly to specially coated plates used to secure the insulation to the deck, all without penetrating the roofing membrane.

In addition, the Sarnafil RhinoBond System can be used in temperatures as low as zero degrees Fahrenheit (-18°C), making it an ideal application method for winter projects.

“Much of the installation was during the winter,” states Robert Luukko, president of Kidd-Luukko Corporation in Worcester, Massachusetts, the roofing contractor on the project. 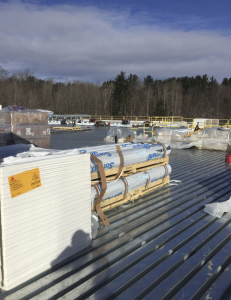 “Not only did Kidd-Luukko have to deal with cold temperatures, but the site is on top of a hill so there were high winds,” says Frank Quigley, president and owner of F.D. Quigley & Associates of Wilbraham, Massachusetts, the construction manager on the job. And of course, since it was winter they needed to make the building watertight as quickly as possible.

“Fortunately, Kidd-Luukko was able to seal the building before we were hit by some big snowstorms in February,” Webster says.

Other challenges included installing a 42-foot by 8-foot skylight and working around gables where the low roof wrapped around the corners. “Kidd-Luukko employees were very professional, well managed and well organized,” Quigley states. “I’d be happy to use them again.”

“Bob Luukko and his team had a ‘can-do’ attitude that really helped move the project along,” Webster comments. In fact, Kidd-Luukko was able to complete the installation ahead of the allotted eight-month time frame, Luukko notes, adding that teamwork was key. “We had weekly meetings with a great group of guys involved with the project where we would discuss how we were going to come in on time and on budget with this installation,” he says. Sika Roofing representatives also played a role in meeting the deadline. “We had multiple visits from the Sika technician, which really kept the project moving forward,” Luukko remarks. 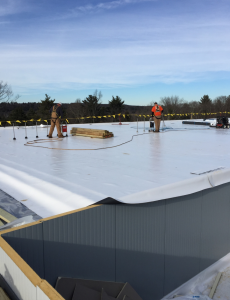 After a vapor barrier was applied on the metal deck, crews installed polyiso insulation, tapered insulation and a high-density cover board before the membrane was attached. Photos: Sika Sarnafil

Today, both the roof and the brewery are doing great. “We’ve had no problems with the roof at all,” Webster says. Luukko adds, “This project went so well that we are receiving a lot of interest in installing Sarnafil roofs on other projects.”