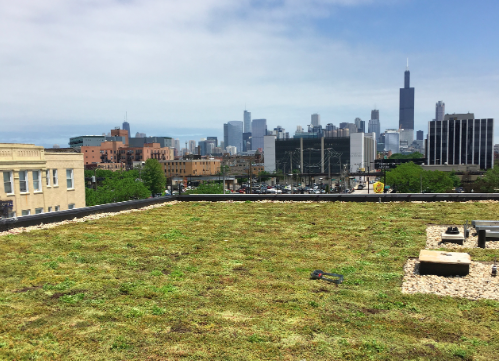 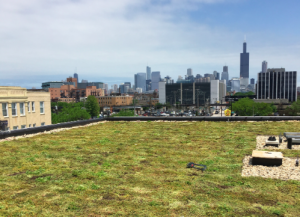 The Chicago Blackhawks have captured the hearts of the city of Chicago along with three Stanley Cups in the last decade. The Blackhawks routinely lead the league in attendance at the United Center, and fans were excited when the team announced it would build a new 125,000-square-foot training facility and community center in downtown Chicago.

Completed earlier this year, the MB Arena features two NHL-sized ice rinks and other amenities including a fitness center, dining options, and spaces that can be rented for outings and events. The facility is the practice site for the Blackhawks and also hosts youth hockey, adult hockey leagues and public skating.

When plans for the project were unveiled, architects and planners mandated the facility meet or exceed all green and sustainable standards for the city. Chicago has been a leader in promoting vegetative roofs to help control storm water runoff, and this new construction project was no exception. The arena includes the construction of 24,000 square feet of green roof systems to complement the structure’s 68,000-square-foot main roof. A 60-mil TPO system manufactured by Carlilse SynTec was specified for the upper roof assembly, and plans called for an American Hydrotech Extensive Garden Roof Assembly to be placed on two lower sections of the roof.

Architect HOK worked with American Hydrotech during the design stage to select roofing components and plants that were optimized for the climate conditions and the building’s structural limitations. 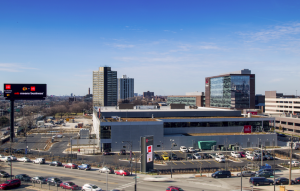 “Our 4-inch extensive garden roof system was ideal for this project,” says Yanez. “Since part of this project had a metal deck, there are more structural capacity concerns than with a concrete deck, so we were able to put together a lightweight, built-in-place system.”

The assembly consists of a hot-applied rubberized asphalt membrane, MM6125, which is applied to the roofing substrate to form a monolithic coating. It is topped with a root barrier and Dow Styrofoam insulation. The system also incorporates Hydrotech’s Gardendrain GR15, a molded polyethylene panel designed to retain water, filter fabric, lightweight growing media, and mature plants.

The plants are installed in the form of the InstaGreen Sedum Carpet, a pre-grown mat that comes in 25-square-foot rolls. It contains between nine and 15 different types of sedum and provides instant coverage when it is installed.

Key benefits of the system include reducing the urban heat island effect, purifying the air, and limiting storm water runoff, notes Yanez. “The Extensive Garden Roof Assembly is able to capture more than 1.5 inches of water on the roof, which plays a major role in storm water management,” he says.

The system also protects the membrane from ultraviolet (UV) degradation and damage from wind-blown debris. “Most importantly, for us, a garden roof is just another version of a PMR, or protected membrane roofing,” says Yanez. “Because the membrane is always in a PMR application, with Dow insulation over it, whatever ballast — whether it’s gravel ballast, or architectural pavers, or the garden roof assembly — is in place makes it literally impossible for the membrane to get damaged. It also mitigates the climate swings, keeping the membrane at a more constant temperature year-round.”

This system has a proven track record, according to Yanez. “We’ve been doing this going back 50 years on parking decks under regular topsoil, where weight wasn’t a concern,” he points out. “This is just a more modern version of that, but we’re putting it on the 4th, or the 14th, or the 99th floor.”

All American Exterior Solutions, Lake Zurich, Illinois, is an approved applicator for both key manufacturers. The union contractor installed the Carlisle TPO system on the building’s main roof and the Hydrotech green roofs on the two lower roof levels.

Willie Hedrick, division manager at All American Exterior Solutions, notes that the TPO roof was installed first. “The deck was acoustic, so first we had to lay strips insulation in the flutes over the entire main roof,” he says. 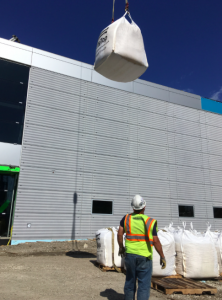 The lightweight growth media was lifted to the roof in 2-yard totes. Photo: Christy Webber Landscapes.

Areas that housed mechanical equipment were reinforced with two layers of 5/8-inch DensDeck from Georgia-Pacific. Two layers of 2.6-inch insulation were then installed, followed by the 60-mil TPO, which was mechanically attached using the RhinoBond system from OMG Roofing Products. The attachment system uses induction welding technology to attach the membrane to the fasteners and plates that secure the insulation — without penetrating the membrane.

The main roof was originally designed as fully adhered system, but work began in January, and the temperature constraints ruled out some adhesives. “Once we made the switch to RhinoBond, we were able to install the membrane even though we did it during the winter,” Hedrick says.

Most of the TPO roof was surrounded by high parapet walls, and in other areas the safety perimeters were marked with flags. “At a few points at the highest points of the main roof we had to put up some the flags, and if you were outside of the flags you had to be tied off,” notes Hedrick. “The mid-roofs had short parapet walls, and on those roofs, we set up flags and had 100 percent fall protection outside the safety perimeter. For the lower green roof, we put guardrails up on the parapet to eliminate the fall hazard.”

After the TPO sections were installed, work began on the extensive garden roof assemblies. The mid-roof had a metal deck, so the first step was to screw down 5/8-inch USG Securock cover board and strip in the seams. “At that point, we installed the liquid-applied membrane and the protection board,” Hedrick says.

The second green roof was installed over a concrete deck, so the application was a bit different. The membrane was applied directly to the concrete. A late change was made in the configuration of the lower green roof to take advantage of the space. “The owner decided to add a terrace to the lower green roof so people could walk out and see the roof and views of the city,” Hedrick recalls.

Before the growing media and plants were added, electronic field vector mapping (EFVM) was conducted by International Leak Detection to determine if there were any voids in the membrane. “You’ve got to confirm everything is 100 percent watertight before we start setting the components down,” Hedrick says. “We usually do the test and start putting the components down the next day to minimize exposure. The subcontractor we worked with to do the landscaping, Christy Webber, performed well. Since some of the components are loose laid, we worked with them to put down enough soil to hold everything in place. We worked hand-in-hand getting the all of the components and soil in.”

Jim Waldschmidt, project manager for Christy Webber Landscapes, Chicago, oversaw the installation of the lightweight growing media and sedum mats on the roof. Christy Webber is a full-service union landscaping company, and Waldschmidt notes that roofing work is a small but growing share of the company’s business. “We work with a few different commercial roofers,” he says. “This year we’ve done maybe 10 commercial projects.” 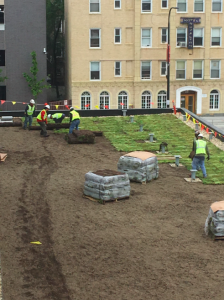 Logistics at the site made for an easy delivery and setup — an unusual situation in downtown Chicago. “We were able to deliver the soil almost a week before we were scheduled to go out there, so we had everything on site and knew we wouldn’t have to worry about waiting,” Waldschmidt notes. “We just had to bring in a crane and lift up the soil bags. We had a pretty easy installation compared to other green roofs we’ve done.”

Growing media was lifted to the roof in 2-yard tote bags, which were cut open to disperse the contents. Three days after the growing media was in place, Christy Webber crews returned to install the sedum mats. “The sedum mats are delivered on pallets almost like the way a roll of sod would be delivered,” says Waldschmidt. “We just had to set the pallets on the roof, pull off the sedum mats and unroll them.”

A temporary irrigation system was set up to help the plants get established in the hot July temperatures. “Everything looks great now,” Waldschmidt says. “All of the sedum up there is thriving.”

In this high-profile project, with a high-profile owner, making sure the system was error-free was critical, notes Serena. “Chicago is definitely the leader in vegetative roofs, and has been for more than 10 years,” he says. “This is another prime example. There was never a question whether this building would have a green roof on it. It’s a credit to Chicago, and it is a credit to the Chicago Blackhawks.”

Hedrick is proud to be part of the green roof movement. “I like the challenge, and I like the diversity,” he says. “When the Blackhawks went to the Stanley Cup championship and the blimp was hovering over the arena, I could see a couple of my projects on TV. It reminded me of all the time, effort, attention to detail, and collaborative hard work that it took to produce the final product. We’re turning typically unusable roof areas into useful space for amenities.”

Conversion Kit for PaceCart Is an Economical Option