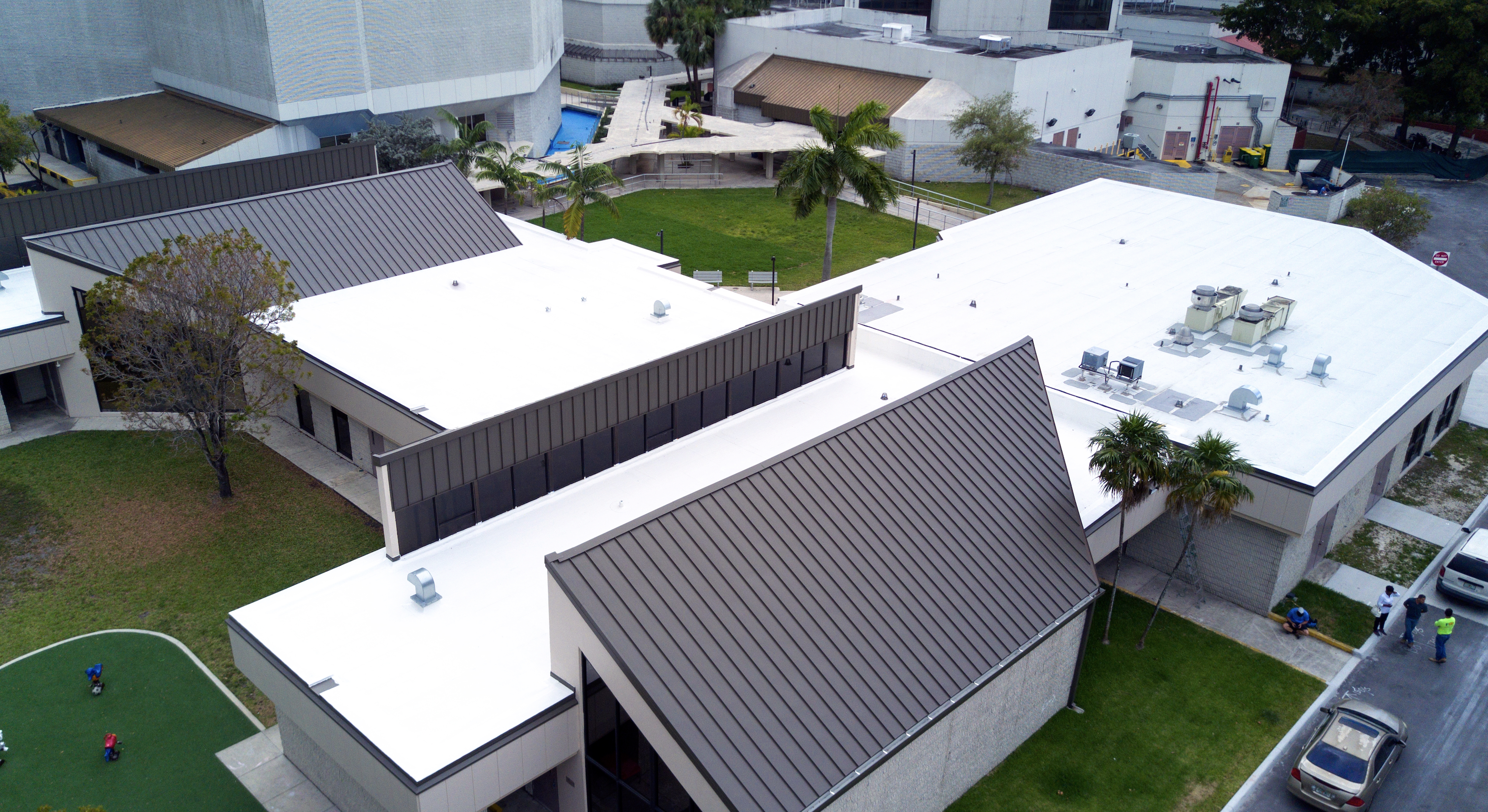 The Joseph Caleb Center in Miami caters to a very young clientele, but the building housing the early childhood education center was definitely showing its age. The existing roof was failing, the concrete walls were cracked, and the window seals were broken. The restoration project was a complicated one, with several roof and wall systems that had to be tied in together. Luckily, that’s just the type of project Errol Portuondo likes. Portuondo is the owner of Florida Building & Supply in Miami, which focuses primarily on commercial restoration and re-roofing projects. The company restored the building, topping it with a new self-adhered, modified bitumen roof system and crowning it with a standing seam metal roof around the perimeter.

“We handle the whole envelope,” Portuondo notes. “That’s what sets us apart. That’s our niche. We like to go into these projects that have four, five, six items—the kind of projects other companies avoid. Most people like to handle the easy stuff—get in and get out. We like to tackle the harder type projects that require a lot of thinking.”

The project required a roof system that was Energy Star rated and would comply with South Florida’s requirements for high velocity hurricane zones. Furthermore, the building would remain open during the roofing installation process, so the roof system could not give off any fumes or volatile organic compounds (VOCs). A self-adhered modified bitumen roof system from Polyglass USA Inc. was chosen for the flat roof sections because of its high reflectivity, durability, and ease of installation, as well as the lack of any odor.

The existing roof consisted of a mechanically attached modified system surrounded by a standing seam metal roof. Florida Building & Supply first removed the metal roof system, as it partially covered the flat roof. After the steep-slope sections were dried in with 30-pound felt and Englert MetalMan HT self-adhered underlayment, crews began to tear off the old modified system. Everything was removed down to the lightweight insulating concrete (LWIC) that had been installed over the metal deck. 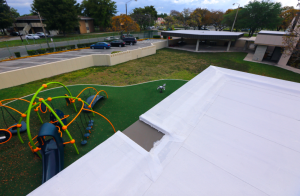 The day care center was open during the restoration project, so the safety plan included moving the children’s playground during the roof installation. Photos: Polyglass USA Inc.

The specification called for adhering polyiso insulation directly to the lightweight with OlyBond 500 adhesive from OMG Roofing Products, so making sure the LWIC was in good shape was crucial. Core samples were taken of the roof and subjected to a series of adhesion and compression tests required by the county. “We passed all of the tests and got all of the approvals regarding the lightweight, and we installed the insulation and the Polyglass system on top of that,” Portuondo says. “We like using that system because it is easy to install and allows us to salvage the lightweight. It also gives you really great uplift resistance.”

Crews installed tapered polyiso insulation manufactured by Hunter Panels to a custom-designed layout provided by ABC Supply Co. Insulation ranged in thickness from more than 5 inches to a minimum of 1 ½ inches. After the existing roof system was removed, Portuondo realized that the deck could not be penetrated without potentially damaging the structure, affecting the placement of emergency overflows. “Some of the existing buildings weren’t designed like they are today, so you have to work with the existing drains and make sure you can take care of the water through emergency overflows if any drains should get clogged,” he says.

After the insulation was installed, the 20,000-square-foot low-slope section was ready for the Polyglass three-ply, self-adhered modified bitumen roof system. Elastoflex SA V, a self-adhered SBS modified bitumen membrane, was used for the base and interply sheets. The surface layer consisted of Polyfresko G SA, a white, self-adhered APP modified bitumen cap sheet manufactured with CURE Technology, a thin-film technology designed to improve the membrane’s durability, UV and stain resistance, and granule adhesion.

“What we like about the self-adhered system is that you can move on the roof quick and clean,” Portuondo says. “Sometimes the intake of the mechanical units is up on the roof, and with a hot asphalt application, you have to be careful with any fumes. That’s not a consideration with the self-adhered system. It’s very clean and very fast, especially if you are about to get a rainstorm. You can get a barrier installed very quickly on the roof as opposed to hot asphalt or a torch system.”

Once the new low-slope roof was installed, work began on the new standing seam metal roof manufactured by Englert. Tying in the metal roof with the modified roof was relatively easy, according to Portuondo, but other details were more problematic.

The last steps included perimeter metal trim and gutters. “We work closely with the manufacturers based on their inspection process and when there are certain details,” notes Portuondo. “In this specific project, there were a lot of details.” 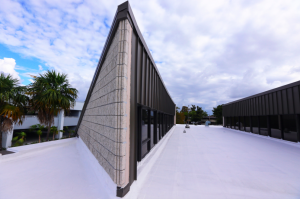 Waterproofing the skylights was tricky, as the glass extended under the metal roof and ended just a few inches from the new modified bitumen roof system. In these sections, Polyflash 2C, an odor free, fluid-applied flashing system from Polyglass, was used. Photos: Polyglass USA Inc.

Florida Building & Supply also handled repairing and painting the perimeter of the building. Hairline fractures in the concrete block walls were repaired with epoxy injections prior to painting. Crews also re-caulked and waterproofed all of the windows and skylights, including glass walls that extended under the metal roof at the top and ended at the bottom just a few inches from the modified roof system.

“That tie-in was very difficult because by the time you ended your base flashings for the modified, you were right at the glazing,” Portuondo says. “For those areas, the only solution was the Polyglass Polyflash 2C kit.” Polyflash 2C is an odor free, fluid-applied flashing system that is UV-stable.

Setting up the plan of attack in advance was crucial, notes Portuondo, but with any older building, you have to be ready to adapt as the job progresses. “You don’t really know structurally what you’re going to run into until you start to tear off,” he says. “Sometimes what you find under the roof turns out to be different than you expected, and you have to make changes in the field.”

Safety is always the top concern for both employees and members of the public, notes Portuondo. “We moved the playground area and set up a safety perimeter fence,” he explains. “We made sure the children would not be harmed while we were installing the roof, so that was a logistical problem.”

The company is used to overcoming logistical problems. “Our forte is re-roofing existing buildings, and so they are always active,” he says. “We strive to do quality work and stay on top of everything. We’ve just been doing this for so long that we know what we’re doing.”