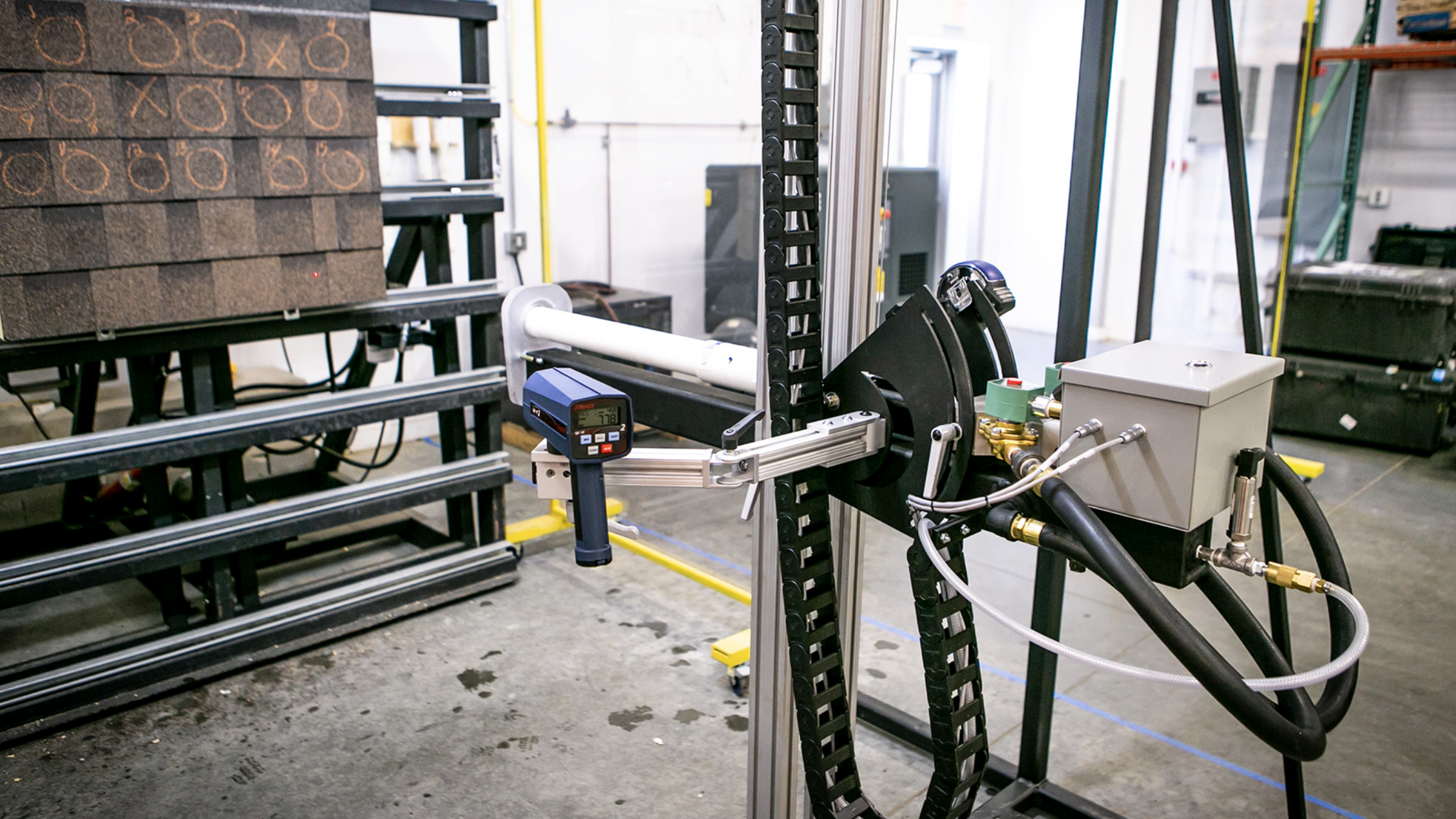 Consumers deserve to have confidence that shingles labeled as impact resistant live up to their resilient expectations. The Insurance Institute for Business & Home Safety (IBHS) has dedicated years to collecting data and identifying unprecedented insights into the performance of impact resistant-labeled shingles.

Hail poses a threat to roofs across the country. It routinely causes more than $10 billion in insured losses each year according to a 2017 WillisRe study, and those losses have been growing. Yet, hail is not well accounted for in typical construction processes because hail-resistant products are not typically required by building codes.

Impact-resistant (IR) asphalt shingles are marketed to consumers to perform better in hailstorms. Currently, those products are tested according to Underwriter’s Lab UL 2218 test or FM Approvals FM 4473 test, which use steel balls and pure water ice balls, respectively. They are based on diameter to kinetic energy relationships from the 1930s, and both tests launch projectiles at the roofing products and assume the damage severity is directly tied to the kinetic energy of the projectile. These tests evaluate products on a pass or fail basis using human evaluation to judge whether a crack has occurred, and in the case of the UL test, the damage is viewed from the backside — the side of a shingle a homeowner, roofer or insurance adjuster can’t see. Neither test, however, accurately replicates both the type and severity of damage found on rooftops after hailstorms.

Missing in the development of these test standards was an understanding of the material properties of natural hail. Historical studies had quantitative data on mass, diameter, and density, but qualitatively described the strength or hardness of hailstones. There were no quantitative hailstone strength data from which to base a laboratory test.

IBHS began laying the foundation for what would become the IBHS Impact Resistance Test Protocol for Asphalt Shingles by collecting quantitative data on hailstone properties to expand understanding of the phenomenon itself in 2012. Researchers in the field have followed severe thunderstorms and collected hailstones to measure their mass, diameters, and strength. These data provided a deeper understanding of the kinetic energy with which hailstones fall, their mass to diameter relationship, and the strength of the hail itself.

After collecting thousands of data points, IBHS was able to fill the gap in the fundamental properties of hail that would affect damage. The data revealed that natural hail is slightly stronger than pure ice and current test methods overestimate the mass, fall speed and impact energy of hail. This was a significant breakthrough in hail science.

Recreating Hail in the Lab

Armed with these new insights, IBHS researchers could begin to replicate the properties of natural hail and achieve the right impact energies in the laboratory to develop a new test for impact resistance that would produce damage representative of natural hailstorms. Seltzer water was initially used to create the density observed in natural hail. Later, IBHS and Accudyne Systems Inc. developed and patented a hail machine to mass-produce manufactured hailstones for testing. The hail machine allows researchers to configure the density and strength of hailstones to mimic the variety that occurs in natural hail.

Variations in strength and density led to the identification of three impact modes, or types of impacts, that occur when manufactured hailstones are launched at asphalt shingles. The hailstones may result in a “hard bounce” off the shingle remaining nearly intact, a “hard shatter” with the hailstone fracturing into numerous small pieces leaving no ice residue behind, or a “soft” impact where the hailstone turns to “slush” on the surface of the shingle.

The hard impacts typically caused granule loss and deformed the shingles, leaving dents and creating breaches. The soft, slushy impacts produced a larger area of granule loss, but left less noticeable deformations. These damages are reflective of damages observed on real roofs after hailstorms and may diminish a shingle’s water-shedding capabilities. Deformations to shingles can allow water to penetrate and get into the roof, which may damage the interior of a home. Loss of granules on shingles exposes the asphalt to UV radiation, which can cause them to become more brittle and prone to further damage and shorten the service life of the roof.

The IBHS Impact Resistance Test Protocol for Asphalt Shingles uses a hail cannon to launch 1.5- and 2-inch manufactured hailstones at roofing test panels. Unlike existing test methods, IBHS requires the shingles be purchased from distribution channels as a roofer or contractor would purchase the product.

The test panel follows the UL 2218 method with a 3-foot by 3-foot frame with a middle structural member to simulate the presence of a roof truss. The panel has a plywood roof deck and underlayment. Shingles are installed according to each manufacturer’s instructions. Impacts are focused on the main portion of the shingles avoiding edges, joints, corners, the outer frame and the middle structural member.

As part of the new test protocol, IBHS needed an objective tool to assess damages and improve upon the human judged pass/fail ratings of the existing test methods. IBHS partnered with Nemesis Inc. to create a cloud computing tool to measure the volume of deformations and the area of granule loss. The application runs on a computer or mobile device and uses at least 13 photos to generate gridded 3D data of the impacts. The 3D mesh allows the application to precisely measure deformations, including both the depth of dents and the height of the ridge surrounding each dent, as well as granule loss individually and in patches. The quantitative data allows for the severity of the damage to be evaluated, rather than treating all damage as equal. The third mode of damage, breach, is assessed by expert judgement to visually determine the severity level.

The initial release included eight of the most widely-sold IR shingle products on the market. As part of the release, IBHS committed to retest the products every two years and to test new products introduced to the marketplace within six months of release. In October 2019, IBHS issued an update to the performance evaluation ratings, adding three newly released products to the list.

The IBHS Test Protocol differentiates the performance of widely-sold IR shingles currently on the market by replicating the properties of natural hailstones and providing a quantitative evaluation of performance. Moving beyond pass/fail testing provides more detailed performance information for consumers looking to purchase a better performing product, roofers looking to sell a better product and manufacturers who wish to improve their products.

As hail-related losses continue to rise, the IBHS Impact Resistance Test Protocol for Asphalt Shingles and its ability to more effectively determine which shingles may be more resilient to hail will help raise the level of performance and arm consumers in hail-prone regions with more information when selecting a roofing product.

About the author: Dr. Tanya Brown-Giammanco is the Managing Director of Research at the Insurance Institute for Business & Home Safety (IBHS) and has overseen the IBHS hail program since its inception in 2010. For more information on hail research, please visit ibhs.org.

Commercial Roofs Will Be More Difficult and Expensive to Insure