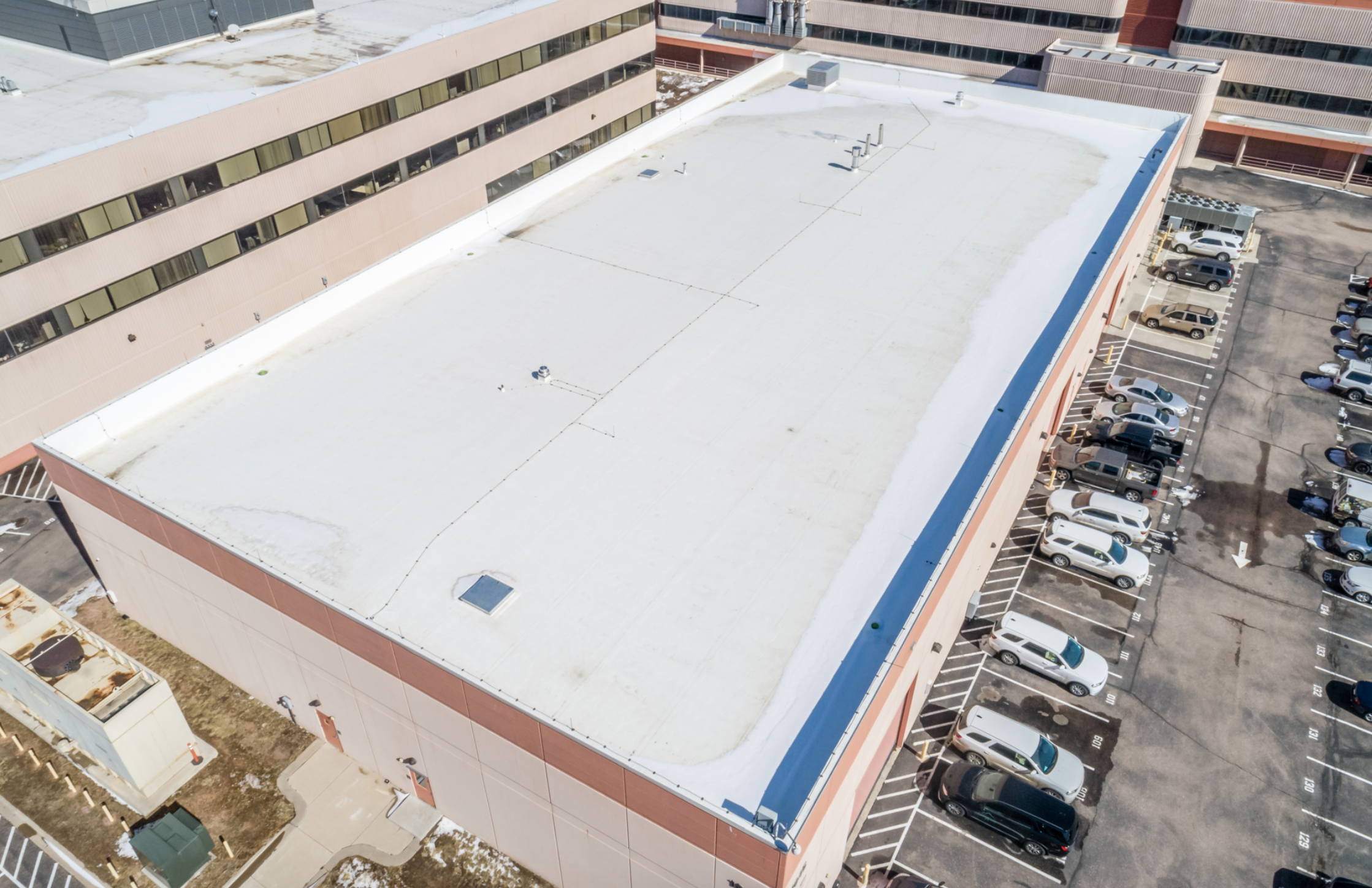 The most crucial decisions on a project are often made before work even begins. According to Ken Flickinger Jr., president of Exterior Solutions Group, that was the case with the recent Citizens Service Center re-roofing project in Colorado Springs. Owned and managed by El Paso County, the building is the primary document storage facility for the county. The building’s historic documents — some dating back to the 1800s — were under threat of damage due to an active roof leak. The existing roof also had extensive hail damage, so the roof replacement project was put out for bid.

With offices in Colorado, Iowa and Oklahoma, Exterior Solutions Group does all types of roofing work, but its focus is primarily on commercial roofing, both re-roofing and new construction. Flickinger, who heads up the location in Parker, Colorado, was definitely intrigued by the project.

The scope of work involved removing old HVAC equipment on the roof, which would be done by a separate party in coordination with the roofing contractor. The HVAC equipment was obsolete; it had been replaced and relocated a few years earlier. “It was an interesting project because there was equipment everywhere on this roof,” he says. “It looked like an automotive manufacturing plant. For us, we like those types of projects. We like ones that are a bit out of the ordinary and require a little bit higher level of project management. So, that’s what drew us to bidding the job.”

Tim Hicks, the salesperson at Exterior Solutions who sold the job, explains that the original spec called for white EPDM, with TPO as an accepted alternate. “Oddly enough, they didn’t require you to do the base bid to bid the alternate,” he notes. “We chose to just bid the TPO. We ended up being the low bidder on that, and that’s how we got the project.”

The logistics of the removal and roof replacement would be complicated, and it became obvious that access to the roof would also be an issue, as it was a high-security building. “This is a multi-story building, and the amount of security we would have to go through to enter the building and get up to the roof hatch would’ve created all kinds of problems,” Hicks explains. “So, we suggested putting a stair tower up and giving us complete access from the outside. We’d never have to enter the building. They had never even considered that option, but as we walked them through it and said, ‘This is how we’d like to set the job up,’ they replied, ‘We love it.’”

The next step involved coordinating equipment removal with the HVAC contractor. Again, a suggestion from Exterior Solutions helped increase efficiency and cut costs. The HVAC contractor’s original plan called for roofing crews to take out the roof system around the HVAC units, allowing HVAC crews to cut out sections of the steel decking below the equipment. The deck sections would have to be replaced before temporary roofs could be installed to keep the building watertight. The team at Exterior Solutions pointed out that there was no need to remove the decking. Instead, the equipment supports could be cut off as close to the deck as possible, and the ends of the supports could be buried in the insulation of the new roof system.

In the end, that’s the plan they executed. A fire watch was set up inside the building as equipment was removed. Crews from Exterior Solutions removed the existing roof to give the HVAC crews access. “We basically created a hole in the roof for them so they could see what they were doing,” Hicks explains. “We would slice the existing TPO back and take out the insulation. They would put down welding blankets in the area and then use cutting torches to cut the I-beam and L-beam steel supports off. Our roofers were on site to make sure supports were cut down to the proper length. As soon as the supports were cut off, we basically filled the hole.”

The deck was left intact, making it much faster and easier to patch the existing roof. It was critical to ensure the roof was weathertight every night to protect the documents inside the building. “We put the insulation back, we replaced the membrane, and we used an Eternabond product or welded a small cover strip around it, depending on the size of the hole,” notes Hicks.

The HVAC equipment was taken off the roof with a crane. Once the equipment was removed from one side of the roof, crews began installing the new system.

With the equipment gone, the rest was clear sailing. “In all honesty, the roof was easy,” Flickinger says.

The existing roof system was torn off down to the deck and a TPO system from Johns Manville was installed. New polyiso insulation was topped with a fully tapered system to ensure proper drainage. After DensDeck cover board was installed, the 60-mil TPO membrane was adhered into place.

“We worked from one side to the other,” Hicks says. “The high point of the roof with the tapered system was in the center, and water is pushed to both sides where there are internal drains and overflow scuppers. We started at the low point and roofed up the hill to the center on one side, and then turned around and did the exact same thing on the other side.”

Details were minimal — just a few penetrations and a curb around the roof hatch. The edge metal installed was the Anchor-Tite system manufactured by Metal-Era. “We offered an upgrade on the metal edge,” notes Hicks. “Instead of a shop-fabricated metal edge, we recommended Anchor-Tite all the way around. After all, the area is subject to high winds. We felt that was a better way to go.”

The TPO system installed was ideal for the project, according to Flickinger. “I’ve been a thermoplastic guy my entire career,” he says. “I’m a big believer in heat-welded seams. We thought the heat-welded seams and adhered walls offered a better approach. We think it’s a very good-looking roof, and with the addition of a cover board — which the original roof didn’t have — it would definitely improve its hail performance.”

Hicks credits the manufacturer for assistance on the project. “Manville was very supportive,” he says. “They were local, and their technical support is excellent. We thought that for a project like this, to have a partner who was right there with you was important.”

The project was completed in less than a month, and Flickinger believes the key to executing the job efficiently was the decision to set up the stair tower. “That was the suggestion of our project manager,” says Flickinger. “Our company likes using stair towers, especially when we’re talking about long ladder runs. For us, it’s partly about safety for our own people, but because the building was secured, and as they talked to us about the steps we would have to take on a daily basis to just get access to the roof, we realized it was just going to kill us on production. We were going to waste so may man-hours on a weekly basis just getting to and from the roof. That was one of the driving factors that got the owner to agree to the stair tower, and we got a change order for it.”

The cost of the change order was minimal compared to the time and money it saved. “We have some really bright people,” says Flickinger. “They are all really good at looking at something and seeing if there is a better way. One of our strengths is we are really good at creative solutions, whether it’s something as simple as avoiding the grief of going through a secured building or taking a step back and asking, ‘Why cut holes in the deck? Why can’t we just cut these supports off above the deck because we are burying them in 6 inches of insulation anyway?’”

“The other piece for us is that we focus on the safety side of it, not only for our own people, but also the site safety and the safety of the people inside the building,” Flickinger continues. “We are very aware of that as we set our jobs up and decide where to set our materials and those types of things.”

The last component of a successful project is top-quality workmanship. “We focus on doing it right the first time,” Flickinger says. “Getting that customer satisfaction, not only at the end of the job with a great roof, but also during the project by trying to minimize the pain that an owner typically goes through in a roofing project, that’s one of our strengths that this project demonstrates.”