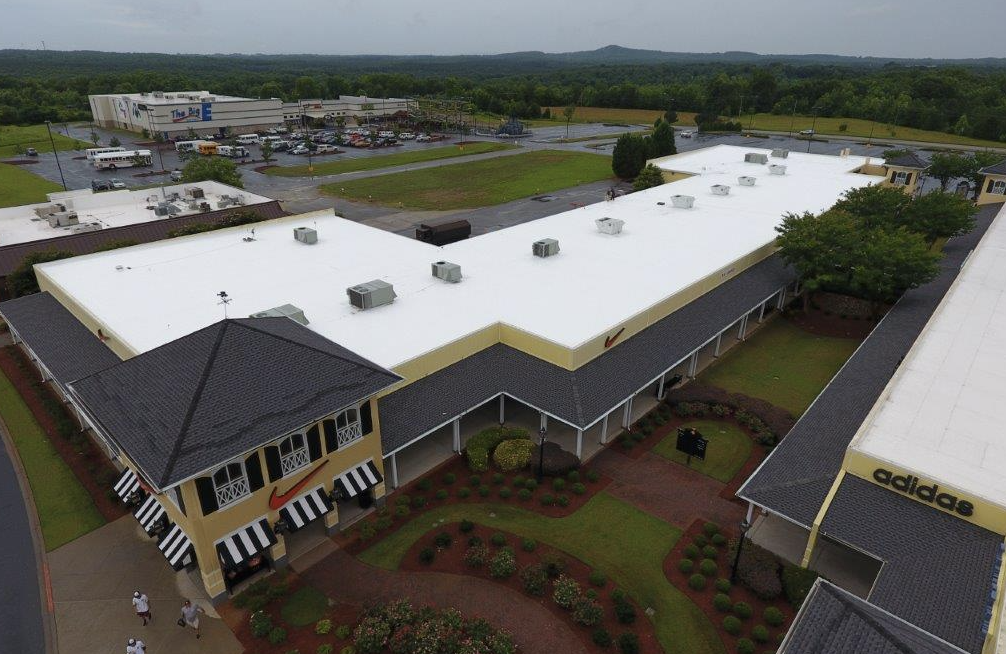 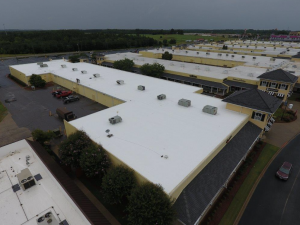 Headquartered in Atlanta, Peach State Roofing Inc. has 15 branches and covers clients across the nation. The company specializes in commercial and industrial roofing, and excels at large-scale single-ply jobs. The goal of every branch is to provide the same level of service for clients no matter where they are in the country, as exemplified by a recent project at a large retail mall in South Carolina.

Peach State’s Charlotte branch is located in Rock Hill, S.C. The company has re-roofed three of the five roofs at Gaffney Premium Outlets in Gaffney, S.C., including two roofs completed this year in just two weeks. Anthony Wilkerson, the branch manager, and Blake Wideman, strategic accounts, shared their insights on the project.

Peach State’s Charlotte branch focuses primarily on re-roofing, service and maintenance work for existing customers and property managers. Most of the company’s work involves TPO, EPDM and PVC, but crews have to be able to handle almost every type of system on the market. “If there is a hotel with some shingles or metal on it, we want to be able to complete every facet of the job, but most of our work revolves around single-ply roofing,” Wilkerson states. “We are certified with every major single-ply manufacturer.” 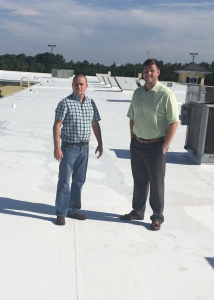 According to Wilkerson and Wideman, Peach State’s strength lies in building relationships with its clients by providing quality workmanship and excellent customer service. “We do that through our project management, our expertise and our training,” says Wilkerson. “We put a lot into training our employees so that they know how to do the technical details that the manufacturers are asking for.”

Wilkerson believes Peach State offers the best of both worlds—flexibility at each branch and the depth of knowledge from the large corporate organization. “We’re independent, but I work with the corporate office every day,” says Wilkerson. “We have local representation around the country, but at the same time we have that teamwork, so you’re still getting the same quality from each office that you’re getting from the corporate office. We try to be as close to the way Atlanta does things—the Peach State Way—all across board, all over the country.”

Landing a Big One

In the case of the recent project at Gaffney Premium Outlets, the work was an outgrowth of the company’s previous successful projects, including a re-roofing job at the same complex last year. “Our bid was what they were looking for,” Wideman says. “We gave them the price they were looking for and the quality they wanted. That’s how we were awarded this project.” 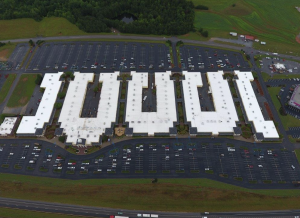 This aerial view shows the five buildings of the Gaffney Premium Outlets mall. Peach State Roofing re-roofed the two buildings on the left this year, after completing work on the building at the far right last year.

The mall is made up of five buildings, and the company re-roofed two this year totaling approximately 75,400 square feet. Peach State installed a mechanically attached TPO system from Firestone over the existing modified bitumen roof system. “We came up with a plan to cover the old roof with a half-inch high-density cover board,” Wilkerson says. “Then we mechanically attached a Firestone 60-mil white TPO system over the cover board.”

The system was chosen for its durability, according to Wilkerson. “They were looking for a long-term solution,” he says. “We went with a re-cover because it was more cost-effective for their budget, but we could still offer them the same warranty and the same guarantee that the system would be just as effective if they had torn the old system off and started from scratch.”

The company used 8-foot rolls of TPO on the project for several reasons. “We went with 8-foot rolls on this project because it was easier to apply the rolls,” notes Wilkerson. “They are not as heavy as the 10-foot rolls. It’s easier to let the rolls relax when you roll them out and easier to keep them tight when you are securing them to the deck.”

Fasteners were installed every 12 inches on center at the edge of the TPO sheets, and the next sheet was heat welded over the top of the screws and plates, and then mechanically fastened at the other end.
Extra care had to be taken with the details, especially walls and curbs. “We tore all of the old membrane off the curbs and off the walls, and we used bonding adhesive to go up the walls,” Wilkerson explains.

Curbs were handled in a similar fashion. “With the curbs, you run the field sheet right up to the curb, and then you mechanically attach it 12 inches on center,” Wilkerson notes. “Then we use bonding adhesive to install a piece of membrane on each side of the curb. We don’t do one piece and wrap it all the way around. We use four separate pieces, and we adhere them to the curb. Then we heat weld those pieces to the field sheet. For the curbs, we use a flashing that goes underneath the curb itself, and we attach that 12 inches on center all the way around. That lets the water shed over the HVAC unit and then down onto the membrane past the flashing, so there’s nowhere for the water to penetrate.”

The sheer size of the project was a challenge, but Peach State is used to handling large-scale projects. Logistics and scheduling were also demanding due to customer activity at the mall. “It was a good project for us, but I’d say one of the biggest challenges was that the mall remained open the whole time we were doing the roof,” Wilkerson says. “We had to check in with each tenant in every building to make sure everything was OK from the night before.” 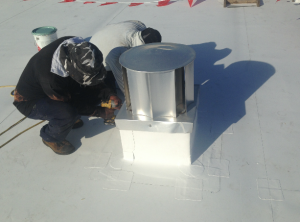 Extra care had to be taken with the details at walls and curbs. Bonding adhesive was used to install a piece of membrane on each side of the curb. Then those pieces were heat welded to the field sheet.

The project called for roofing specific sections each day to make sure the roof stayed watertight at all times. “We sealed the roof up every night 100 percent, so if it rained in the evening, it had to be like we had never been up there,” Wilkerson recalls. “If we took three air conditioners apart in a section that we did one day, at night before those guys went home the air conditioners were wrapped back up, the flashing was put back around the air conditioner and all of the edges of the roof were sealed to the old roof so everything was watertight.”

Safety was also a concern, especially with pedestrian traffic below. “We had to make sure all of our safety procedures were in place for our crews and for the members of the public going in and out of the doors,” Wilkerson says.

Staging was complicated, but luckily the jobsite offered ample space for trucks and cranes to be moved between the buildings. The key was to tackle high-traffic areas early in the morning and move to less busy spots as the day wore on.

Proper staging is crucial to jobsite efficiency, notes Wilkerson. “We like to stage the material as we put it on so we’re not dragging it across the roof,” he says. “It’s all right there for them, laid out as they go.”

Support and teamwork are essential up and down the line. “We work really well as a team, so if anyone has any small questions, they can ask the superintendent and call me, so we can make sure we take care of it the Peach State Way.”

The project went off without a hitch, says Wilkerson. The mall traffic was never disrupted. “Not one leak, not one complaint on this project,” he says. “Our project management on this project was spot on. Our superintendents held their own out there. And our guys—it’s the attention to quality and all the time we put into training our guys that allows them to do this and make it look almost seamless. It’s one of those situations where you want it to look easy while you’re doing it, but when you’re in the mix of it and you’re trying to get it all done, it’s not as easy as it looks.”

Customer service was crucial. It wasn’t just the property management company that had to be kept informed—it was each individual retailer in the building. “There were so many people to deal with,” notes Wideman. “Every manager of each of those units had to be kept informed of the process. Roofing is not as hard as people think, but keeping up with the owners, keeping people happy, letting people know ahead of time what’s going on is a big challenge. We had to make friends with everyone ahead of time and let them know where to call with any questions.”

“The project, as far as roofing goes, was pretty straightforward,” concludes Wilkerson. “The key is to keep up with everyone on a daily basis and let them know what’s going on so if there is a small problem, it doesn’t keep brewing until it’s a big problem.”