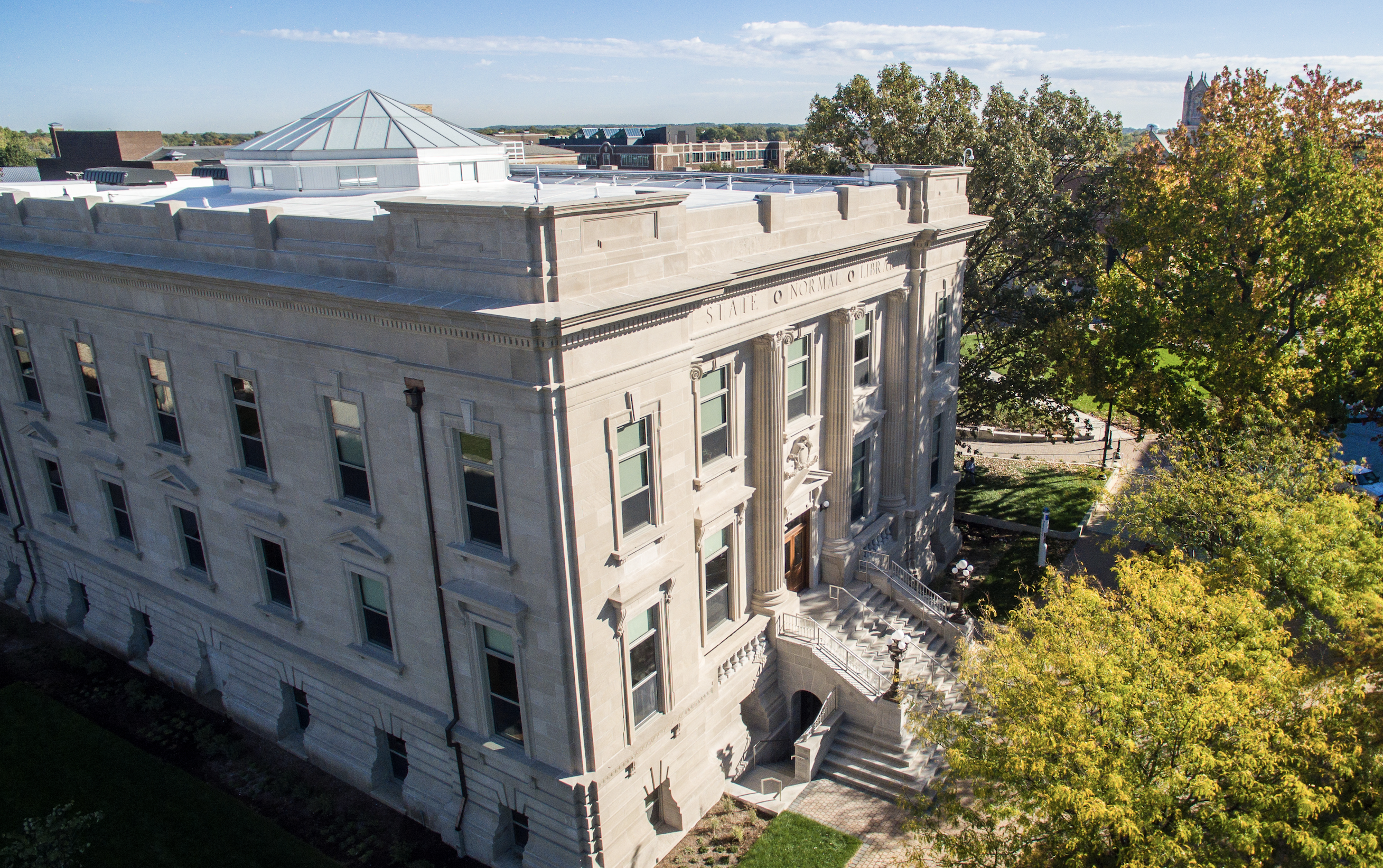 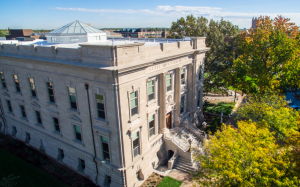 The State of Indiana approved a $16 million renovation project that restored Normal Hall to its former glory. This photo shows the exterior after the renovation was completed. Photo: Indiana State University

Completed in 1909, Normal Hall is the second oldest surviving building on the Indiana State University campus in Terre Haute, Ind. Since then, Normal Hall has undergone multiple renovations, including an addition added in 1957. But by 2010, the grand neo-classical building was largely unoccupied and falling into disrepair. The hall maintained its perch at the center of campus, but years of service to its tens of thousands of students had taken their toll.

“We try to preserve the history of ISU here on campus,” says Seth Porter of ISU facility management. “But between roof leaks and other issues, it was becoming an eyesore.” So, the State of Indiana approved a $16 million renovation project and partnered with architectural firm arcDESIGN to bring the building back to life.

“This renovation will return Normal Hall to its rightful place in the center of campus life,” says ISU President Dan Bradley. “The project will provide a valuable new resource to students while preserving and re-energizing a significant historic structure in the heart of campus.”

Aside from the stately Indiana limestone, the building had to be redone from the foundation to the roof. And the history that makes Normal Hall special also made for unique challenges in the design and renovation process.

“People will say, ‘They don’t build them like they used to,’” says Greg Miller, project manager from arcDESIGN. And in many cases, “It’s a good thing they don’t!” 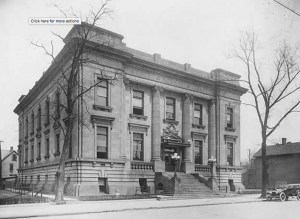 Normal Hall has undergone multiple renovations since it was completed in 1909, but by 2010, the neo-classical building was largely unoccupied and in need of major structural repairs. Photo: Indiana State University Archive

Normal Hall was originally designed for and used as the university’s central library. At that time in history, after the Civil War and before the 1920s, libraries were built in a certain way. Due to open flames of gas lighting and unreliable supply of electricity, indoor lighting at the time could have been dangerous to a library’s collection. So, libraries were designed to maximize natural light, with plenty of windows, skylights, and even glass floors. Instead of structural walls, Normal Hall’s six levels of bookshelves—or “stacks”—were designed to be structurally self-supporting, independent of the rest of the building.

Miller led the design team through the challenging process of removing the six-level stacks and replacing them with four new floors for offices and building systems. A portion of the stacks system was salvaged and reconstructed, providing the same view patrons would have had more than 100 years ago.

During construction, crews discovered unstable structural conditions on the north side of the building adjacent to the original six-story stacks system. The entire exterior wall had to be removed and replaced, all while supporting the existing attic and roof nearly 60-feet above the ground floor.

“It was a monumental feat,” Miller says. “It was a great example of teamwork by Indiana State University, design consultants and the contractor.” 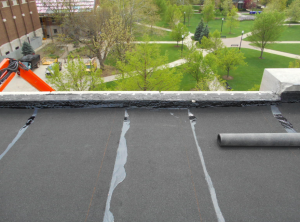 “ISU has a strong commitment to the environment, and we were able to help them achieve their performance goals while also contributing to LEED credits with our environmentally-conscious products,” explains Rick Ryherd, area manager for Garland.

The largest—and brightest—rehabilitation involved the stained-glass dome atop Normal Hall. The original dome had deteriorated so extensively that, by the middle of the 20th century, the remaining glass panels were completely removed and the dome was completely hidden. A suspended plaster ceiling sealed off the once grand rotunda. “Imagine just a skeleton, an empty dome with only the ribs visible,” said Miller.

The dome restoration began with historic photos, documents and forensic analysis. The glass art featured distinguished educators and philosophers. Some of the original stained-glass panels were recovered from the building, whiles others had to be recreated. Conrad Schmitt Studios, in Wisconsin, restored the stained glass to its former glory. With the stained glass restored, rehab on the rotunda continued. Inside Normal Hall, the rotunda mural was restored and more than 140 light bulb sockets were re-wired to light the dome. Above the dome, a new 40-foot octagonal skylight was installed, along with supplemental lighting. Below the rotunda, 20 original columns that stretch through the open hall were restored with scagliola and paint finishes.

The crew worked to save original hardware and finishes that hadn’t already been lost to time. They were able to restore and replicate plaster moldings and cornices, save original wood doors and casings, and restore the grand marble and bronze staircase. “The general contractor did a great job preserving the historic detail with the extra time they put into restoring this building,” notes Porter.

The Future of Normal Hall

With all the time and effort put into preserving the history, the team did not forget to focus on the future of Normal Hall. The team, starting with arcDESIGN, incorporated the old and the new seamlessly. 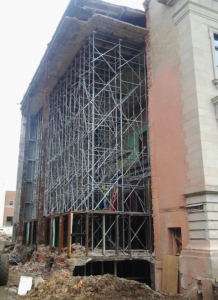 The north exterior wall had to be removed and replaced, so crews constructed a 60-foot-high temporary structure to support the existing attic and roof. Photo: Greg Miller, arcDESIGN.

For starters, Miller said the design was intended to respect but not imitate the building, which is listed on the National Register of Historic Places. Rather, he said, “the design clearly communicates original versus new construction to patrons.” Miller consulted experts from the team, from historians to a representative from the roofing manufacturer to gather the full scope of the project.

Today, the original stately limestone structure is accentuated by the addition, comprised predominantly of glass and Indiana limestone. The addition houses functional requirements such as stairs, elevators, restrooms and mechanical services, maximizing use of the historic interior spaces.

The renovation was planned and constructed to achieve LEED Certification by the USGBC. Renovation included new HVAC systems utilizing the university’s existing central steam heating plant that runs on natural gas. LED lighting throughout is an energy efficient replacement for the building, originally built with combination gas and electric light fixtures.

Re-dedicated in October 2015, Normal Hall is back in action at the center of campus as home to the university’s Center for Student Success and numerous tutors, counselors and mentors. Below the rotunda, more than 100 years after the building opened its doors, students gather in the university Reading Room and Gallery modeled after the original hall when it opened to students in 1909.