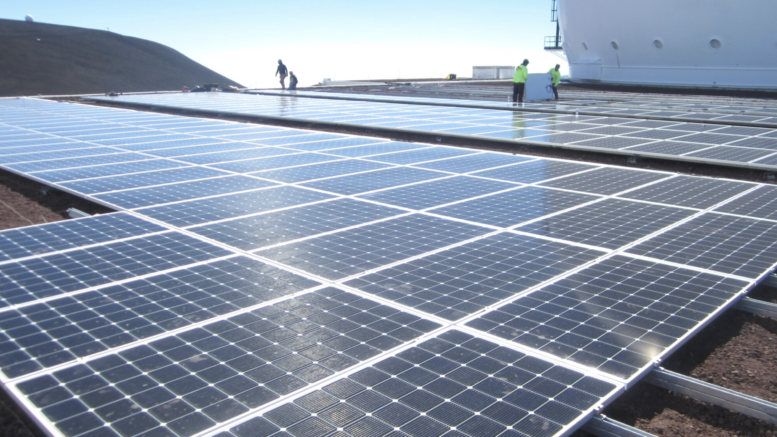 Chances are, you will never have to install a solar voltaic system on the slope of a dormant volcano, at an altitude of almost 14,000 feet, taking care to place the system’s panels on an existing ballasted roof, avoiding snow and ice that can fall from the domes protecting the nearby 300 pound astronomical telescopes.

That was the challenge that faced Mark Devenot, infrastructure specialist at the W.M. Keck Observatory, atop Hawaii’s tallest mountain, Mauna Kea. The observatory is the home of two telescopes that attract astronomers from around the world “to observe the universe with unprecedented power and precision.” The location of Mauna Kea in the middle of the Pacific Ocean, with no nearby mountain ranges and few city lights polluting the night sky, makes it ideal to visually explore the far reaches of space.

Those conditions also make it an ideal location for a solar installation. Four years ago, a solar array was installed at Keck’s headquarters, two hours down the mountain at the base of Mauna Kea. Inspired by the success of the installation at headquarters, Devenot began to ponder the feasibility of installing a solar system at the summit of Mauna Kea. Overcoming a wide array of challenges, both natural and man-made, Devenot and his staff completed the installation of a 137 kilowatt solar system at Mauna Kea in December of 2020.

While it is an understatement to say the challenges faced by Devenot were unique, his experience with solar power holds some lessons for anyone contemplating putting solar power on a new or existing roof.

Installed more than 30 years ago, the existing EPDM roof on the building that supports the Keck I and Keck II telescopes was held in place by cinder ejected thousands of years ago from the dormant volcano. This ballast was abundant, nearby and, according to Devenot, had other attributes that made it ideal. “The roofing ballast is from onsite graded overburden, which inherently has sufficient density to stay in place with expected wind loads of the mountain conditions. It also perfectly matches the site’s surroundings in thermal color, making it ideal for telescope optical performance.”

In order to design a foundation for the solar panels, some of the ballast needed to be removed, first very methodically by hand and then using a mini excavator to clear the sections of the roof that would support the PV system.

After careful inspection of the EPDM membrane, inspectors said it “appeared brand new” and they left the existing membrane in place. Then 332 solar panels were strategically placed on the 20,940-square-foot roof, carefully positioned to avoid snow and ice fall from the domes. The ballast was replaced after the solar system was installed.

“One of the biggest challenges was attaching the PV array to this type of roof, which has no structural framework to anchor the system,” notes Devenot. This meant designing a one-of-a-kind solution to create a customized PV roof racking system. “The racking system is made up of hundreds of large, heavy 1/2-inch steel plates interconnected to a framework of strut materials which the PV modules are clamped to.”

Today, the system is producing approximately 10-15 percent of the observatory’s electrical power, helping to carry out its commitment to reduce the organization’s carbon footprint and lower the cost of energy.

So, what does a successful installation of a PV array on a mountaintop in Hawaii have to do with down-to-earth considerations of generating and using solar power? For the roofing industry, how will it prepare to meet the needs of increasing number of customers who want to mount solar equipment on the roofs they produce?

Rooftop solar power has been in use since the 1970s. Now various forces are finally converging during the 2020s to make it an attractive choice, both environmentally and financially. While interest in solar took what one observer has called a “time out” during the Trump administration, the Biden administration is reversing course and proposing significant economic support for companies that choose to incorporate solar into their building plans.

While the administration’s legislative agenda with its centerpiece “clean energy standard” is still being shaped by various forces on Capitol Hill, the White House is carrying out its support for solar through other federal channels. The Department of Energy has announced a goal to cut the cost of solar power by 60 percent within the next ten years and plan to spend nearly $128 million to lower costs, improve performance, and speed the deployment of solar energy technologies. The Department estimates that by 2035, solar PV could represent between 30 and 50 percent of electricity supply.

Much of the current action around solar is driven by the Solar Investment Tax Credit, which defrays 26 percent of solar-related expenses for all residential and commercial customers. However, after 2023 the tax credit will be lowered to 10 percent for commercial installers. Given this incentive to act relatively quickly, according to the Harvard Business Review, commercial sales of solar “will probably burn even hotter in the coming months, as buyers race to cash in while they still can.”

Other forces are converging to bring the use of solar power to the forefront, and to make it a feasible choice to generate power in a broad range of climates. For instance, while storage of power generated by solar panels was an issue for years, negatively impacting the use of solar power, the storage problem has been solved, and will most likely be further improved to meet market demand. The companies that make electric cars — primarily Tesla and Mercedes Benz — are leading the way on this effort. Batteries are available that will store power from your solar array, ready to be used during times of peak demand (and expense) and able to store power purchased from the grid during slack times.

For roofers, this renewed interest in solar — and financial support for it — means being able to offer roofing systems that can support a solar array, and provide a setting where solar panels can be maintained in top condition. In general, any roof that is supporting overburden, whether it is vegetation or solar panels, should clearly be thick and durable.  Solar panels will need maintenance and repair, and their placement on a roof must allow for access in case of fire. Roofing-related code provisions increasingly acknowledge this need and require that sufficient space be left between groups of panels to allow for emergency access for people and equipment. Any roofing membrane installed under a solar system needs to be durable enough to withstand this traffic, as well as scheduled maintenance.

Much has been written during the last decade in the “black vs. white” roof color debate. Interest in solar will no doubt impact this debate. With much of a roof covered, the color of the membrane and any potential benefit from reflectivity can be negated. In fact,energy conservation codes in Zones 1 through 3 generally exempt roofers from meeting the requirement for reflective roofing, in what is described as “overburden” exemptions. Under model codes, relief from the requirement for the entire roof can be met by covering up to 75 percent of the roof with PV, vegetative systems, walkways or any combination of these elements. In essence, the code is already acknowledging the fact that in these instances, color doesn’t matter. Jason Wilen, Senior Associate II at Klein & Hoffman, says, at that point, “Pick the membrane that makes the most sense and don’t worry about what color it is.” Given this leeway provided by energy conservation codes, the durability and longevity of black EPDM argues strongly for its use.

As for that EPDM membrane helping to support a PV system high on a mountain above Hawaii, it is going into its fourth decade of service, contributing to a lower electricity bill for unmatched world class research into our galaxy and beyond.

About the author: Louisa Hart is the director of communications for the Washington-based EPDM Roofing Association (ERA). For more information, visit www.epdmroofs.org.

Install EPDM in Temperatures from 20 to 120 F

Horsepower Has a New Meaning on Historic Roofing Project