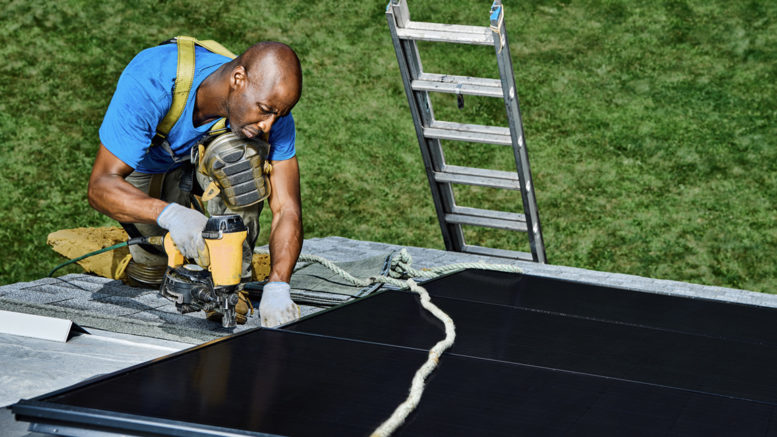 Clean energy has been in the news a lot lately. That’s partly because it’s a major focus of the conversation and policy from Congress and the Biden Administration. Traditionally, clean energy is not a subject that the roofing industry has needed to pay attention to — but that’s about to change. A bill recently introduced by Representatives Mikie Sherrill (D-NJ) and Bill Pascrell (D-NJ) in the House and Senator Jon Ossoff (D-GA) in the Senate has the potential to provide a significant shot in the arm for the roofing industry.

The bill, the RAISE the Roof Act, which stands for Revamping Appropriate Incentives for Solar Energy, clarifies and expands the solar investment tax credit (ITC) to include integrated solar roofs. This move would maximize the positive climate and economic impacts of the next generation of solar energy technology.

Many roofers may not have ever heard of the ITC — but it’s the most important solar policy ever passed. Since its passage, the solar industry has grown 10,000% and added hundreds of thousands of well-paying jobs to the U.S. economy. The ITC has also enabled millions of homeowners and businesses to install solar cost-effectively, save money on their utility bills, and reduce carbon emissions. But, the ITC must be modernized to keep pace with innovations in the solar sector like the rapid advancement of integrated solar roofing and other cutting-edge technologies.

Up until now, residential solar hasn’t been connected to the roof — instead, it sat on top of the roof. However, innovations in solar have come in module efficiency, racking technology, financing, and software, and they have created an ever more compelling residential solar product over the decades.

But now, the most promising solar innovation is in building-integrated photovoltaic technology, or BIPV. With BIPV, solar is incorporated into building materials and architectural structures. Solar roofs are a prime example of BIPV and illustrate how the solar industry is evolving.

With solar roofs, the solar is inseparable from the roofing materials instead of being mounted on top of the roof. For example, the solar laminate can be applied to the form of a shingle rather than a large, rigid panel that requires an external rack. Solar roofs are simply better clean energy solutions: they deliver the same financial and carbon-free electrical benefits as non-integrated solar but are easier to install, more aesthetically pleasing, and more durable and reliable when it comes to waterproofing. Integrated solar roofs are a win-win for homeowners, addressing a need for a new roof and satisfying a desire to help the environment by generating clean energy.

Solar roofing is roofing and will be installed by roofers. A policy that values the solar roof will help local roofers across the country as they move into this new sector of the industry — and grow their businesses in the process.

Solar roofs are good for the world as well. The opportunity to encourage clean energy adoption via roof replacements is enormous, and the potential positive impact on the climate crisis is significant. By some estimates, fossil fuel use associated with residential and commercial buildings accounts for 29% of U.S. greenhouse gas emissions. Deploying integrated solar roofing will play a key role in reducing our carbon footprint and achieving the ambitious goals set by the Biden Administration of reaching net-zero emissions by 2050.

More than five million roofs are replaced in the United States each year, and if we can convert just a fraction of those roof replacements to solar roof installations, the country could nearly double its rooftop solar capacity in two to three years, creating clean energy jobs here at home. Roofing contractors across the country can play an essential part in this growth.

If America is to be a global leader in the solar industry and the fight against climate change, it must implement forward-thinking policies that will spur the creation and deployment of solar innovations. That innovation can renew American solar manufacturing as well. Earlier this year, GAF Energy announced the build out of a solar roof manufacturing facility in San Jose, California. And Tesla produces its solar roof product in Buffalo, New York. Leading on solar roofs will create the opportunity for the United States to lead on manufacturing as well.

The RAISE the Roof Act offers a unique opportunity for the roofing industry. It levels the playing field and will allow solar roofs to grow, by allowing the entirety of an integrated solar roof to be covered by the investment tax credit and eliminating confusion and red tape that currently exist. It also would allow consumers to expense roof repairs and replacement that is sometimes necessary for solar installation.

RAISE is a clean energy policy that works for roofers — and would put roofers to work.

About the author: Martin DeBono is the President of GAF Energy. He previously headed SunPower’s residential North American business and global commercial business and served as President of SunPower Capital. He has held sales and marketing positions at various high technology companies including Cisco, Siebel, Insightful and Pure Networks. DeBono is a decorated naval submarine officer and holds degrees from the University of North Carolina (BS) and Harvard University (MBA). For more information, visit https://www.gaf.energy.

Be the first to comment on "RAISE the Roof Act: A Solar Bill That Works for Roofers"