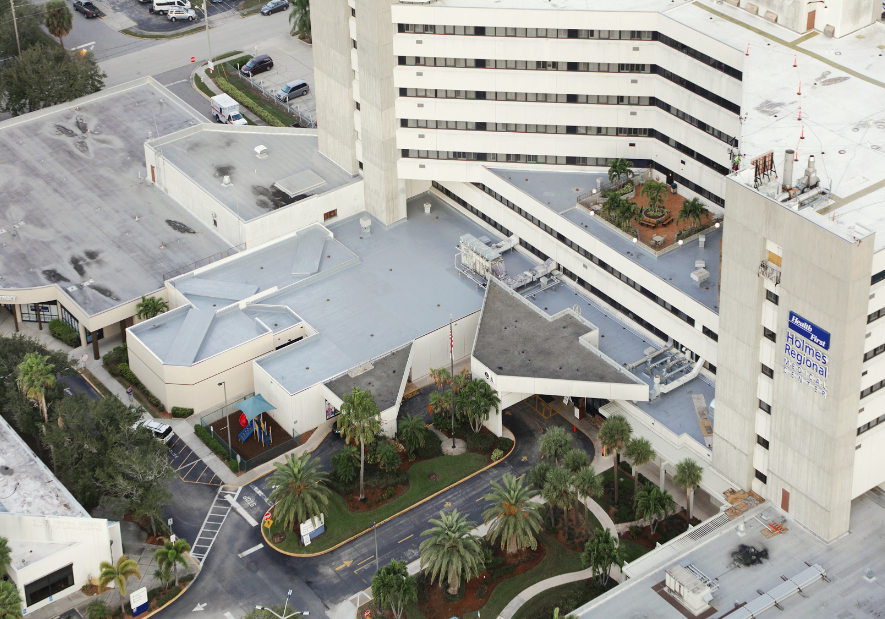 When leaks on the existing roof on the Holmes Regional Medical Center in Melbourne, Florida, became too much to bear, the need for a new roof on four levels of the building was obvious. But so were the numerous difficulties posed by removing and replacing the roof on an active hospital. To make matters more complicated, the areas affected were directly over the hospital’s main entrance and the neonatal intensive care unit (NICU), which cares for premature infants.

It would take a talented team of roofing professionals using the right products to install a durable roof system without disrupting patient care. Advanced Roofing Inc. was up to the challenge.

Advanced Roofing is a full-service commercial roofing contractor based in Florida. The company’s corporate headquarters is in Fort Lauderdale, with offices in Sanford, Tampa, Miami, Jupiter, Fort Myers and Jacksonville. According to Jason Carruth, branch manager of the Sanford location, the company installs almost every type of low-slope and steep-slope roof system. “We do production, service, maintenance — anything to do with commercial roofing,” he says. “Our specialty is re-roofing occupied buildings.”

For Holmes Regional Medical Center, a two-ply modified system with a reflective coating from Tremco was specified. This was an ideal fit for the re-roofing application at the hospital, notes Carruth, as it was a cold-applied system with low VOCs. “As a certified Tremco applicator, we were invited to bid on the project, and we were successful with the contract,” says Carruth.

The project involved the complete tear-off and replacement of the roofs on the four lowest levels of the hospital, totaling approximately 32,000 square feet. These included two of the most sensitive areas on the building. “We did the whole section over the main entrance where everyone drops people off,” notes Carruth. “Another section was directly over the NICU center. We did the staging and handled personnel coming in and out on four roof levels over that area. The entire roof section also surrounds an open-air atrium below, so we had to roof around not only the main entrance, but an atrium as well.”

Safety was the top priority, both on the roof and on the ground. “We had to have full-time supervision on the ground,” Carruth says. “We had ground safety monitors that worked for us, and they had to coordinate traffic at the drive-through and the turnaround, as well as the pedestrian walkway, which was right at the edge of our staging area.”

The site posed numerous challenges, as the lone staging area was limited and the schedule was subject to change at a moment’s notice due to emergency surgeries. “Work over the NICU unit was a little more involved due to the fact that we were almost continually on call,” Carruth explains. “On days we were able to work, we had to be ready to stop if there was anything critical going on.”

Work began in the areas with the most problems. “We started in different sections based on the priorities of the hospital,” Carruth notes. “We initially focused on the areas where the leaks were the worst.”

After the problem areas were fixed, work proceeded in sections, working from the back to the front to minimize traffic on completed areas. The process involved tearing off the existing built-up roof down to the concrete deck and installing a temporary roof to keep everything watertight. Then tapered insulation was applied in cold adhesive, followed by a cover board and the two-ply smooth modified system. The last step was the application of the Alpha-Guard MT coating, which was set in a polyester mat.

Logistics, loading and disposal of debris was a complicated process, as crews could only load the roof at one point accessible to a telehandler — a 10K Lull. This meant much of the material had to be moved a long way across the roof. “We had to haul all of the material and all of the debris from the old roofs across a level, down a level, and up a level to one spot,” Carruth explains. “Mobilization was a little bit difficult on it because we were only allocated one staging area.”

Advanced used a 10-man crew on the project, doing most of the demolition work at night and installation work during the day. The fall protection plan included Raptor tie-off carts and anchor points at higher levels of the building.

Mechanical roof cutters were used to tear off the existing built-up roof. In some sections, lightweight concrete also had to be removed. Debris was placed in a custom-fabricated trash box with a lid that had special forks for use with the telehandler. “We cut the old roof into small sections and just used hard elbow grease to pop them off the bottom,” Carruth says. “We utilized a Lull and a trash box to dispose of the that debris, driving it over to the dumpster, which was in the parking lot.”

After the temporary roof was installed, tapered insulation was set in a low-rise foam adhesive. This was topped with half-inch Securock cover board and the modified sheets. The two-ply Tremco system consisted of a PowerPly HD base sheet and Composite Ply HT top sheet, both set in PowerPly adhesive. Before the coating was applied, all of the edge metal and trim were installed. “We put all of flashings in, put all of the sheet metal on, we put the counterflashing in,” notes Carruth. “All metals were installed on this project were stainless steel, as it was in Melbourne and pretty close to the coast.”

The system supplies the benefits of solar reflectance, which include lowering the roof temperature and minimizing utility costs, but the roofs also had to be aesthetically pleasing. “There are patient rooms that look down in this roof, so that’s why we went with the light gray coating, which still supplies the necessary SRI [Solar Reflectance Index] value,” Carruth points out.

The work areas also necessitated other considerations for patients and staff. “We had guest rooms where we had to hang tarps up so people couldn’t see us working at the time,” notes Carruth. “There were passive air louvers that we had to cover to keep debris from the tear-off from getting inside the building. We also had to put charcoal filters in all of the air intakes.”

The work schedule could change on a moment’s notice, so the roofing crews kept in almost constant contact with facility managers. “We’d provide them with a weekly schedule and every day we let them know where we would be working and what we’d be doing. If anything changed, we’d hear about it from their facility people and adjust on the fly.”

The project was completed on time, despite numerous weather delays and interruptions because of surgeries in the NICU. “The communication between the manufacturer’s rep, the owners and ourselves was excellent,” Carruth says. “Pre-planning is everything. When the key players on a job are all on the same page, that’s when a project ends up being successful.”

Success on this project meant protecting the patients and pleasing the owner with a top-quality system. The roof system was designed for high-priority, high-sensitivity projects, and there are few areas that are more sensitive than a neonatal intensive care unit. But these types of projects are familiar territory for Advanced Roofing.

“This is what we do. We re-roof occupied buildings,” Carruth says. “Not only are we putting on a roof system, we’re dealing with customers, we’re watching the weather forecast and making sure the roof is always watertight. The experience Advanced has roofing occupied building is why Tremco and Holmes selected us for the project. We know how to handle those situations and keep the roofs watertight on a daily basis.”