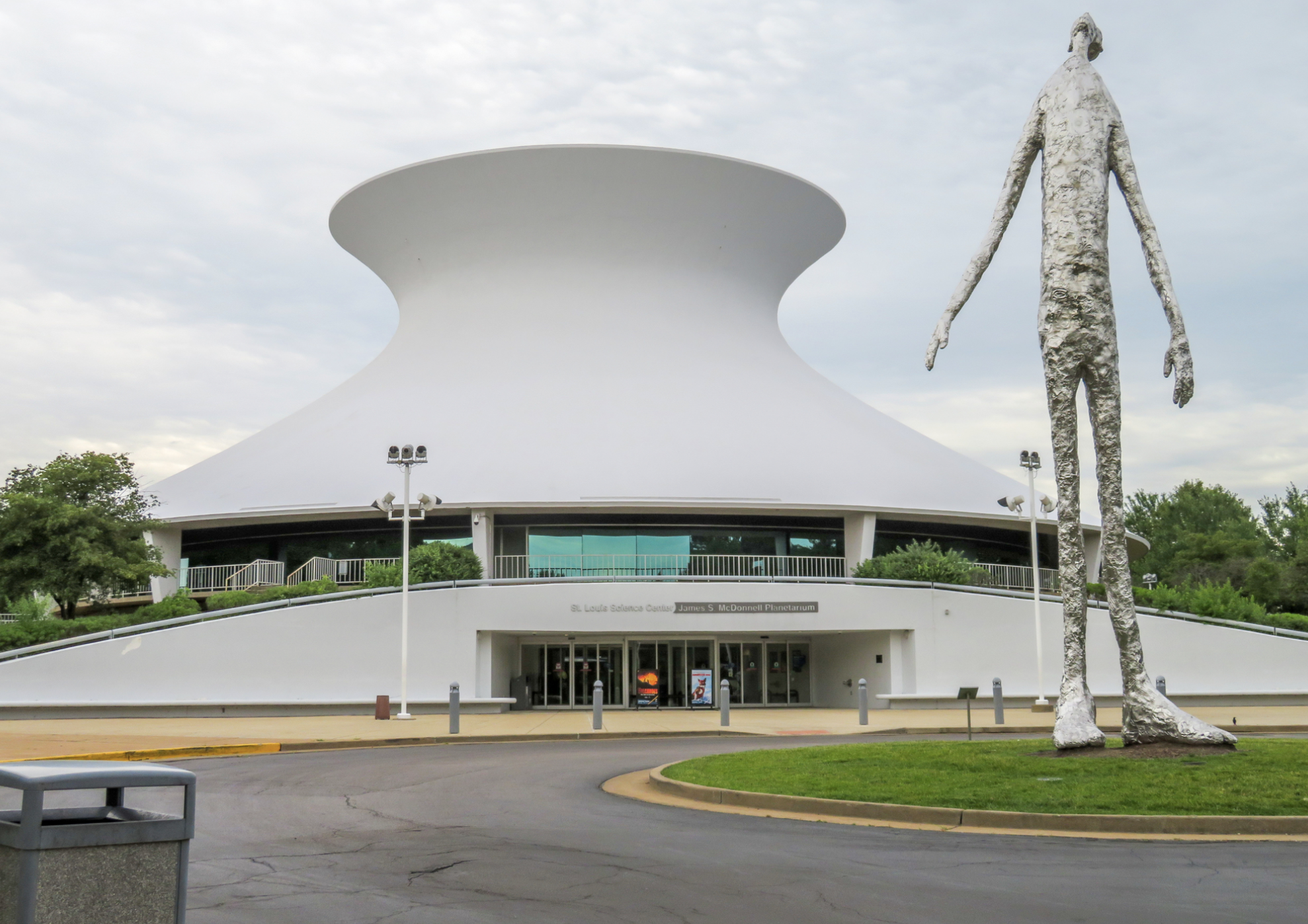 The James S. McDonnell Planetarium is a St. Louis icon. Located in Forest Park, a 1,300-acre public park, the planetarium is the main attraction at the Saint Louis Science Center, one of the few free nonprofit science museums in the country. It serves more than one million people each year. Opened in 1963, the planetarium features one of the world’s best opto-mechanical start projectors, which projects a 360-degree view of the constellations in the night sky onto its domed ceiling.

The giant, white structure is hard to miss, but its roof is hidden from view for those on the ground. The low-slope roof system and penthouse are nearly invisible behind a large, bowl-shaped parapet. The existing roof was saturated with moisture and was starting to develop leaks, and the planetarium’s dome-shaped screen and multimillion-dollar projection system could not get wet.

Bade Roofing was just finishing up a re-roofing project at a Science Center warehouse when the company was called in to take a look at the planetarium roof. According to Dave Bade, president of Bade Roofing, and Drew Bade, the project manager, the company determined a total roof replacement was required. They also identified some key challenges.

The 4,000-square-foot roof is unusual; it’s perfectly round, yet slightly bowl-shaped, with round penthouse in the center. The unique shape would make it difficult to design a tapered insulation system, flashings, and terminations for the 30-year project. Another difficulty was posed by the concrete step-offs located under the existing roof. There were no dimensions on the original plans, so creating the tapered insulation layout would be especially tricky.

The schedule was also complicated, as the planetarium would remain open throughout the construction process, hosting daily educational presentations for schoolchildren, as well as special events and exhibits. Work couldn’t take place during business hours.

“We had to work at night, craning stuff up there with big lights,” says Dave Bade. “The good thing was the guys couldn’t fall because they couldn’t go anywhere; the roof had an eight-foot wall around it. The safety plan was easy, but the tapered design was tough.”

Bade Roofing decided to go with a SureMB 120TG Base Ply as a temporary roof to ensure the equipment inside the building would be protected throughout the tear-off and installation process. “It was a secondary line of defense that allowed us to remove the entire roof all at once and not have to rely on tie-ins from the old roof to the new one when the crew started and stopped each night,” Drew Bade says.

The temporary roof allowed the company to accurately measure the existing roof for the tapered insulation design. “This is another reason we decided to use the SureMB 120TG; it allowed us to really see what was going on with the tapered and make adjustments prior to ordering,” notes Drew Bade.

The roof specified for the final phase of the project was a 90-mil VersiGard EPDM fully adhered system manufactured by Versico. “The Science Center and the architect both have a history of using EPDM on their projects because they’ve had a lot of success with it,” says Drew Bade. “And with the uncommon design and shape of this roof, EPDM was perfect to mold into all the unique angles and it did a good job conforming to the many curves of the building. We used a 90-mil EPDM to get the 30-year warranty the Science Center wanted and for the overall longevity of the roof.”

Once the crane and light towers were in place, crews began the loading and tear-off process. Crews accessed the roof through a window of the penthouse, but material had to be lifted in place with the crane. The typical workday began at about 5 p.m., and crews worked until 2 or 3 o’clock the next morning.

“We started by priming the concrete deck with CAV-GRIP 3V,” says Drew. “Then we installed the SureMB 120 TG Base Ply.”

The insulation was adhered in Flexible DASH low-rise adhesive. Crews installed a base layer of 2-inch SecurShield polyiso, which has a special facer, followed by a layer of tapered SecurShield polyiso. The drainage areas needed exacting care. “The drains were down in a concrete sump,” says Dave Bade. “We put the drawing right on the roof and cut out each of those sections. It was like cutting a pie into 50 pieces.”

Crews then installed Securock cover board, followed by the 90-mil VersiGard EPDM. “The EPDM did a great job conforming to the building’s angles and curves,” says Drew Bade. “We adhered the EPDM with Versico’s standard Bonding Adhesive because it’s got a long track record and it works.”

Once the tapered insulation was in place, the membrane installation was pretty straightforward, although the circular roof area posed some challenges with the details. “The counter flashings and terminations were kind of tough because everything had to be pre-bent to that radius,” Dave Bade notes. “It wasn’t a tight radius, but everything had to be pre-formed to that exact radius so you could keep constant compression on that membrane.”

The new system qualified for a 30-year warranty. “One of the main benefits of a Versico system, from a contractor perspective, is the support from Versico’s tech reps,” says Drew Bade. “It’s second to none; they make sure the job’s done right and they’re there every step of the way.”

The work was meticulous, and Bade Roofing’s experienced crews took great care to get it right. “The artistic part of it is the roof itself. It’s a shame that no one will ever see it,” says Dave Bade. “We did the work at night, so no one even saw our trucks.”

It’s a satisfying accomplishment to re-roof an iconic structure, even if no one sees you do it. “We really wanted to do this job,” says Dave Bade. “It meant a lot to us because we try to do things that are out of the ordinary. After being in business for more than 60 years, you like project like this because you get to show off your talents. And the men like stuff like this; the ones who got to work on this project, it really meant a lot to them. They are true professionals.”