NOTE: This article is intended to provide general information while conveying the importance of the roof deck as an integral part of a roof system. Additional information about specific effects and concerns in regard to roofing can be found in The NRCA Roofing and Waterproofing Manual and various roof-cover manufacturers’ design guides. 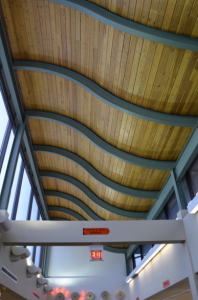 The roof deck is the backbone and an integral component of all roofing systems. Its main function is to provide structural support for the roof system and, therefore, is a building element that needs to be designed by a licensed design professional because proper support of the roofing above is critical to the roof system’s success.

There are many types of roof decks being installed today:

Some decks are covered with topping fills that become the base for the roof system and may also be an integral structural component:

Other deck toppings are available, such as poured gypsum and lightweight concrete with integral insulation, but these are considered substrate covers and not roof decks.

The most prevalent roof deck in the U.S. for commercial buildings is steel. On the West Coast, plywood/OSB is very popular. In addition to the roof decks already mentioned, in the course of roof-replacement work the designer may come in contact with the following: 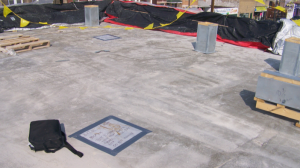 While the “plate” test is not a preferred method, it can quickly and inexpensively
give an indication of retained moisture in lightweight aggregate
concrete roof deck covers.

Collaboration with the Structural Engineer

Attachment methods of roof decks vary and also need to be discussed with the structural engineer. You should discuss nails versus screws, welding versus screw or pneumatic anchors, and how all of these will perform until the roof system is installed. You also must consider protecting the deck from thermal expansion and contraction. I have seen large roofs where the pneumatic anchors were “popping” out under the heat of the day, expanding the large expanses of steel roof deck beyond the strength of the anchor. Ping, ping, ping. I thought I was being shot at! 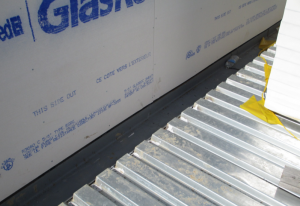 Coordination with the structural engineer is required to prevent conditions, such as this roof deck being held back from the wall.

Another consideration is the moisture content of the roof deck. Steel is basically zero while wood and concrete can be quite high. It is important for the roof system designer to coordinate with the structural engineer so the respective specification section can clearly define drying time of concrete. My current specification varies from structural concrete’s 60 days without major rewetting to four to six months for lightweight aggregate concrete topping.

There is currently a lot of discussion about lightweight aggregate roof decks and the soft aggregates’ ability to retain water for extended periods of time. Typically, this lightweight concrete is placed on a non-vented steel deck of precast concrete planking. The aggregate retains large amounts of water, and this water cannot dry downward. This downward drying is further compromised when a reflective roof cover is installed. Major litigation due to the formation of mold within these roof systems has occurred. Furthermore, if the roof system has been installed prior to acceptable drying, the roof cover has the potential to become the vapor retarder.

Several large legal cases have been made about roofs installed over lightweight roof decks that are not dry; moisture rises and condenses within the roof system, particularly reflective single plies. If the structural designer is leaning toward this system, it is important you as the roof system designer speak up and inform the design team of the long dry time required and that the roof system cannot be installed for months. (Venting base sheets can be used to vent the moist vapor as the concrete dries but require careful detailing and will be discussed in future articles about vapor barriers.) The National Roofing Contractors Association, Rosemont, Ill., and Midwest Roofing Contractors Association, Chicago, have excellent technical advice on this subject, and I urge you to review it.

Poured concrete roof decks (toppings) have the benefit of being monolithic and thus eliminate air infiltration through the deck material itself and/or the joints. Air infiltration can be a significant concern, especially on “wet” interiors, such as pools, kitchens and locker rooms, as well as facilities that have positive building pressures that force interior air to the exterior.

Way too many buildings are designed without parapets, resulting in a gravel stop condition, which I believe presents a rooftop safety concern for maintenance personnel. How does the roof deck fit in here, you might ask? Camber. Roof decks made of precast and steel set on long-span steel joints can have considerable camber (upward warping to accommodate loading). I have seen 4 to 5 inches and always get a good chuckle when the roof deck rises above the roof edge and the construction team is scratching their heads trying to figure out how to add the insulation and make a gravel stop work. It doesn’t. The roof edge typically has to be raised, at considerable cost. We won’t discuss who pays for this, but it would suffice to say the contractor installs what is designed. Be sure to ask the engineer if there is any camber. 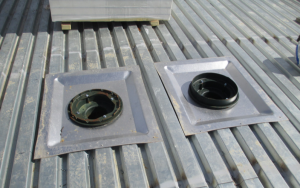 The roof system designer should work with the plumbing engineer to ensure the sump pans are provided by the roof
drain manufacturer.

Many structural engineers, while being able to design roof decks, are not aware of how they affect roof system design. If the low point is at a beam, it is tough to place a roof drain there. Thus, the roof drain is moved upslope away from the structural low point. You better know how to move the low point to the drain. (I’ll discuss how to do this in future articles about insulation design.)

The roof deck is an integral part of the roof system: Poor deck equals poor roof performance. Some key takeaways are:

Be the first to comment on "Roof Decks: Don’t Underestimate the Backbone of the Roof System"